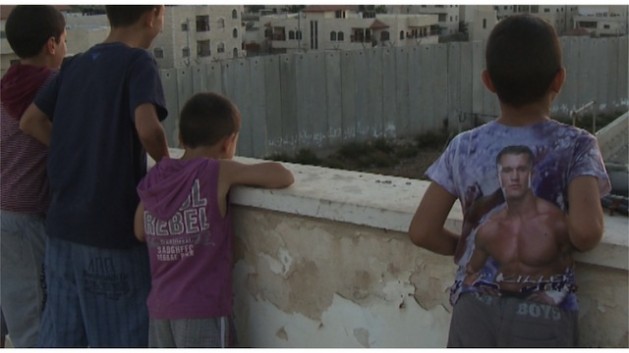 Children on the rooftop of the Shuruf family home. Credit: P. Klochendler/IPS.

AR-RAM, Occupied East Jerusalem, Oct 15 2012 (IPS) - Ali Shuruf turns on the lights, that shine into a gaudy living room. Beyond the window, the dominant colour is uniformly grey: the house stands literally against a wall. Not just any wall – the infamous eight-metre cement wall separates Palestinians from Israelis.

“From the salon, see – the wall; from the kitchen, from the terrace – always the wall. The wall encircles us east, west, and south,” says Ali Shuruf, a successful Palestinian building contractor, appropriately pointing at a budgie hopping in a cage. “We’re like birds in a cage.” His is a golden cage.

“Freedom stops here,” he notes. From the rooftop of the three-story mansion which he built with his brothers (each family has its own floor), Shuruf points at the shimmering lights beyond the eastern side of the wall: “Here, separation between Arabs and Jews.”

Neve Ya’akov, the adjacent Jewish neighbourhood, is, like Ar-Ram, located within Jerusalem’s municipal boundaries. Whereas Neve Ya’akov lies within the intramural perimeter, Ar-Ram’s on the outer side of the wall.

After Israel’s conquest of East Jerusalem during the 1967 war, urban planning involved the building of community, commercial, medical and sports centres, as well as schools, playgrounds and synagogues – for large-scale housing projects that were intended for the Jewish population.

As suburbs like Neve Ya’akov are rooted in the occupied part of town, what’s also required is a protective wall.

“We played soccer together. Now, we’re disconnected from each other,” says Fadhi Hijazi, a friend of one of Shuruf’s sons.

The separation wall was erected in the wake of the Palestinian Intifadah uprising (2000-2005), as protection against potential suicide bombers.

Ten years on, a 142-kilometre long barrier surrounds much of East Jerusalem, with only four kilometres of its completed length running along the pre-1967 ceasefire line. Israeli soldiers operate checkpoints to the city on both sides of the wall – none on that ceasefire line.

The new concrete ‘border’ not only separates Jewish neighbourhoods from West Bank towns and villages; it also cut through Palestinian neighbourhoods located within the city’s limits, leaving many residents who, like Shuruf, hold Israeli blue residency cards, on the other side of the wall, without access to Jerusalem.

“To visit my next-door neighbour, it takes an hour,” says Shuruf.

From this side, the wall isn’t just about security; it doesn’t only impede freedom of movement – it’s a policy, aimed at maintaining a Jewish majority in Jerusalem.

“The wall’s a racist thing that encourages hatred,” chimes in Muhammad Turman, Shuruf’s brother-in-law. “The problem isn’t the Israelis per se – we could live together in peace. No, the problem is who controls the city.”

The battle over Jerusalem is one for demographic control. While East Jerusalem is nowadays home to roughly 200,000 Israelis, it’s home for 300,000 Palestinians. But whole Arab neighbourhoods have de facto been excluded from the city by the wall.

Located on the route to Ramallah in the West Bank, Ar-Ram, with its 10,000 inhabitants, is such a neighbourhood. To reach the Shurufs by car from the intramural part of town is an exhausting haul.

One must either bypass the Jewish suburb Pisgat Ze’ev through the Hizme checkpoint, or drive along the wall for some ten kilometres towards the Kalandia gateway to Ramallah, and then make a U-turn and drive back along the wall’s other side.

“We don’t enjoy municipal services due to us – in healthcare, in education.” Shuruf explains that he had to enrol his children “in a local, poorer, school because of the wall.” “What do you tell your children?” asks Hijazi. “Al-Yahud, the Jews…” Shuruf awkwardly giggles.

Palestinian neighbourhoods suffer from chronic neglect, but the wall has exacerbated the grim socio-economic reality. According to the Association for Civil rights in Israel, 78 percent of the Palestinian residents of East Jerusalem – including 84 percent of children – are poor. About 40 percent of the men, as well as 85 percent of the women, are listed as unemployed.

When two years ago Shuruf suffered a major stroke, “the Israeli ambulance didn’t accept to come because of security reasons; neither did the Red Crescent ambulance, because it’s Israeli-controlled area,” recalls Hijazi. Eventually, as last resort, Shuruf relied on his family to be taken to the nearest Israeli hospital.

During the 1990s, the Oslo peace agreement divided the West Bank into three zones: Area A (under the Palestinian Authority); Area B (under Israeli security control and the Palestinian municipal authority); and Area C (under full Israeli rule).

De facto annexed by Israel, East Jerusalem was excluded from the Oslo division.

Palestinians who are walled in suburbs such as Ar-Ram have been left in limbo – in “Area B13”, as graffiti scribbled around the neighbourhood by local youth scornfully notes the undefined situation.

The wall further severs vital connections between East Jerusalem and West Bank Palestinian economic centres such as Bethlehem to the south and Ramallah to the north.

Traditionally a hub servicing the West Bank, East Jerusalem is now inaccessible for Palestinians without an Israeli permit. “Our life was in Jerusalem – not in the Palestinian part,” says Hijazi.

If disconnecting Palestinians from Jerusalem was a goal in putting up the wall, it’s actually bringing the opposite effect – pushing them back towards Israel. They don’t want to wait in queues at checkpoints. They want to work, to benefit from municipal services, to shop in the Israeli part of town.

Shuruf may pay municipal and other Israeli taxes, but he protectively rents another house inside Jerusalem proper just for keeping his Jerusalem ID, and thus enjoying medical healthcare – now a privilege – to which he was entitled as Jerusalem resident before the wall’s intrusion into his life.

“For us, it isn’t about wanting to be absorbed inside Israel which is at stake, but survival – holding on under Israeli occupation,” says Shuruf.