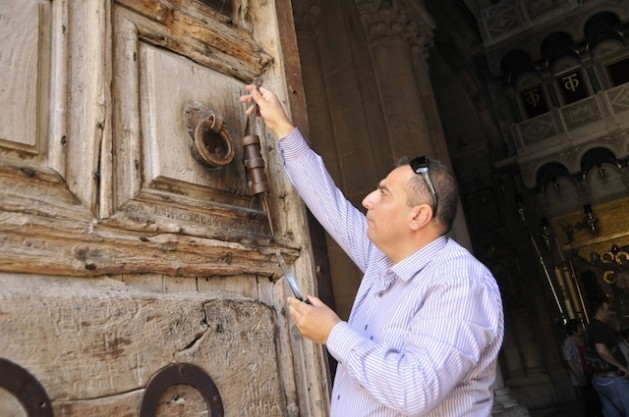 Adeeb Joudeh with the Key to the Church of the Holy Sepulchre. Credit: Pierre Klochendler/IPS.

JERUSALEM, Jul 29 2012 (IPS) - “A prayer knocks till the door opens,” a songster from the Church of the Holy Sepulchre sings from outside the door.

Inside the Church, Abuna Nicholas, the Greek monk on duty, limps towards the door, crosses himself along the Stone of Unction where tradition says Jesus’s body was prepared before burial, unlocks the loophole, and checks who knocks.

“Ismail Somrei!” announces the songster. The monk pushes a ladder out through the porthole. Somrei props it against the stone wall, climbs up. He still needs the keys, that are handed over to him by Adeeb Jawad Joudeh.

Joudeh is from a prominent Palestinian family. He is custodian of the keys of the Church of the Holy Sepulchre. And, he’s a Muslim.

If doors are emblems of ownership, keys are symbols of custodianship. “Since 1187 till today, we hold the keys,” Joudeh says. “My whole family stands with me at this door. This is home, my second home.”

But there’s more to custodianship. He who holds the key usually opens the door. Not here. Somrei, also a Muslim, keeps the keys on behalf of the custodian. He is “the keys’ bodyguard,” jokes Joudeh.

The complications here advance another step. While at night Somrei the keys-keeper often acts as doorkeeper, in the full light of day it is Wajee Nuseibeh, the door custodian, who officially opens and closes the door.

“We’ve inherited from father to son, generation to the next,” declares the middle-aged descendant of another notable Palestinian family.

Common wisdom also has it that “the key that opens is the key that locks” the door. That too, not quite here. The two padlocks solidly attached to the door fall under the doorkeeper’s prerogatives. “Nobody’s allowed to open the Church – just me and myself,” says Nuseibeh.

The two Muslim families got to keep the keys and the door because of quarrels within the Church. “Like brothers, we sometimes fight,” confesses the Very Reverend Father Samuel Aghoyan, Armenian Superior of the Holy Sepulchre. “The Churches wouldn’t go along with each other, so the key was taken away from the dominant Church and entrusted to a neutral monotheistic faith that embraces the Christ as a prophet – Islam.”

This is Christianity’s most sacred site, where Jesus was believed to have been resurrected – for many pilgrims, their most important destination. The belief is that the Church was erected on the Golgotha, the place of the crucifixion, and on the grotto where he was interred.

The Church itself is shared between three primary Christian custodians. Indisputably the most powerful, the Greek Orthodoxy controls the lion’s share. The Franciscans are said to be the wealthiest. The Armenian Apostolic Church is the less privileged.

“We relate to each other as brotherly as possible,” says Father Aghoyan. “Sometimes, there could be some misunderstandings on the boundaries or customs, for they’re not written in detail.”

Influence is measured according to whose church manages what part of the Church. In turns, Greeks, Franciscans and Armenians direct the pilgrims through the entrance to the Holy Sepulchre.

To the rear of the burial crypt on the opposite side of the Rotunda, Adel Masri unlocks a gate of iron latticework. “This is the holy head of the tomb!” he proclaims. Looking like a poor relation of their fellow custodians, the Copts, a Christian group that originated in Egypt, will soon celebrate their liturgy at this altar.

That status quo came in 1853, when it was decided that the Church’s common territory should be ruled by consensus amongst the Christian Brotherhood. But consensus is seldom reached. Ongoing disagreements have prevented important renovation works, such as of the Rotunda.

And, incidents continue unabated. Only four years ago during the Feast of the Holy Cross, a clash erupted between Greek and Armenian monks.

Caught between a rock and a hard – yet holy – place, the Israeli police are often trapped in brawls while trying to separate the parties involved.

Another visible symbol of the state of neglect is the Immovable Ladder left – sign of the status quo ante – on an inaccessible window ledge high above the Church’s entrance. Moving the abandoned ladder might be riskier than climbing it. Until today, a change of position is mutually agreed to be undesirable for it might disturb the status quo.

“The key custodian isn’t allowed to touch the door,” says Nuseibeh. “He should wait for me outside the Church, because nobody’s allowed to open it – just our family, the Nuseibeh family.”

“I do give him the keys,” Joudeh recognises impassibly. “He opens and shuts the door. But then he returns the keys to me.”

Beneath the veneer of civility, not every aspect of the calibrated interdependence between the keys custodian and the door custodian leads to courteous relations. The two have the following exchange:

“In the beginning, we were just one family to hold the Church’s keys,” asserts Nuseibeh.

“It’s been stipulated in the status quo, confirmed in 165 royal decrees or ‘Firman’ sealed by 27 sultans who ruled Jerusalem, acknowledged by the Churches, and also, I believe, by the State of Israel, that my family is entrusted as custodian to the keys of the Church,” Joudeh protests.

“Finally, in 1612, during the Ottoman era, another family received a ‘Firman’ and began working with us,” Nuseibeh grudgingly concedes.

“My family received the Church’s keys from the great Sultan Saladin in 1187 after he liberated Jerusalem from the Crusaders,” Joudeh fires back.

One cannot help but sense that the conundrum of the Church’s door, padlocks and keys is a mirror image of the balance of power within the Church itself.

The feuds which, at the Holy Sepulchre, continue plaguing the ecumenical relations between the Churches would seem to risk overshadowing the otherwise brotherly relations between the two scions of the distinguished Jerusalemite Palestinian families – if it was not for the sacrosanct status quo.

(This is the first of a two-part report on inner conflicts at places of worship in the Holy Land).