RIO DE JANEIRO, Jun 17 2012 (IPS) - It’s not true that developing countries conditioned the inclusion of the green economy in the final document at Rio+20 on clearly defined provisions for financing, the head of the Venezuelan delegation, Claudia Salerno, told TerraViva.

“That is an unfounded rumour,” she said. 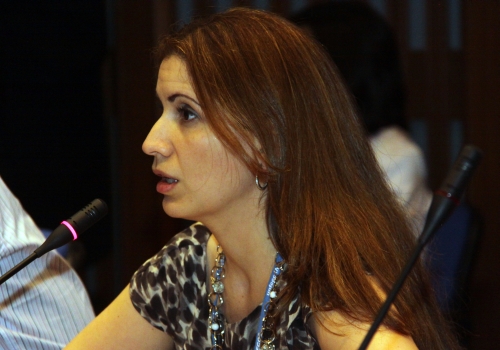 On Thursday Jun. 14, the Group of 77 (G77) developing countries plus China walked out of a core working group on the green economy, complaining that rich countries were standing in the way of progress on “means of implementation” – transfer of money and technology – for bringing about a change in production and consumption patterns.

On Friday, the talks hit an impasse in other areas, and on Saturday Brazil presented a document in search of consensus before the heads of state reach this city for the final three days of the U.N. Conference on Sustainable Development, Jul. 20-22.

Developing countries “started the negotiations on the green economy and the changes needed,” and they were going “marvellously well” until the debate reached the question of means of implementation, Salerno said.

How can it be possible “that we, with the fight against poverty that we face, are more prepared for that transformation than those who are supposedly in a better position to undertake the changes?”

The proposals for the greening of the economy that the industrialised North put on the table in January would have created new trade barriers, “which we have been fighting since then and have managed to modify,” she said.

The agreement “cannot destroy 20 years of negotiations in the World Trade Organisation and everything that has been adopted in terms of the environment because you are having a crisis,” she said, referring to the European Union.

However, the debate got back on track and the chapter on the green economy “is now one of the areas where agreement has been reached on the largest proportion of text,” she said. “Why hasn’t a consensus been reached on a single paragraph on means of implementation? Because the rich countries don’t want it.”

The world’s nations have agreed to limit the prescriptive approach to the idea of the green economy and replace it with green economy policies, recognising that countries must maintain the capacity to define how to adapt it to their specific circumstances, said Alex Rafalowicz, legal adviser to the Third World Network, which is closely following the debates.

The world’s leaders must decide “if a crisis or specific circumstances can keep politicians from seeing things with a 20-year perspective,” Salerno said. “Everyone has a different crisis. Europe complains about its own and keeps bringing it up, as a justification.”

Last week’s announcement of a 30 billion dollar fund “is an agreement, and we are not going to revise it. If they (the U.S. and EU) back out of what developing countries themselves raised as the big political banner at the climate change conference in Copenhagen, things are pretty bad.” But, “we have even seen that,” she added.

The delegations from Bolivia, Cuba, Ecuador, Nicaragua and Venezuela, which coordinate their positions in the Bolivarian Alliance for the Peoples of Our Americas (ALBA), had harsh words Saturday for the setbacks in the area of financing.

“The G77 pulled out of the talks on the green economy because it was ALBA and Bolivia that observed that the means of implementation are heading in such a mistaken, absurd direction that private charity has appeared as a source of financing,” René Orellana, Bolivia’s chief climate change negotiator, told TerraViva.

“We don’t know if they are mocking us or if they actually want to dismantle international cooperation,” he said. “Where does it say that the obligations undertaken in numerous international treaties are suspended during hard times?”

Bolivia “has hopes for the Rio+20 process,” but “we want to see a document that expresses the right to development, the rights of Mother Earth, harmony with nature, and an anti-poverty focus.”

Bolivia, Venezuela and other Latin American oil, gas and coal producing nations are facing a dilemma: how to achieve sustainable development with an economy based on “dirty” forms of production.

“We are heavily dependent on these non-renewable resources, and because we are vulnerable we cannot overcome that dependency overnight without the transfer of technology that is essential for moving from non-renewable to renewable energy sources,” Orellana said.

But, he added, “we are only responsible for 0.03 percent of all greenhouse gases…And suddenly they want countries that are not guilty of climate change to assume a huge responsibility in reducing emissions. If we do that from one day to the next, our countries will be left without any sources of income.”