UNITED NATIONS, Jul 27 2012 (IPS) - As U.N.-led talks on disarmament resume in Geneva Monday, calls are growing for nuclear-armed nations to cut spending on their stockpiles and instead divert resources to development. 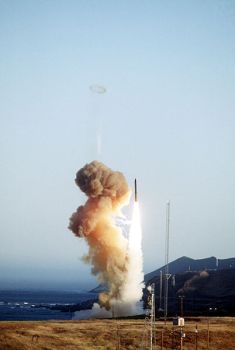 “The amount still being spent on nuclear arms makes no sense, just as continued reliance on the weapons themselves makes no sense,” David Kreiger, president of the U.S.-based Nuclear Age Peace Foundation, told IPS.

His remarks alluded to the fact that nine out of 193 U.N. member states continue to increase budgetary allocations for the maintenance and modernisation of nuclear weapons, despite promises to reduce their stockpiles.

Last year, the nuclear states spent around 105 billion dollars on their arsenals, according to independent estimates. The share of the United States alone was 61 billion dollars.

This cost calculation by Globe Zero refers only to researching, developing, procuring, testing, operating, maintaining, and upgrading the nuclear arsenal, not many other related activities. Global predicts the expenditures will most likely be the same this year.

That despite the fact that most governments continue to face financial constraints caused by the prolonged economic downturn and seem inclined to introduce further cuts in social services.

Considering that millions of people across the world suffer from hunger, disease and homelessness, Kreiger calls this trend to boost spending on nukes “obscene”.

“Nuclear weapons absorb resources that could be used instead to fulfill the Millennium Development Goals (MDGs),” he said.

U.N. experts say they want to raise over 400 billion dollars annually for development. But that amount is becoming increasingly hard to secure because most leading donor nations are not fulfilling their commitments.

According to the U.N., there is a shortfall of 167 billion dollars in Official Development Assistance, which is making it hard for developing countries to achieve all the MDGs by the deadline of 2015. That shortfall can be easily overcome by introducing drastic cuts in the cost of nuclear weapons maintenance and modernisation, according to peace activists.

“The nuclear-armed nations are spending around 300 million every day on their nuclear forces,” said Tim Wright of the International Campaign to Abolish Nuclear Weapons in a statement. “Obviously, there is a better way to spend this money than on weapons that threaten us all.”

Currently, the nuclear states are estimated to posses about 19,500 nuclear weapons, according to Critical Will, a non-governmental organisation that works with the U.N. closely on matters related to nuclear nonproliferation and disarmament.

Despite the new START (Strategic Arms Reduction Treaty) treaty signed in 2010, both the United States and Russia continue to update their existing arsenals. So is the case with Britain, France and China, as well as the four other de-facto nuclear powers.

While the five declared nuclear powers’ spending records are hard to pin down due to lack of transparency in certain areas, researchers say it is much harder to find accurate data with regard to nuclear weapons’ spending in de facto nuclear countries.

In the case of Pakistan, for example, which remains outside the fold of the Nuclear Non-Proliferation Treaty, there is no public accountability regarding the cost of nuclear weapons. It’s a state secret.

“I don’t know,” replied a Pakistani diplomat recently, in response to a question about the cost of his country’s nuclear programme. “Why don’t you talk to the U.S. diplomats and others? Are they telling their people how much money they are spending?”

His answer implied that figures made public by the declared nuclear states are not authentic either. But peace activists from the region counter this argument.

“All nuclear armed states launched their weapons programmes without the knowledge of their own people. This secrecy about what goes on inside nuclear programmes and how much they cost in public funds is an attempt to escape accountability,” said Zia Mian, who directs a project on peace and security at Princeton University.

“The first victims of the nuclear programmes are the people they are supposed to protect,” he told IPS, citing recent data which shows that Pakistan spends one percent of its GNP on health and education.

About half of the country’s population cannot read or write.

Kreiger said the failure of the leaders of the nuclear weapons states “to rid the world of these weapons displays nothing less than cruel indifference to those who suffer, while at the same time assuring that their own citizens remain targets of nuclear weapons.”

The U.N. disarmament conference will conclude on Sep. 14. The 65-member body, which reports to the U.N. General Assembly annually, sets its own agenda and works by consensus.

In the past, the conference has negotiated some major international agreements, including the Nuclear Non-Proliferation Treaty and Comprehensive Nuclear Test Ban Treaty.