WASHINGTON, Aug 24 2012 (IPS) - By mid-September, the Royal Dutch Shell Oil (Shell) group hopes to begin exploratory oil drilling in the Arctic Ocean off the coast of northern Alaska, provided it can secure federal permission from the U.S. government and overcome other logistical obstacles. But a prominent environmental group warns that drilling will do “irreparable damage” to the area.

The Natural Resources Defence Council (NRDC) published a reportMonday urging the U.S. government to oppose Shell’s drilling, citing concern, along with other green groups, about Shell’s inability to clean up and prevent oil spills. 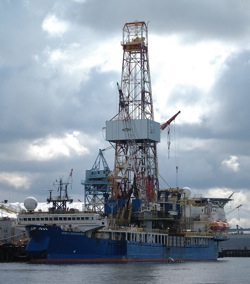 The oil drilling ship Noble Discoverer on April 5, 2012 in the Port of Seattle before its trip to Alaska for the summer Arctic drilling season. Credit: James Brooks/CC by 2.0

Pro-Shell groups and the Republican party criticise these organisations, however. They argue that oil found in the Arctic Ocean will lead to cheaper energy resources for more than a decade for the United States.

Shell has admitted that it cannot effectively clean up oil spills, and that its response barge, Arctic Challenger, may not be able to endure an Arctic storm.

“Shell can’t keep its drill rig under control in a protected harbor, so what will happen when it faces 20-foot swells and sea ice while drilling in the Arctic?” asked Dragon. “The company has admitted its drill rig can’t meet the standards required to avoid polluting Arctic air” and has “broken promises about its oil spill response plan and Arctic storm preparedness”.

Shell, on the other hand, is hoping to make the most of a fast-shrinking summer drilling timeline. If the company begins drilling now, it will have to stop by October at the latest, before the advent of the sea ice.

But the U.S. government and Shell are currently embroiled in negotiations, even as environmental groups hope that after the 2010 BP oil disaster in the Gulf of Mexico and a damning inspection that showed Arctic Challenger to be lacking in the electrical, piping and fire departments, Shell will not be granted permission for the summer drilling.

The NRDC report outlined  eight primary reasons why Shell should not be drilling for oil in the Arctic Ocean.

First and foremost is that the oil industry has a deplorable track record for oil spills that are never effectively cleaned up. One need not look far for examples. The British Petroleum, Gulf Coast oil disaster in 2010 is a vivid reminder of how wrong an oil spill can go, and how far-reaching its effects are.

Lawrence Neil, a spokesperson for the NRDC, pointed out that oil production is statistically almost guaranteed to lead to spills. Furthermore, “there is still no proven way to keep a drilling rig on location in the shifting pack ice of an Arctic winter,” so drilling in the Arctic presents even greater risks than those of a normal spill.

Marine noise created by production will have adverse impacts on marine mammals, added Neil. In addition, production will “create huge pressure for a pipeline to carry the oil (that could) lead to bisecting extraordinary wild lands and vital wildlife habitat.”

“The history of development shows that the camel’s nose is a real phenomenon:  the more you spoil pristine places, the less resistance there is to additional development,” he told IPS.

The lack of rapid response and infrastructure in the area is further cause for alarm for green groups, as well as the fact that an oil spill or even disturbance within the area could lead to the migration of wildlife. Among the species that would be threatened are endangered bowhead whales, female polar bears and birds, all of which depend on the icy ecosystem for survival.

But if Shell finds oil, a barrage of oil and energy companies will descend upon this pristine area. The NRDC report outlines many more drawbacks to the proposed drilling, including a rise in greenhouse gases.

Still, not everyone believes that the risks outweigh the gains.

If oil is found in this icy tundra, dependence on foreign oil could drastically decrease. Republicans say that an oil discovery in the region would create thousands of jobs and provide a much needed boost to the lagging U.S. economy.

Lobbyists and politicians are pushing for an extension the deadline for summer drilling, and Senator Lisa Murkowski (R-Alaska) is at the forefront. She is also a senior official at the Energy and Natural Resources Committee.

But Lawrence and other green group activists claim that the risks outweigh any political gain.

For Lawrence, it’s simple. “There are certainly more direct ways to reduce dependence on foreign oil than drilling our last pristine ocean,” he pointed out.

“Arctic drilling is a huge investment, including an investment of federal resources to regulate, police, and provide emergency services; every such investment detracts from – and undercuts – investment in sources of energy that don’t contribute to the risk of catastrophic climate change,” he concluded.