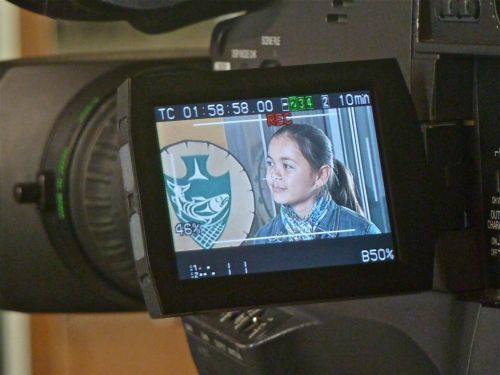 Reporters film Ta’Kaiya Blaney, a singer from the Silammon First Nation, whilst on location at Musqueam First Nation. Credit: Courtesy of Duncan McCue

UNITED NATIONS, Aug 6 2012 (IPS) - With the International Day of the World’s Indigenous Peoples coming up on Thursday, native communities are increasingly using media to challenge a legacy of stereotypes.

This year’s theme, “Indigenous Media, Empowering Indigenous Voices”, takes the international stage against a backdrop of the Second International Decade for Indigenous Peoples, from 2005-2015, titled A Decade for Action and Dignity.

The conference to be held at the U.N. Aug. 9 aims to highlight the importance of indigenous media in challenging stereotypes, forging indigenous peoples’ identities, communicating with the outside world, and influencing the social and political agenda.

Stereotypical representations have long afflicted indigenous peoples, often conveying ideas of a homogonous group rooted to the past and incapable of change within nations across the globe, which continue to rely on the power to overlook indigenous rights in order to make government policy workable.

Duncan McCue, a member of the Chippewas of Georgina Island First Nation in southern Ontario, has been a reporter for the Canadian Broadcasting Corporation since 1998, and is keen to press upon the mainstream media the importance of addressing the stereotypical portrayals of indigenous peoples.

In his role as adjunct professor at the University of British Columbia’s Graduate School of Journalism, he introduced last year an aboriginal journalism course titled Reporting in Indigenous Communities (RIIC) along with an open-source website, www.riic.ca, to instruct and facilitate fair reporting of indigenous issues.

On the RIIC website, McCue writes, “An elder once told me the only way an Indian would make it on the news is if he or she was one of the 4Ds: drumming, dancing, drunk, or dead.”

For McCue, stories that go beyond “the four D’s” and a “W” for warrior are more the exception than the rule.

“Aboriginal people are underrepresented in the news. When they are represented, it’s often through recurring frames – native-as-victim, and native-as-warrior/protester being two common examples,” McCue told IPS.

Recent coverage of the photo confirmation of the existence of “uncontacted peoples” in the South Eastern Peruvian Amazon is testament to the inclinations of the media towards sensation and spectacle when it comes to indigenous peoples.

“Here the media picked up on what was deemed to be newsworthy or attention grabbing at least in terms of the visual impact and sensational story of the confirmation of the existence of ‘uncontacted’ peoples – people naked but for red paint shooting at a plane with arrows,” Sheila Aikman, senior lecturer in education and development at the University of East Anglia, told IPS.

The exotic images have served as a news peg from which to hang stories that spotlight the challenges to the lives of the Mascho-Piro in the Alto Purus region of Peru from encroaching tourism and resource exploitation.

But Aikman, whose key research interests lie in intercultural education and the indigenous movement, is measured in her approbation of the blanket media coverage, voicing her concern that “at the same time the articles still seem to draw on the most basic of stereotyping”.

A resource for busy reporters

In his message for the media-themed International Day, U.N. Secretary General Ban Ki-Moon called upon “Member States and the mainstream media to create and maintain opportunities for indigenous peoples to articulate their perspectives, priorities and aspirations.”

McCue sees initiatives like the RIIC website, open to journalists across the globe, as a starting point for improving reporting in indigenous communities.

The task of improving coverage in a market-driven industry, constrained by time and resources, and with the constant pressure to produce news that sells, presents a hefty challenge.

But McCue is optimistic, “I am convinced that offering journalists training to report in Indigenous communities can improve coverage of those communities,” he told IPS.

“I know reporters are busy. (The website) is written for reporters, by a reporter, framed from the perspective that there are inherent challenges every day in reporting news, but that we can adapt our practices and our perspectives in the newsroom to better accommodate Indigenous people we report on – and that can only improve our stories,” he told IPS.

“I hope www.riic.ca is the beginning, not the end of a conversation, about the ethics and practice of reporting on Indigenous peoples, and that we can find resources to continue creating a site that will encourage that conversation,” he told IPS

Reflecting on his own experience, McCue told IPS, ”Things are getting better. There are more young Aboriginal journalists then when I started 14 years ago, though we’re still underrepresented.”

Pointing towards low Aboriginal enrollment numbers, McCue pressed the point that, “Journalism schools across Canada haven’t done nearly enough to encourage Aboriginal students to get into the profession.”

“In Canada, APTN continues to be a strong option for Indigenous reporters who want to tell our stories,” McCue told IPS.

But there is a strong need for mainstream newsrooms to do a better job of encouraging Indigenous applicants through internships and ensuring there is extra support available in the newsrooms for young Indigenous reporters, according to McCue.

Asked about the role of media in the struggle for self-determination, McCue told IPS, “Ultimately, it is up to us as Indigenous peoples to honour our ancestors and their teachings, by living and breathing self-determination every day.

“That said, the fight for Indigenous self-determination is many-faceted, and media are a powerful tool – both our own media and mainstream media – to share our stories, promote understanding, and press for accountability of both state governments and our own Indigenous governments,” he said.