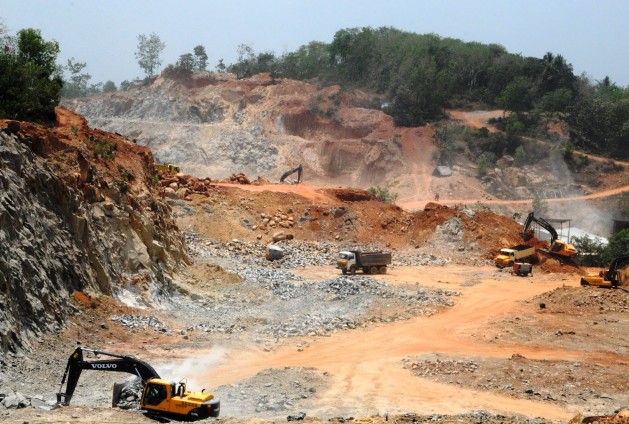 Quarrying on a hill outside Thiruvananthapuram. Credit: K.S. Hari Krishnan

THIRUVANANTHAPURAM, India, Sep 28 2012 (IPS) - After more than a century of fighting sea erosion by massively dumping granite boulders along the beaches of southern  Kerala state, environmentalists and administrators are beginning to see that this has been a costly and ineffective solution.

Since 1890 when granite blocks were first used to construct a 1.5 km sea wall  near the pilgrim town of Varkala, entire hills have vanished and vast pits gouged out to extract a mineral that is also in high demand by the construction industry.

Ajayakumar Verma, a senior scientist at the Centre of Earth Science Studies in Thiruvananthapuram, told IPS that unregulated quarrying of granite is beginning to have a perceptible impact on Kerala’s unique ecosystem formed of high rocky hills and a network of rivers and backwaters leading into the sea.

Kerala is home to the Nilgiri Biosphere Reserve and the Agasthyamalai Biosphere Reserve, both recognised by United Nations Educational Scientific and Cultural Organisation as regions of  biological and cultural diversity that need protection while promoting sustainable economic development.

“Mass quarrying is a destructive activity which leads to minor tremors. A balanced stone quarrying policy, taking into account the needs of both the construction industry and coastal protection, is needed,” Verma said.

After a 1989 assessment by the Central Water Commission deemed that 480 km of Kerala’s 560 km coastline was vulnerable to erosion, massive stone quarrying work has been going on, using high explosives and heavy equipment.

So far, 331.80 km of seawall have been constructed in an exercise that amounts to moving entire hills to the coasts.

Legal experts say that quarries are being operated under laws framed during the early 1960s when advanced technology and heavy equipment needed for massive quarrying were not available and extraction was naturally slow work.

Nazeer Ahamad, a Kochi-based environmental lawyer, says there are so many loopholes in the existing mining rules and regulations that it is virtually open season for quarry contractors. “For a start, permission should not be granted for operation of large quarries,” Ahamad said.

A group of disaster management experts has proposed setting up of exclusive quarry zones, but it was opposed by environmental activists on the grounds that it would only legitimise the plundering of granite.

John Peruvanthanam, president of Kerala Environmental Protection Council, told IPS that for the most part experts were making proposals without first conducting serious geophysical studies in one of India’s most thickly populated states.

“The increasing incidence of tremors in Kerala already shows the vulnerability of the land to seismic activity. It is not even being considered that many of the quarries are located close to dams and threatening to weaken them,” Pervanthanam says.

Officials are unable to say exactly how many quarries are currently in operation, but green activists calculate that there about 18,000 units with only 8,000 of them licensed.

Omana Velu, 65, a widow who lives in Mookkunnimala, a hilly area near this city, says she lives in constant fear of being hit by flying rocks because of incessant blasting in the nearby illegal quarries.

Omana and her neighbours have petitioned the government to have the quarrying stopped in the area, officially designated as rubber growing area since 1960.

K. V. Sajeev, who spearheads the anti-quarrying campaign in Mookkunnimala,  said petitions like Omana’s are routinely ignored because of the existence of a powerful nexus among bureaucrats, politicians and quarry operators. “There is a Kerala High Court order banning the mining and even that is being ignored.”

After visiting the Mookkunnimala quarries in June, V. S. Achuthanandan, leader of the opposition in Kerala’s legislative assembly, told media: “The state government should immediately implement the high court ban on quarrying and take on quarry owners who are threatening the local residents.”

The worst indictment of mass quarrying for seawall building comes from an expert committee led by the eminent agricultural scientist M. S. Swaminathan that advised the government in bringing out coastal regulation zone laws in January 2011.

“Over a period, it has been concluded that there is more harm done to the coast by these seawalls since they disturb the natural sediment budget, which leads to erosion in adjacent coastal areas,” the Swaminathan committee report said.

The report recommends “soft engineering measures” such as encouraging the growth of coastal vegetation, especially mangroves, as protection.

“The 2004 Asian tsunami proved beyond doubt that only mangroves can break the force of the waves,” says C.R. Neelakantan, an environmental activist and convenor of the National Alliance of People’s Movements. He points to the high maintenance costs incurred by the state government on repairing seawalls damaged by wave action.

Neelakantan says drastic, but appropriate, conservation measures are needed “because it is now apparent that a rise in sea level due to global warming presents a new threat to Kerala’s coast.”

“Kerala’s coasts are lowland areas and, therefore, prone to inundation if sea levels rise,” E.J. Joseph, senior scientist at Centre for Water Resources Development and Management in Kozhikode, told IPS. “This will affect ground and surface water in Kerala through increased salinity.”

A report published by the central government in June and submitted to the United Nations  Framework Convention on Climate Change identified Kerala as one of the states threatened by rising sea level.

“It is estimated that a sea level rise by 3.5 to 34.6 inches (8.8 to 87.8 cm) between 1990 and 2100 would result in saline coastal groundwater, endangering wetlands, and inundating valuable land and coastal communities,” said the report.