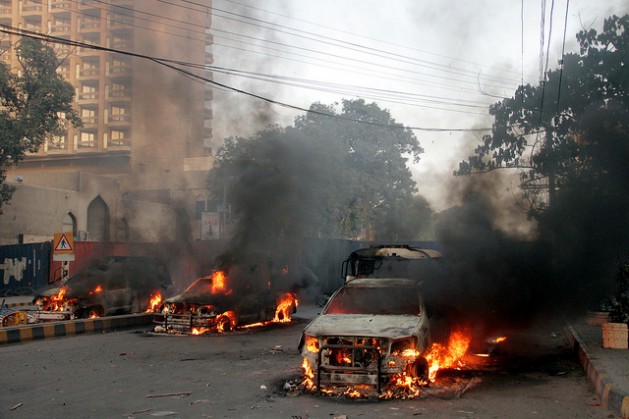 UNITED NATIONS, Sep 24 2012 (IPS) - When the United Nations commemorated International Day of Peace last week, the celebrations were marred by news of widespread rage in the Islamic world, a continued bloody civil war in Syria, suicide bombings in Iraq and Afghanistan and violent demonstrations in Pakistan, Indonesia and Bangladesh against a video caricaturing the Prophet Muhammad.

“As we gather today to celebrate peace,” Secretary-General Ban Ki-moon said Friday, “the world is facing global protests and violence in response to another ugly attempt to sow bigotry and bloodshed.”

“Deliberate and obnoxious acts of this type should be deprived of the oxygen of publicity,” she urged.

At a panel discussion during a recent High-Level Forum, Mario Lubetkin, director general of the Rome-based Inter Press Service (IPS) news agency, said the General Assembly in its 1999 Declaration on the Culture of Peace had called for better understanding, tolerance and cooperation among people, through, among other things, an appropriate use of technology and flow of information.

That resolution, adopted by consensus, also supported the important role and contribution of the media in the promotion of a culture of peace and ensured press freedom, as well as freedom of information and communication.

“Thirteen years later, can we affirm that this resolution is outdated, or is not valid any more?” he asked.

“We could either assess critically that in those days the internet was seen as ‘just a tool’, or consider the dimension that the internet had in changing human behaviour,” Lubetkin said.

In any case, he added, “we can clearly affirm that the values and ideas that the General Assembly promoted in 1999 are still completely valid today, in September 2012.”

The point here is not the tools, but the contents, what to convey, because the paths have exponentially multiplied, and this task cannot be a responsibility of a single organisation, or a single country or community, Lubetkin pointed out.

“It is to have the capacity to generate all kind of partnerships, to help boost the ideas of participatory communication, to generate more awareness around the issues of culture of peace, among more millions of people,” he said.

“But when we refer to partnership, we cannot only think about the action of the media, which are undoubtedly a key element. Our experience shows we are now on a new phase of partnership, in which the media, civil society, the national and international organisations have to be active partners, since communication is the responsibility of everybody, and not only of experts.”

“Our experience at IPS, a global news agency born nearly 50 years ago, shows it is possible to advance with information contents focused on the culture of peace, to better communicate on a global level,” he added.

“Our strong growth in the internet sector in the last years, with these contents, with millions of page views and millions of readers, shows that more and more people are concerned about those issues,” Lubetkin declared.

Dr. Natalie J. Goldring, a senior fellow with the Security Studies Program in the Edmund A. Walsh School of Foreign Service at Georgetown University, told IPS that at its best, mainstream media outlets serve as honest brokers, investigating the claims of governments and individuals, with the power to disseminate those results and hold people to account.

Unfortunately, many newspapers have reduced their international coverage in recent years. Some have closed their international bureaus. And mainstream media seems increasingly prone to following the story of the day, rather than giving consistent attention to important global issues, she added.

The continuity that IPS provides gives significantly more depth to these stories than would otherwise be the case, said Goldring, who also represents the Acronym Institute at the United Nations on conventional weapons and arms trade issues.

The concept of a culture of peace integrates themes from disarmament, conflict resolution, and human security. It is an incredibly ambitious undertaking, but it’s also an extremely important one. Each of the themes of a culture of peace will require sustained effort on the part of the world community, she noted.

Goldring said the media can also contribute to efforts toward disarmament by covering – and often amplifying — the work of non-governmental organisations (NGOs).

Unfortunately, many media outlets give far more attention and credibility to the statements of governments than to NGOs, she complained.

Across the globe, NGOs are often doing the critical work on the ground to try to prevent conflicts, reduce the costs of conflict when they occur, and to aid with conflict resolution efforts.

NGOs have also been responsible for bringing international attention to issues such as the widespread illicit trade in small arms and light weapons, and the devastation they cause, she added.

Achieving disarmament will require continuing efforts by governments and civil society. The media can aid in this effort by helping to publicise successes and failures along the way.

Sharing accounts of successes in one region can increase the prospects of success in other regions, for example, as governments and civil society learn from each others’ efforts. International media sources can provide the information necessary to aid these efforts, Goldring declared.

Cora Weiss, president of The Hague Appeal for Peace and former president and current U.N. representative of the International Peace Bureau, said, “The amazing support that IPS gave to the High-Level Forum on a Culture of Peace certainly helped to mobilise the crowd that filled the General Assembly and conference rooms later. The use of the graphic was creative and compelled the reader to read more.”

After singling out some of the threats to peace – including high military spending, global warming and violence against women – Weiss told delegates there’s also good news.

India and Pakistan have signed a new visa agreement; peace talks between the rebels and the Colombian government was taking take place in Oslo; and Cuba, Venezuela and Chile are working together to make these welcome peace talks happen after over 50 years of armed violence.

“The United Nations has decreed an end to slavery, colonialism, and apartheid. It has unanimously called for a Culture of Peace. Its mission is to ‘save succeeding generations from the scourge of war’. It is time to abolish war,” she said.