Water for Phosphate, Not People 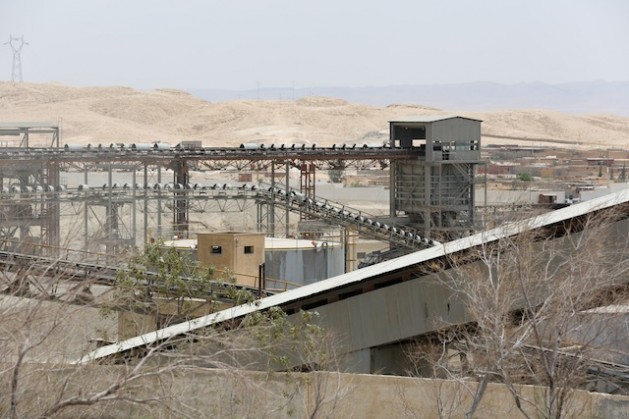 The phosphate plant southwest of Gafsa in Tunisia gets more than enough water, unlike the people in the region. Credit: Elijah Nouvelage/IPS.

GAFSA, Tunisia, Sep 22 2012 (IPS) - Gafsa region in the south of Tunisia was once an oasis; today the phosphate industry has plunged it into a water crisis.

“This summer for the first time we had water cuts on a daily basis,” says Lakhdar Souid, coordinator of the Blue Plan for a Green Tunisia. “Gafsa (343 km south of capital Tunis) and the neighbouring towns were deeply affected.”

“International experts warn that by 2025, North Africa will witness a water war. I believe if the matter is not taken seriously by the current transitional government, such a scenario will happen earlier in Tunisia,” says Souid.

The official reason for water cuts given by the minister for agriculture, hydraulic resources and fisheries, Mokhtar Jalleli, is that the National Tunisian Electric and Gas (STEG) had power outage in several centres during periods of heavy consumption.

Souid says that ever since Tunisia’s independence from France in 1956, successive governments have privileged the development of the north, around the capital, and the Mediterranean coastline, which has left many inland regions marginalised.

This has been the case with the mining region in the south, particularly near Gafsa, home to some 369,000 inhabitants. Last month, people protesting water cuts clashed with police forces during the heat wave in the holy month of Ramadan.

Some 98 kilometres from Gafsa city, Sidi Bouzid is the hometown of Mohamed Bouazizi, the vegetable street vendor who set himself on fire after being constantly harassed by the police in December 2010. His death sparked a wave of unrest that toppled the regime in Tunisia and spread to other Arab countries.

Local people say the water issue has been an everyday reality for decades, ever since the creation of the Compagnie des Phosphates de Gafsa (CPG) in 1897.

“Tap water is contaminated by chemicals produced by the phosphate plants,” Hayat Benrejeb, who lost her husband to lung cancer three years ago and lives in Gafsa’s old quarters, tells IPS.

Benrejeb says the problem is a “time bomb waiting to explode” because school children are suffering increasingly from asthma and pneumonia, illnesses that could only be explained by the presence of sulfuric fumes.

CPG’s mining operations are mainly based around the deposits in the Gafsa basin located in the south of the country, north of Chott el Jerid. The company produces eight million metric tons of merchant-grade phosphate annually.

This production is also vital for the domestic industry for phosphoric acid and fertiliser production through the Groupe Chimique Tunisien (GCT) headquartered in the Mediterranean port Sfax, 190 km from Gafsa city.

“Water supply and pollution issues alike have deepened over the years after high volumes of water started being pumped for the local chemical industries,” says Benrejeb. “Our region did not benefit from any profit made by these companies. We only inherited the ills left behind.”

Now, most people have to buy mineral bottled water for daily consumption, she says.

“The anarchic exploitation of the regional natural resources and the use of the springs for industries has led to an imbalance in development, with some areas totally marginalised for too many years,” Farid Zaigh, chairman of the Association for the Revival of Gafsa’s Roman Pools tells IPS.

“Young people use to organise swimming shows and earn money to help their families. Tourism was booming around the pools. Now the pools have dried; our children cannot learn to swim. No water, no life.”

Deep drilling has damaged the water table in the city and its surrounding oasis, Zaigh says. “The former authorities allowed private drilling up to 52 metres. Recent official inspections have shown that these drillings, meant for agriculture, have not respected this protective limit.”

Civil engineers and geologists native working with Zaigh’s NGO says the water has been drained towards the chemical plants. The Compagnie des Phosphates de Gafsa (CPG) has now agreed to sponsor a technical study aimed at rebuilding the ancient pools.