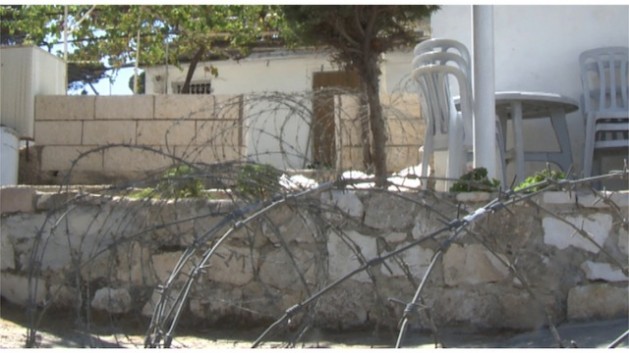 The settlers’ part of the divided home as seen from Filistin Hamdallah’s side. Credit: Pierre Klochendler/IPS.

RAS EL-AMOUD, Occupied East Jerusalem, Sep 17 2012 (IPS) - Filistin Hamdallah looks disoriented, walking without purpose amidst the furniture strewn in the courtyard, as if she was moving home. Only the fresh laundry hanging on wires indicates that the Palestinian family is here to stay, to stay in conditions with Jewish neighbours that show just how difficult the divisions in Jerusalem can be.

Two weeks ago, escorted by Israeli policemen, settlers moved in. “The District Court ruled that Jews are entitled to move us out of parts of our home,” the mother of five recalls.

“This house never belonged to them,” retorts Yishai Fleisher, a Jewish neighbour from Ma’aleh Ha-Zeitim, an adjacent fortified compound almost protruding over the house. “They stole it and we’re pushing them out. We’re the rights holders of this piece of property,” he claims.

When Jews and Arabs fought the first round of their long conflict over the city’s sovereignty during Israel’s war of independence (1948), East Jerusalem (including the Old City) was conquered by the Hashemite Kingdom of Jordan.

Jewish residents of East Jerusalem were forced to evacuate their homes, and moved to the western side of town then controlled by the nascent state.

The land on which the contentious house stands was subsequently registered in the Jordanian Land Registry Bureau. In 1952, the Hamdallahs were granted squatters’ rights by the Jordanian authorities.

In June 1967, as Israel captured the eastern part of the city, Israeli law, jurisdiction and administration were one-sidedly extended to the Palestinian neighbourhoods. Yet, the international community has never condoned the Jewish State’s de facto annexation of East Jerusalem.

Since then, within the historical centre of the holy city and in surrounding Palestinian neighbourhoods, a low-intensity battle by means of Israeli laws has been waged by Jewish right-wing groups – over land and real estate abandoned by Jews in 1948.

In 1990, Irving Moskowitz, a U.S. Jewish tycoon bought the property – according to Israeli law, legally – from Jewish studies institutions.

These religious organisations had themselves purchased the land on which the contentious house now stands during the Ottoman rule, long before Israel’s inception. In 1967, they filed a claim. As a result, the Israeli District Court declared the Jordanian land registration null and void.

In 1992, Moskowitz’s emissaries filed a petition in order to evict the Hamdallahs. In 2005, the Court ruled that the Palestinian family could stay in parts of the house built before 1990. Meanwhile, the Hamdallahs argued that they maintained the right to stay in the whole premises.

After years of judicial wrangling, the court order was upheld, and earlier this month, the Hamdallahs were finally required to vacate a 15 square-metre storage annex and a two-room cottage which go with the property.

The divided structure must now be shared with Jewish joint-tenants associated with a settler group supported by Moskowitz.

“I’m angry and I’m afraid. I’m afraid that they’ll take the whole house. We don’t have a second home. I’m afraid for the kids. Where shall they go?” Filistin Hamdallah mutters anxiously.

Her sister-in-law, husband and child have already left the two-room cottage in which they used to live, and have moved to another neighbourhood.

“They do what they want,” chimes in Filistin’s husband, Khaled Hamdallah, a truck driver, showing a dirt path leading to the off-limit bungalow. “The kids are forbidden to walk there.”

A security guard is posted in the courtyard 24/7.

The remaining 12 members of the extended Palestinian family are now prohibited to trespass on the territory now marked by a puny fence – laid by the settlers who haven’t yet occupied their share of the house – that now draws some nondescript borderline beyond the pale shadow of a couple of frail trees.

But good fences don’t necessarily make good neighbours. Here, Palestinians residents and settlers alike share the feeling of being surrounded and besieged by each other.

“We don’t talk to the settlers,” confides Khaled Hamdallah. “It’s forbidden to get close to them. If anything happens, they call the police.”

“We live with defences against those people who’d undermine our rights,” maintains Fleisher. “That’s how we live in East Jerusalem. You’ve got to carve out your niche. If you’re a sissy around here, you get squashed like a bug.”

The one-floor structure is flanked on three sides by Ma’aleh Ha-Zeitim. Since 2003, some 90 Jewish families have moved into the residential settlement built by Moskowitz.

The recent intrusion is part of a grander scheme – to expand Ma’aleh Ha-Zeitim, already the largest settlement within Palestinian neighbourhoods in East Jerusalem.

“Our motive is clear,” explains Fleisher from his balcony. “We want to settle the Land of Israel; to take back Jerusalem; to assert Jewish sovereignty here; to liberate it from people who’ve taken it illegally. We aren’t going anywhere. We have staying power.”

His is a balcony with a view – not only on Jerusalem’s disputed Jewish and Muslim holy sites; not only on the antique Jewish cemetery that lies on the slopes of the biblical Mount of Olives.

Three floors below, a Palestinian social club affiliated to the nationalist Fatah party is a hive of activity. “Sadly, some of the ideas that are inculcated to the youth there are ideas that I think aren’t good for their future,” says Fleisher.

“No Palestinian deserves pieces of sovereignty over any of this land. This isn’t Palestinian sovereign land; this is ancestral Jewish land,” Fleisher raps out. “We fought wars to prove our determination; we fought off enemies. We’ll continue to fight – in the courts,” he adds.

“But we’re not here to evict everybody,” he cautions.

Not everybody. Still, other Palestinian neighbourhoods which, before Israel came into existence, were also inhabited by Jews, have become prey to similar endeavours, thus jeopardising the prospect – however slim – of a two-state solution in Jerusalem in the future.

“East Jerusalem the capital of a Palestinian state – what a suicidal idea!” exclaims Fleisher.

(This is the first of a two-part report on the battle being waged by Israeli settlers over land and real estate within Palestinian neighbourhoods in East Jerusalem.)