A War Writ Small On the Other Side 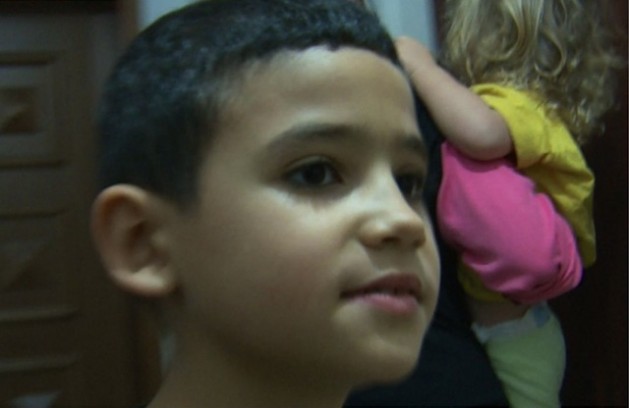 ASHDOD, Southern Israel, Nov 20 2012 (IPS) - Overhead on a bombing mission, an Israeli Air Force F16 screams its way towards Gaza. On the street, the fighter jet’s shriek is covered by a plaintive sound – a “red alert”. Within seconds, an “Iron Dome” anti-missile missile launched roaring in a spark of light intercepts the incoming GRAD rocket.

“It isn’t safe for the children here. We’re leaving the city for the day; we’re coming back this evening. We don’t have anywhere else to stay,” laments Elisheva Pinto, with her daughter Chava, 13, and her son Arieh, 11, at her side inside the central station’s shelter, waiting to board a bus to Jerusalem.

Schools are closed for a fourth day. Playgrounds are empty.

The day before, on Saturday, the tenement building located on Independence Avenue, 93, in the centre of this working class city of over 200,000 people, sustained a direct hit. No one was killed.

Property Tax Authority assessors have come to evaluate the damage. The rocket hit an apartment on the fourth floor. The flat’s a wreck. A gaping hole on the wall of the balcony; shrapnel on the walls of the living room are testament of the rocket’s trajectory.

A myriad of broken shards of glass are strewn on the floor, mixed with pellets of metal. When the rocket exploded, countless pellets scattered, pierced through bonnets of cars parked in the street down below, maximising the devastation.

Remnants of frozen life are everywhere. On the dining table, a framed family portrait – a couple and their two young daughters – has been tossed away by the blast on a plate containing the leftovers of a modest sabbatical lunch of rice, lentils and spring chicken.

The Elikashvilis, the tenants, have been evacuated to a hotel in Ramat Gan, a suburb of Tel Aviv, 30 kilometres to the north. The landowner reports to the assessors just as a news bulletin on the radio reports that Tel Aviv has also been targeted.

Another “red alert” resounds in the living room. The visitors leave the useless apartment, and run through the corridor to the building’s staircase which serves as shelter for most residents. Some have preferred to stay in their private shelter. In recently-built construction, the law requires that each flat be equipped with a protected room.

Two floors below, the Amsaleg family – the grandparents, the mother and her two small children Natanel and Ilay – cuddle together under the dim light. “This is not life!” Annette Belladev, the grandmother, protests.

End of alert – the Amsalegs returns to their three-room apartment.

Natanel is hungry, hasn’t eaten for a day. He prepares himself a slice of toasted bread with cream cheese at the kitchen table. “I’ve been sick vomiting because of the missile,” he says. “You’ll be fine, right Natanel?” his mom, Dvora, comforts him, brushing his cropped hair with her hand.

And yet there’s another alert, Natanel cuts short his quick snack and he, his younger brother, mom, “grandpa and ma”, all rush back to the staircase. They’ve got 30 seconds to take shelter before they hear the far away explosion. The air trembles.

November 20 marks Universal Children’s Day. United Nations Secretary General Ban Ki-moon is in Jerusalem and Ramallah (in the West Bank) to assist the current ceasefire efforts. “A day of fraternity and understanding between the children of the world,” is the blessing, and the wish, put up on the UN’s official website.

Since the start of the “Pillar of Defence” operation launched by Israel on Hamas in Gaza on Wednesday, at least 24 Palestinian children have been killed by Israeli fire in more than 1,400 Air Force and Navy raids, according to Palestinian health officials; more than 200 have been wounded. One Israeli child has been wounded by Palestinian fire during one of some 1,200 rocket attacks.

Here in this port city, on an average day, children and their families live under the threat of ten rocket attacks launched by Palestinian militants from Gaza, just 23 kilometres away.

No one in Ashdod will pretend that Israeli children suffer the same predicament as the one endured by the children in the Gaza Strip. But fear and pain makes you blind and oblivious to the other’s pain and fear, and selfish.

Natanel is nine years old today. He looks around the staircase at the sound of the alarm, his face convulsed in a final moment of terror, in some sort of silent supplication. “We’ll celebrate your birthday when all this is over, right Natanel?” mom comforts her son.

“What do you wish for your birthday?” she asks him. “I wish that Israel kills all the Palestinians, all of them, and their children as well,” he answers impassively.

This is the story of a war writ small by young, unforgiving people.

“You shouldn’t say such awful things,” Natanel’s mother protests, “Jews and Arabs, we’re all human beings. Like us, they’re stuck in an impossible quagmire. Just like us, they didn’t ask for it.”

Natanel imperceptibly nods his ascent. Unlike the adult role model who kisses him, he seems to be feeling very little for “the other side”.

When quiet sets in again, the day is spent gazing at the television, preposterously watching the news announcing what’s happening right here, at home: Israel’s ferocious assault; the destruction of an incoming rocket by the “Iron Dome” battery located on a hillock on the city’s outskirt.

Natanel is bored: “I wish I’d go to school and play. I miss my friends.”

Another rocket attack – it’s the third one in one hour – and another rocket interception. Looming over the sea, a cloud of white smoke stains the immaculate sky.

Ten minutes later, the routine of life takes over from matters of life and death. Natanel is back at the kitchen table, butters another slice of toasted bread. “So, when shall we organise your birthday party, Natanel?” asks Dvora, preparing a hot cocoa. “In one month,” he murmurs, “When the war’s over…” (ENDS)