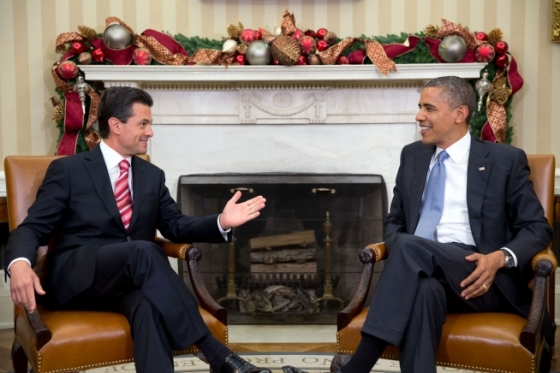 WASHINGTON, Nov 28 2012 (IPS) - Ahead even of his Saturday swearing in, Mexican President-elect Enrique Pena Nieto met here on Tuesday with President Barack Obama to lay out a vision for a new bilateral relationship based more on economics and less on security issues.

Speaking with President Obama, Pena Nieto noted that the two leaders share a “very important vision … of creating more jobs”. The president-elect, who won his seat in July, also noted that a modernising Mexico has “the opportunity to grow … (and) to integrate North America, to be participating in this part of the world.”

Indeed, ahead of his six-year term, Pena Nieto is laying the groundwork to turn global attention away from the image of his country as crime- and drug-infested, and instead to focus on Mexico’s four-percent growth rate, one of the strongest in the region and well above the global average, including that of the United States.

Ahead of closed-door discussions, President Obama conceded the new dynamic.

“I know the president-elect is also interested in … a discussion about both regional and global issues,” Obama said, “because Mexico has become not simply an important bilateral partner, but is today a very important multilateral, multinational leader … not only on regional issues, but also on global issues.”

There is much to support greater economic ties between the two countries, which already sustain trade worth a half-trillion dollars a year. According to a new policy brief from the Mexico Institute at the Woodrow Wilson International Center for Scholars, a nonpartisan Washington think tank, Mexico is the second largest market for U.S. exports.

“There’s a reason for putting the economic issue back in the spotlight, and it has to do with making tangible progress on issues of importance – jobs, exports – in both countries,” Christopher Wilson, a co-author of the Mexico Institute brief, told IPS.

“That’s not leaving aside immigration or security, which will stay important pieces. But the president-elect is clearly trying to change the narrative to one of more complexity – beyond the image of drugs and illegal immigration.”

Further, Wilson suggests, “Changing the tone of the relationship, focusing on opportunities rather than challenges, could also facilitate progress on other sticky issues, including security and immigration.”

“Few countries will shape (the United States’) future as much as Mexico,” the brief suggests, noting that the bilateral relationship has already started to change.

For one, there now seems to be a crystallising understanding by officials on both sides of the border that the U.S.-funded “war on drugs” has been a failure. Pena Nieto ran on a campaign of repudiating the costly and incredibly bloody anti-drugs assault launched by his predecessor, Felipe Calderon, which resulted in the deaths of some 60,000 to 100,000 Mexicans.

The president-elect stated instead that he would focus on working to reduce the violence that has wracked Mexican society over the past half-dozen years. He has said he would refocus funding on the police over the military and reorganise the decentralised security forces back under the Interior Ministry.

Further, the surprise vote in early November in two U.S. states to legalise the recreational use of marijuana has already led Mexican officials to publicly agitate for a policy overhaul. Immediately after the U.S. election, a top Pena Nieto advisor stated that the vote “changes the rules of the game in the relationship with the United States”.

Some suggest that the United States itself could offer a model for a more balanced drugs approach in Mexico.

“There are more drugs in the United States than in Mexico, more guns than in Mexico and more money in the drug trade than in Mexico – but we don’t have the violence that is in Mexico,” Shannon K. O’Neil, a senior fellow with the Center for Foreign Relations, a centrist Washington think tank, told reporters Wednesday.

“There is a lesson here: the U.S. has been able to create a containment policy that has kept the drug trade from getting violent,” a policy that is in stark contrast to the Calderon approach that Washington has for years applauded.

Second, illegal immigration from Mexico into the United States is currently said to be at its lowest levels in 40 years. Currently, an estimated 32.5 million Mexicans live in the United States.

On Tuesday, Pena Nieto strongly endorsed President Obama’s vision of immigration reform, which will likely be a major domestic priority in Washington next year. Again, such a policy would be a major turnaround from the Calderon years.

Race to the bottom?

Still, as he starts his term, Pena Nieto will be facing significant obstacles to any reforms process. Chief among these is that, despite running as a quasi-reformer, he is still a member of the Institutional Revolution Party (PRI), the at times autocratic political grouping that ruled Mexico for more than seven decades.

How the old guard reacts to, and is taken along with, Pena Nieto’s attempts at modernisation remains to be seen. He also won a three-way race with less than 38 percent of the vote, far from the mandate that some had initially been expecting.

But the Mexico Institute’s Wilson says that certain key players – such as the military – could be quietly looking for an opportunity for reform.

“Because of the war on drugs, the Mexican military has taken on a much more visible and active role, and they would like to have a clear legal framework for what that role should look like,” he says. “It’s not clear exactly how the incoming administration will push this, but it is clear that the military would like to have greater legal certainty and to continue to professionalise.”

Further, for all of the talk of Mexico’s booming economy, its four-percent growth rate is really only middling, and many are warning against overselling its long-term strength. Not only will it be very difficult for Mexico to become a new manufacturing hub like China, for instance, but trying to do so would bring along its own set of problems.

“At some point, wages in Mexico can become more competitive with China, but that’s not necessarily a good thing for Mexico – that’s a race to the bottom,” Jorge G. Castaneda, a former Mexican foreign minister now with New York University, told reporters Wednesday.

“You can’t hope to reduce wage differentials, reduce immigration to the U.S., and say you want to increase wages by trying to be competitive with China. You have to choose.”