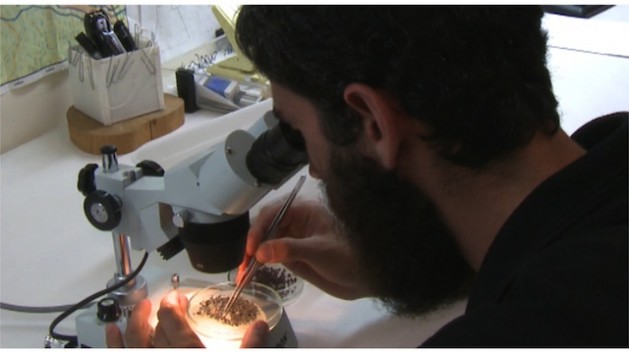 ACRE, Northern Israel, Dec 9 2012 (IPS) - While Israelis aren’t new to the diamond trade, they’re fairly novice in diamond mining. Inspired by the words of a revered Rabbi who prophesied that gems are buried in the Promised Land, Shefa Yamim, the country’s first exploration and mining company, hopes to unearth huge diamonds deposits.

Somewhere along the tributaries of the Kishon River which nourish the Carmel Heights, unperturbed by the fallouts of Israel’s recent military operation on the Hamas Islamist movement in Gaza some 170 kilometres south, an intriguing quest is taking place after diamond deposits, at the exact location where science and faith could finally meet.

For the past decade, the exploration and mining company has been rummaging through the land, hoping to confirm a prophecy made some 9,000 kilometres away and over two decades ago by a rabbi revered by his followers as being the Messiah.

In 1988 in Brooklyn in New York, the late Lubavitcher Rebbe Menachem Mendel Schneerson mentioned in passing to then mayor of Haifa that gems are divinely buried in the valleys and streams around the city. “The Holy One, Blessed Be He, did a wondrous thing; he concealed them in the depths of the earth…”

“He is Moses. He shall reveal himself and lead us to a much better world,” confides Abraham Taub, Shefa Yamim’s CEO, who knew Schneerson well.

Inspired by the Rebbe’s call, Taub followed it faithfully like a decree. He founded Shefa Yamim (‘The Abundance of the Seas’) in 1999 with a mission in mind – to fulfil the Lubavitcher’s revelation and “explore and locate the hidden treasure buried in the valley.”

And a “wondrous thing” did indeed occur. The area, it seems, sits on a gold mine – a diamond mine, actually. “All the associate minerals usually found near diamond mines are here,” says Taub.

In the area designated by the Rebbe, Taub and his team of prospectors found kimberlites, the strongest mineral indicator that the Promised Land of “milk and honey” might also bear promise of being a land of diamonds and gems.

The kimberlite is the source rock, ‘the mother’. Diamonds are formed in the womb of the earth at a depth of 200 kilometres as a result of extreme magmatic heat and pressure.

During volcanic eruptions, kimberlite rocks are expelled to the surface through vertical conduits known as kimberlite pipes, though only one percent of them are diamond-bearing.

Alluvial digs here unearthed not only hundreds of precious stones – ruby, sapphire, garnet –, but also 77 micro-diamonds, including a 0.8-carat pure natural white diamond, as well as an extremely rare and priceless moissanite – the closest mineral to diamond in hardness and brightness.

From prospection to extraction at more than 30 locations; from drilling and digging to loading, unloading and sieving; from scrabbling and washing, to washing and sieving; drying and sieving again, then washing again – finding a diamond is like looking for a needle in a haystack.

Or, in a “chocolate cake”, a dense cake-shaped composite of dark brown heavy mineral, the end product of the long process of triage where the hope is “to find the cherry on top of the cake,” says Toledano. “Every grain is checked thoroughly under a microscope at our lab.”

Africa’s diamond mines were the killing fields of the 20th century. A set of international rules and regulations initiated jointly by governments, industry and civil society and known as the Kimberley Process Certification Scheme now prohibits the trade of “conflict diamonds”.

A world-renowned leader for cutting, polishing and trading diamonds, Israel became chair of the Kimberley Process in 2010.

About that time, Shefa Yamim began to consider trading on the Tel Aviv stock exchange.

Consider that no major diamond mine has been discovered in 15 years – diamonds are running out. Take into account the prosperity-driven demand for diamonds in Asian countries such as China and India, and speculation is rife.

Could it be that Israel is on the brink of finding significant deposits of rough diamonds and thus be squaring the full diamond circle? “Either in 24 hours or in 2,400 hours, we’re very close to find diamonds. If this will be the case, and we hope it will be, Israeli diamonds will considerably alter the global market,” Heiblom predicts.

Shefa Yamim’s consultant geo-chemist, Dr. Mark Fedikow from Mount Morgan Resources in Winnipeg, Canada, believes in a “20 to 30 percent probability” that “in three to five years” the company could reach production on a major scale.

Yet, Shefa Yamim will need substantial injection of capital beyond the 15 million dollars initially invested if it wants to drill deeper and unearth bigger diamonds. That’s precisely the aspiration. Shefa Yamim’s motto to encourage potential shareholders is “Faith shakes hand with science.”

Faith in what a rabbi predicted may have indeed met science. Yet at this stage, what’s in need is ever-greater faith – if only to confirm what science now predicts.