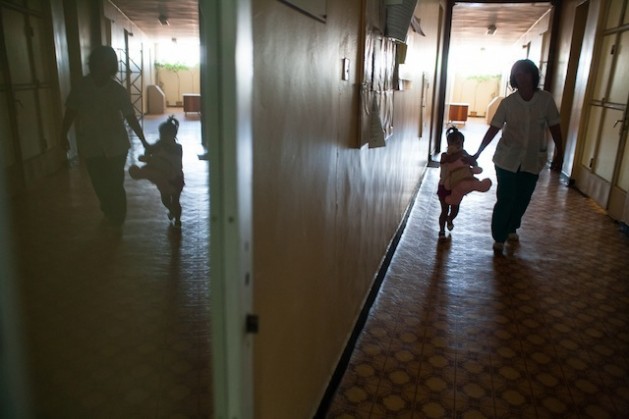 An orphanage in Ruse in Bulgaria that the government wants to close down next year. Credit: Hope And Homes for Children.

SOFIA, Bulgaria, Dec 2 2012 (IPS) - Governments in Eastern Europe and Central Asia are being urged to end the institutionalisation of babies as more than 15,000 children a year in the region continue to be subjected to a practice experts say often leaves them physically and mentally scarred for life.

At a UNICEF conference in the Bulgarian capital Sofia last week, representatives from 20 governments across the region heard that every hour on average two young children, mostly babies, are separated from their parents and sent into institutional care.

And, despite concrete reforms in some states, and with institutionalisation on the rise in more than half the countries in the region, more work needs to be done to ensure childcare across the entire region is radically overhauled, UNICEF and other groups say.

Jean Claude Legrand, regional advisor on child protection at the UNICEF regional office for Central and Eastern Europe and CIS (Commonwealth of Independent States), told IPS: “Childcare in the region needs to be de-institutionalised and there needs to be a change of attitude towards what can be best done for children.”

A relic of communism, child institutionalisation remains common across the former Eastern bloc.

A report presented at the conference in Sofia showed that more than a million children in the region are separated from their families and more than 600,000, including at least 31,000 aged three or under, are in state-run facilities.

Eastern Europe and Central Asia has the highest rate of institutionalisation in the world.

Many families who feel they cannot support a child, often for financial reasons, turn them over to state-run orphanages. Support services for parents considering abandoning children are often weak, and in some cases non-existent.

This leaves some feeling that they have no choice but to abandon their child to an institution, especially if the child is disabled.

But while orphanages across the region do provide basic care, campaigners for de-institutionalisation point to studies showing that putting children in institutions, especially when very young, can result in severe developmental problems.

Among these are brain and other physical growth deficiencies, cognitive problems and delays in the development of speech and language skills believed to be caused by a lack of stimulus and affection in institutions.

This, however, is not universally acknowledged or even known about in some parts of the region, and many people working in or in charge of childcare continue to see institutionalisation as a benefit for some children.

Beth Maughan of UK-based charity Hope and Homes for Children which works in Eastern Europe helping governments deinstitutionalise childcare, told IPS: “Among people working at or running, institutions, there is often a lack of information on the effects that institutionalisation has on children under three.”

Other studies have also shown that it costs as much as six times more to house a child in an institution as to provide social services to vulnerable families, is three times more expensive than professional foster care and twice as expensive as placing them in a small family home.

Often state services are not linked, and different stages of childcare responsibility can fall under different ministries, leading to a lack of a uniform strategy for any childcare reform.

Such reform is also often low priority for governments.

Attitudes have proved slow to change. The belief that it is better to grow up in an orphanage than in a poverty-stricken family – thinking which has been prevalent since communist times – remains deeply entrenched in some communities. In some cases, parents who were themselves institutionalised see it as the best option for children of their own.

Ignorance among those involved in childcare and social stigma also means that children with disabilities, ethnic minorities and infants born to HIV positive women are at high risk of being institutionalised. It is not uncommon for mothers to be actively encouraged to give up their babies at birth.

The subsequent predominance of institutionalisation and prevailing attitudes have suppressed the development of alternative care options for abandoned children, such as foster care and small home facilities, as well as support networks to prevent abandonment in the first place.

This, those working in the field say, has only encouraged more child institutionalisation.

Maughan told IPS: “The fact that institutions exist encourages them to be used. In a borderline case where there might be some concern over a child, decisions may be made to simply put them in an institution rather than making a lot of effort to analyse whether this is actually necessary.

“We know from our own experience this happens. But if there is no institution, more is likely to be done to determine whether a child should be left with its family.”

However, despite the apparently considerable barriers to deinstitutionalisation, campaigners remain optimistic that the placement of under-threes in orphanages in the region can be stopped before the end of the decade.

Some countries have recently made significant advances in reforming their childcare systems. Romania, Serbia and Croatia have introduced legislation to ban the placing of children under the age of three in institutions while Bulgaria has already started closing down some of its orphanages.

Other countries have also pledged to take concrete steps to reform their childcare systems and move towards ending institutionalisation of infants.

“Some countries have made incredible progress on de-institutionalisation in recent years,” UNICEF’s Legrand told IPS.

“What we want to see, by 2020, is laws, mechanisms and services in place for ensuring that all children below three years can live in a family environment.

“Hopefully, getting results on (deinstitutionalisation) of children below the age of three will gradually close the flow (of children into orphanages) and stop as many children being put in institutions as there are today.” (ends)