Jan 17 2013 (IPS) - Any comparison of energy output from renewables to conventional energy sources must necessarily fail at the start. Renewables are new, they are a beginning, and it’s still too early to weigh such figures and to discount renewables.But despite significant advances in Abu Dhabi and Morocco, and promising commitments by the Saudis, the Middle East and North Africa (MENA) region was reminded it is still doing less than many others.

“The total installed capacity (in the MENA region) is less than 1 gigawatt (GW), excluding hydro,” Tareq Emtairah, executive director of the Regional Centre for Renewable Energies and Energy Efficiency in Egypt, told a meeting. 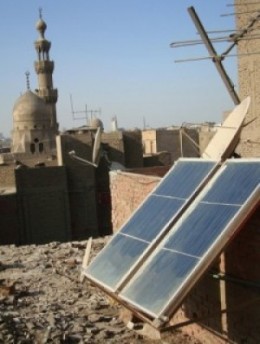 Renewable energy sources are still too early in their development to write them off based on capacity comparisons to fossil fuels. Credit: Cam McGrath/IPS

The meeting was billed “MENA, A Rising Star in Renewable Energy Investment”.

“Between 2002 and 2011 less than six billion dollars was invested,” he said. “Italy alone did that much in 2011.” In the larger pattern, he said, “of 22 Arab countries, 16 have indicative targets. But we do not see stability in commitment to renewable energy.”

Emtairah said the pricing and tariff structure was not conducive to deployment of renewable energy. The need to address low-income end users is understandable, he said, but subsidies for conventional electricity in MENA countries were already costing 50 billion dollars annually.

“The ingredients are there but they have not been put together,” said Marc Fevre, Partner, Baker & Mckenzie firm in UK. However, putting them into place is still possible given new commitments, he said.

A major commitment has come from Saudi Arabia. “We are happy to see Saudi committing to 54 GB capacity by 2035, which would be substantive,” said Stefan Singer, director of the Global Energy Policy at WWF International. “It’s a very strategic move for whatever reasons.”

But setting targets is one issue, he said. Putting them into a national participatory context is another. “We hope MENA becomes a rising star at some point in time.”

Apart from investment, many countries in the region have not considered grid connections, he said. “Grid connections are not boring connections between power stations,” he said. “They are critical to bringing the fruits of renewables to people.” And they are fundamental to energy planning.

But that brings up the comparative issue again. Why compare to conventional energy sources? Compare to the zero, some say, where renewables were not long back.

“Ten years ago, Masdar (the Abu Dhabi  company leading investment in renewable energy) did not exist,” said Yousif Al Ali, director of the Shams solar project in Abu Dhabi, the biggest in the region. “The science park in Qatar was not there. And many others. But today I am optimistic and excited. I believe we will be a rising star. We have put the foundation to be a rising star.”