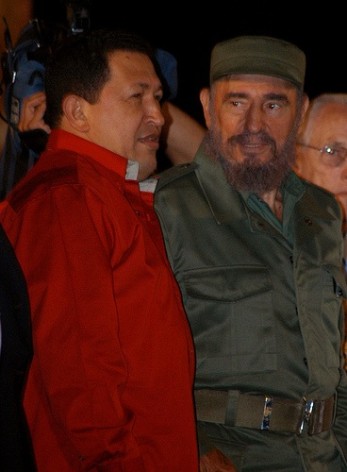 Chávez and Castro in Havana's Revolution Square in February 2006, when Chávez was presented with the UNESCO José Martí Award. Credit: Jorge Luis Baños/IPS

HAVANA, Mar 7 2013 (IPS) - Hugo Chávez of Venezuela was the president who made the most visits to Cuba, where flags are flying at half-mast in official mourning for his death Tuesday Mar. 5, and where his friend and political mentor, Fidel Castro, survives him.

The extremely close economic ties between the two countries arose from a comprehensive agreement signed Oct. 30, 2000, which gave Cuba access to the benefits of the Caracas Energy Cooperation Agreement for supplying oil and fuel on preferential terms also enjoyed by other countries in the Caribbean region.

Together with concerns over the possible economic repercussions of Chávez’s death in this Caribbean island nation, there was anxiety in some quarters over Castro’s health. “How sad, I wonder how Fidel is taking it,” said one woman buying the state newspaper Granma, which on Wednesday devoted six of its eight pages to Chávez.

“The first reaction, certainly, is the feeling of grief over the loss of a great Latin American leader and one of Cuba’s best friends in Venezuela,” essayist and researcher Carlos Alzugaray told IPS. “Personal, political and social” links between Cubans and Venezuelans “date from a long time ago,” he added.

Chávez promoted new kinds of participative processes, and “in spite of the aggressiveness that characterises Venezuela’s bourgeoisie, his attitude was always one of dialogue and he strengthened democracy in his country,” said Reina Fleitas, a university professor.

Based on the wishes of both governments to establish, sustain, develop and expand cooperation for their mutual benefit, making the most of the potential and comparative advantages of each country, a new style of political relations was established in the region, some analysts say.

Others hold the view that the Chávez government merely became a substitute for the aid from Moscow that was the backbone of the Cuban economy until the dissolution of the Soviet Union in 1991, the worst effect of which was, precisely, the loss of oil supplies.
Venezuela is at present a key pillar of the Cuban economy, which receives between 90,000 and 100,000 barrels per day of crude from the South American country.

In exchange for this strategic supply, some 50,000 Cuban experts in education, health, sports and other fields, such as communications, intelligence and the military, are living and working in Venezuela.

Venezuela has thus become Cuba’s main trading partner, and trade has grown to more than three billion dollars a year.

Furthermore, around a hundred cooperation projects in different sectors of the economy are worth over 1.3 billion dollars, according to 2011 figures.

Given the importance of these ties, some segments of the Cuban population may be anxious about the possible economic consequences of Chávez’s death, Alzugaray said.

However, “it is highly probable that the continuers of Chavez’s policies will remain in government in Venezuela, since under his leadership there were strong demands and progressive, popular, left-wing political forces that have combined to form a powerful mass movement,” he said.

People should also understand that economic relations have become increasingly institutionalised and are beneficial to both countries, he said.

“I don’t think the opposition in Venezuela will be able to seize the leadership from Chávez’s followers in the short term, nor that they will be so irresponsible as to destroy Cuban-Venezuelan relations in the unlikely event that they do take power, which is only a possibility in the medium to long term but not in the immediate future,” he said.

Cuban journalist Boris Caro, who lives in Canada, said the impact of Chávez’s death would depend on the result of the forthcoming Venezuelan elections, which must be called within 30 days.

“If Nicolás Maduro – the interim president and Chávez’s anointed successor – defeats (opposition presidential candidate Henrique) Capriles, there will be no major changes to the rate of economic reforms on the island,” he wrote on the interactive section Café 108 on the IPS Cuba web site.

But an electoral victory for the opposition would bring the Cuban government to the verge of another energy crisis, he said. “Without the 90,000 barrels of oil per day subsidised by Caracas, the island’s economy would fall into even deeper recession,” he said.

Caro agreed with other sources in hoping that the Cuban authorities had a “Plan B”, since they were well aware that Chávez was expected to die. “They have had two years in which to prepare. Hopefully this new situation has not taken them by surprise,” he said.

Castro and Chávez met in Havana on Dec. 14, 1994, when Chávez, then leader of the Revolutionary Bolivarian Movement-200, visited the Cuban capital at the invitation of Eusebio Leal, the Havana City historian. He was met and embraced at the airport by then President Fidel Castro.

Eight months earlier, the young paratrooper lieutenant-colonel had been freed after serving two years in prison for leading a failed attempted coup against president Carlos Andrés Pérez (1974-1979 and 1989-1993), who restored diplomatic relations with Cuba in 1974 after they were broken off by Rómulo Betancourt in 1960.

The idea had been to make a discreet exploratory visit, but Castro took the reins and treated Chávez as a head of state. About the same time, Venezuelan president Rafael Caldera was publicly receiving Jorge Más Canosa, the rabidly anti-Castro head of the Cuban American National Foundation.

Eighteen years after their first meeting, Castro described his first conversations with Chávez as lasting for hours. “I was far from imagining that those soldiers branded as coup plotters by the news agencies, who sowed their ideas with so much discretion for years, were a select group of Bolivarian revolutionaries,” he wrote in a letter to Maduro.

Between 2006 and 2011, when word of Chávez’s ailment was made public, the Venezuelan president made a score of private, working and official visits to Cuba, which became opportunities for improvised discussions of bilateral, regional and international issues.

On one of those trips, in 2007, Chávez declared that “deep down, we are one government,” and that the two countries were advancing towards a “confederation of Bolivarian (after South American independence hero Simón Bolívar), Martían (after Cuba’s national hero José Martí), Caribbean and South American republics.”

Chávez chose to be treated in Cuba for the cancerous tumour that he announced had been diagnosed in June 2011 at the CIMEQ Hospital in Havana, where he underwent his fourth operation on Dec. 11, 2012.

During the convalescence of Castro, who became seriously ill in 2006, Chávez officiated as his international spokesman. And Castro, in turn, was attentive to the health of his Venezuelan guest right to the end. Two days of official mourning and a day of national mourning have been declared in Cuba from Wednesday to Friday.