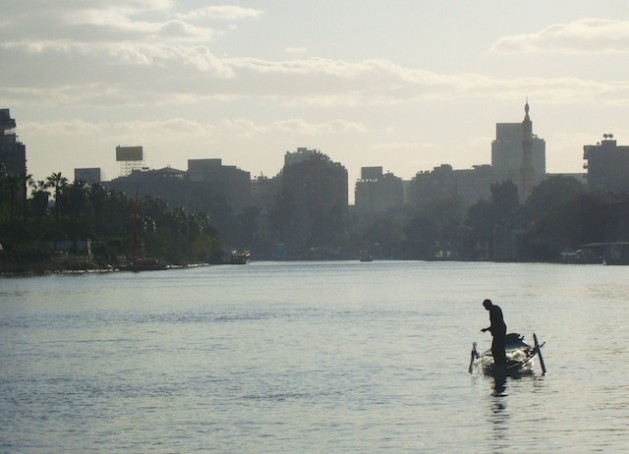 CAIRO, Mar 29 2013 (IPS) - A 4,200-year-old relief in the Tomb of Mereruka in Sakkara depicts the staggering array of fish that once inhabited the Nile River and its wetlands. Ancient Egyptian fishermen with linen nets haul in their bounty, including the sacred Oxyrhynchus, a snub-nosed fish that was captured and nurtured but never eaten.

Anecdotes from the fishermen who inhabit the banks of the Nile today paint a different picture. Ibrahim Abdallah, a Nubian village elder, says many of the fish he remembers from his childhood have disappeared entirely from the river.

“Many varieties of fish are gone and the few that remain have been overfished,” he says.

Abdallah recalls a pan-sized fish he calls “kawara” that once gathered every summer in the Nile’s back eddies and deep pools on their way to spawn.

“We haven’t seen them for many years,” he says. “One summer we found they had all disappeared.”

Almost half of the Nile fish depicted in ancient reliefs are now extinct from Egyptian waters. Researchers comparing historic fish collection records estimate that as many as 35 of these fish species, including the elephant fish, Nile jewel cichlid, and African bony tongue, disappeared from the lower reaches of the Nile in the last 40 years. Dozens more are listed as threatened or endangered.

Justin Grubich, assistant professor of biology at the American University in Cairo, says Nile river fisheries suffered a catastrophic decline following the construction of the Aswan High Dam in the 1960s. The dam acts as a barrier, impeding the reproductive cycle and migratory routes of many fish species, and preventing millions of tonnes of silt and organic matter from reaching the lower Nile.

“The High Dam was built to control the flood season so as to have more consistent agriculture,” Grubich explains. “The dam helps regulate water better, but downstream there is no replenishment of soil and nutrients (to support aquatic life).”

The impact is felt over 1,200 kilometres downstream. Without sedimentation, the Nile delta is receding, in some areas by several metres a year.

The coastal erosion has allowed the sea to advance into a series of shallow lakes at the mouth of the Nile, killing freshwater species unable to tolerate the higher salinity. It has also allowed predatory marine fish to invade spawning and nursery areas, devastating fish stocks.

Research conducted in the 1970s found that aquatic biodiversity in the four Nile-fed Delta lakes in Egypt had decreased significantly. Surveys by the National Institute of Oceanography and Fisheries (NIOF) identified 34 species of fish in Lake Manzala, compared to more than 50 recorded half a century earlier. Similar patterns were found in nearby Lake Burullus, which had become exceedingly brackish.

And polluted. Over 4.5 million tonnes of industrial effluent, including 50,000 tonnes of hazardous contaminants, is poured into the lower Nile each year, according to the environment ministry. The pollution, which also includes agricultural runoff and untreated sewage, poisons aquatic life in the river and concentrates in the lakes at its mouth.

Juvenile fish are extremely susceptible to pollution, which can kill them directly, “or create a large volume of decaying organic matter that uses up all the dissolved oxygen that fish need to survive,” says Osman El-Rayis, professor of chemistry at Alexandria University.

Lethal levels of water toxins may have already extirpated the jewelfish, which once flourished in the Nile delta and northern lakes. Fishermen say the plump, bottom-scouring moon fish is now rarely seen in the river. And the once ubiquitous Nile minnow, which moved in large schools in the shallows, is now restricted to a few locations near Aswan.

In Lake Nasser, the 5,200 square kilometre reservoir behind the High Dam, populations of many fish species have declined to critical levels, warns Olfat Anwar, fisheries director at the Lake Nasser Development Authority.

“The main reason is the change in environment, because there is almost no nutrient flow within Lake Nasser,” she says. “The current ranges from zero to 0.3 metres per second from Sudan until Abu Simbel, then is almost stagnant (further north). So there is no flow from the south to the north, and this affected the species composition of the lake.”

The lake has also suffered from decades of neglect and mismanagement that resulted in unsustainable fishing practices, cruise boat pollution, and an underfunded hatchery programme.

Yet a few species of fish have not only survived, they have thrived. Four species of tilapia inhabit the lake and support a healthy commercial fishery. Catfish, Nile perch and tiger fish grow to monstrous size, attracting anglers from around the world.

“The apparent success of a handful of species has distracted people from the plight of others, such as fahaka (Nile pufferfish) and binny (barbel), which are suffering,” Anwar tells IPS. “Because they are not commercial fish, saving them is deemed a low priority.”

But conservation action is desperately needed, says AUC’s Grubich. Freshwater bodies are particularly sensitive to ecological changes, and the loss of a seemingly insignificant species can collapse complex food chains.

“All of these species together have been evolving for millions of years and have developed a food web,” Grubich explains. “It’s a delicate balance, and when you take out one of the players… it tends to have a cascading effect.” [END]