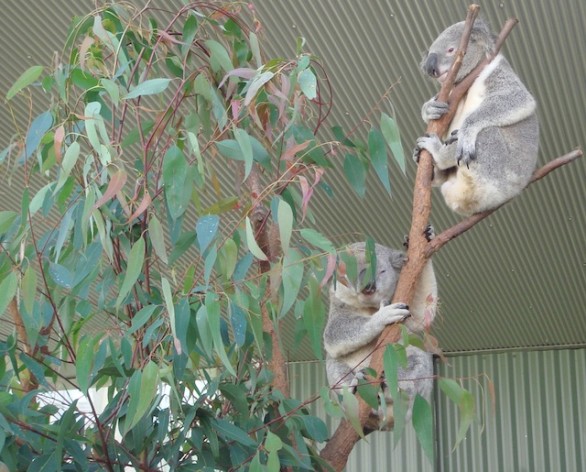 SYDNEY, Apr 30 2013 (IPS) - Australia’s iconic marsupial is under threat. Formerly hunted almost to extinction for their woolly coats, koalas are now struggling to survive as habitat destruction caused by droughts and bushfires, land clearing for agriculture and logging, and mining and urban development conspire against this cuddly creature.

In the past 20 years, the koala population has significantly declined, dropping by 40 percent in the state of Queensland and by a third in New South Wales (NSW). The Australian Koala Foundation (AKF) estimates that there are between 45,000 and 90,000 koalas left in the wild.

Shrinking habitat and climate change is compounding the risk of disease, while attacks from feral and domestic dogs and road accidents add to a long list of risks that this arboreal mammal faces as it moves across the landscape in search of food.

It is estimated that around 4,000 koalas are killed each year by dogs and cars alone.

Climate scientists warn that forecasts of longer dry periods, rises in temperature, more intense bushfires and severe droughts pose a significant risk to the koala, which is endemic only to Australia.

“In the past decade, we have experienced the hottest temperatures on record followed by floods and cyclones. The koalas are highly susceptible to heat stress and dehydration,” University of Queensland koala expert Dr. Clive McAlpine told IPS.

“Our climate envelope modelling found that koalas occur at a maximum temperature of 37.7 degrees centigrade. Across western Queensland and New South Wales, temperatures remained in the mid to high 40-degree centigrade (range) for consecutive days, pushing them beyond their climatic threshold.”

The name koala is derived from the aboriginal word meaning “no drink”, as the creatures feed on and derive much of their moisture needs from the nutrient-poor eucalyptus leaves. An individual Koala may have to consume 500 grammes of leaves or more each day in order to grow and survive.

“Climate-induced changes will not only reduce their food resource, but also the nutritional quality and moisture content of leaves. Most recently an 80 percent decline was documented in Queensland’s Mulga Lands following the 10-year drought,” McAlpine told IPS.

According to the AKF, protecting the existing koala eucalypt forests is also an imperative step towards reducing greenhouse emissions in Australia. Since 1788, nearly 65 percent (116 million hectares) of the koala forests have been cleared and the remaining 35 percent (41 million hectares) remains under threat from land clearing for agriculture, urban development and unsustainable forestry.

As koalas and humans vie for space amidst growing urban and infrastructure development on Australia’s eastern seaboard, koalas have been venturing out of their confined eucalyptus forest habitat, often crossing major roads in search of trees or mates.

“Koalas’ continuous move into urban areas makes them highly vulnerable to road (accidents) and attacks by dogs. In the rapidly developing region of southeast Queensland, the species has suffered a 60 percent decline in the past decade due to the combination of disease, dog attacks, but mostly collisions with cars,” Darryl Jones, deputy director of the Environmental Futures Centre at the Queensland-based Griffith University, told IPS.

Jones, who is the lead author of a recent study aimed at assisting the safe movement of koalas, said, “When forced out of their natural habitat, koalas use all resources available to them including backyard trees, tree-lined road verges and median strips. Retention of these marginal habitats in urban areas is important for koala movement and dispersal.”

Australia’s Wildlife Information, Rescue and Education Service (WIRES) recently rescued a confused sub-adult male koala from the middle of a felled pine forest in NSW. He was sitting on top of a woodchip pile, with trucks and machinery operating close by.

WIRES General Manager Leanne Taylor said, “If koalas are moved out of their homes in preparation for planned logging activities, it is common for them to roam back to their home range afterwards and become confused to find nothing there.”

Koala advocacy groups say the government is putting mining interests above the environment. According to a spokesperson for the Wilderness Society, “Koala habitat is facing additional threat from expanding coal mining and coal seam gas operations, tree kills from coal seam gas spills, and increased infrastructural and vehicular traffic that comes with mining development. It is putting extra strain on the already declining koala populations in New South Wales and Queensland.”

The Australian Government last year listed the koala as “vulnerable” under the Environment Protection and Biodiversity Conservation Act of 1999 on the recommendation of the Threatened Species Scientific Committee.

“It has taken 17 years of campaigning to get this listing and conservation groups like ours believe that in some regions the species requires a ‘critically endangered’ listing,” David Burgess, natural areas campaigner at the Total Environment Centre in Sydney, told IPS.

Deborah Tabart, CEO of the AKF, told IPS, “The protection does not go far enough and the Federal Government has underestimated the danger koalas face. We urgently need a Koala Protection Act.”

The International Union for Conservation of Nature (IUCN) lists the koala as “potentially vulnerable”. In 2000, the U.S. Fish and Wildlife Service listed the koala as “threatened” under the United States Endangered Species Act.

Two other deadly threats to the koalas’ survival are chlamydia, a sexually transmitted disease, and the koala retrovirus (KoRV), an HIV-like virus. According to some estimates, around half of all Australia’s koalas are infected with a strain of chlamydia, which causes infertility, blindness, respiratory and urinary infections and death.

Chlamydia affects male and female koalas, and even joeys who pick up the infection while suckling from their mother in the pouch. In some parts of Australia, koala infection rates are as high as 90 percent.

With a life span of between 10 and 14 years, koalas are slow breeders and usually produce one joey a year.

A joint team of researchers from the Australian Museum and the Queensland University of Technology have recently sequenced the koala interferon gamma (IFN-g) gene, a discovery that they call the “holy grail” for understanding the koala immune system. They are currently trialling a vaccine to protect koalas from chlamydia.

The government has formulated a National Koala Conservation and Management Strategy 2009 – 2014. But conservation groups say the major threat to the koala is inaction, lack of resources and willpower from both national and state governments.

Burgess warns, “Unless meaningful action is taken to protect the koala habitat, it may get to the point where the species relies on expensive captive breeding programmes for its survival.”