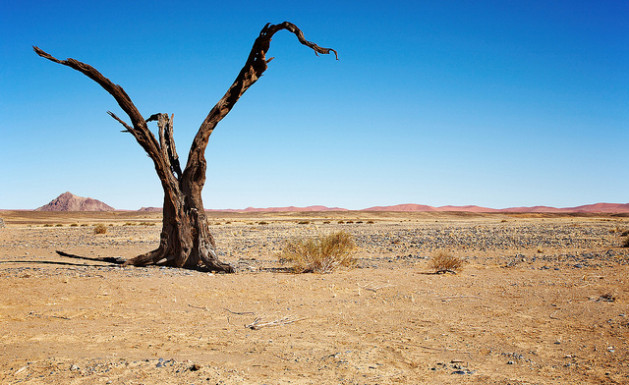 ROME, Jun 19 2013 (IPS) - The Middle East and North Africa is the region most affected by water scarcity in the world, and for the moment, the situation seems set to worsen.

“In Yemen, we do not have many sources of fresh water and rain water is certainly not enough for our needs,” Gunid Ali Abdullah, planning director at Yemen’s Ministry of Agriculture, tells TerraViva in Rome. “We are all the time having to dig deeper and deeper to get water from aquifers.”

"The potential of the region is not being met." -- FAO's Mohamed Bazza

In Yemen’s capital Sana’a, tap water is rationed, and farmers close to the city have deepened their wells by tens of metres over the past decade but are nevertheless extracting less water than before.

Countries in the region are already tapping non-replenishable water resources, or fossil aquifers.

“At the end of this year, we should be able to start using water coming from the Al-Disi Basin, at the border with Saudi Arabia, which we hope will come a long way in meeting the needs of our capital, Amman, which hosts 3.5 million people, almost half of our total population,” Feisal Alargan, deputy permanent representative of Jordan to FAO, tells TerraViva.

The Al-Disi aquifer is thought to be about 320 kilometres long, the largest of its type in the Arabian peninsula. It has already been exploited by Saudi Arabia, and its resources are thought to be non-renewable.

Jordan is ranked third in the world when it comes to water scarcity, relying mostly on rain and underground water as well as on a supply quota of the river Jordan agreed with Israel.

In such conditions, figuring out how to use non-replenishable water resources, despite the unsustainability of the solution and despite some doubts over the quality of the water, seems like a miraculous way out for Jordanian leaders and others in the region.

Yet such approaches resemble a race to the bottom: a NASA report published in March this year showed that, between 2003 and 2009, the Middle East lost a quantity of water equivalent to the volume of the Dead Sea.

And things might get worse: the World Bank predicts that water demand in the region is expected to grow by 60 percent by 2045.

The region’s water problems are caused by a natural lack of water resources combined, according to experts, with poor management of the existing resources at both the national level and regionally.

The lack of intra-regional cooperation is most noticeable when it comes to sharing water from transboundary rivers: outdated accords make it so that Egypt uses most of the Nile’s potential; Turkey, upstream from other countries on the course of the Euphrates and the Tigris, is sucking up most valuable resources via its intensive use of dams; the use of river Jordan remains an issue of controversy between Israel and neighbouring Arab countries.

Governments in the region are of course struggling to find solutions to the problem of water scarcity.

“We’re working on the construction of small dams in the highlands in order to harvest water,” explains Yemen’s Gunid Ali Abdullah. “We’re also trying to modernise irrigation methods in order to use less water for agriculture, which currently takes up about 90 percent of our precious water resources.”

But the challenges are high and cooperation is key to overcoming water scarcity in the region.

International organisations have been trying to tackle water issues in the region in the past with technical assistance programmes and grants, with limited success.

This year, the U.N. FAO is attempting to change the approach to the issue: throughout 2013, it is conducting a thorough assessment of water resources and use in the whole region, trying both to treat the region as a whole and to pay close attention to the multiple interactions between water and all other aspects of human life.

“The Near East region has to meet half of its food needs via imports because of lack of water to produce enough food itself,” explains Mohamed Bazza, FAO’s focal point for national drought policies.

Bazza stresses that the central role of water for achieving food security makes water scarcity issues crucial for FAO, which explains why water scarcity features among the five new strategic objectives to be pursued by the institution.

“Numerous efforts have been made in the past to improve food security in the region on different aspects, including water use, but something has not been working, meaning that the potential of the region is not being met,” Bazza says.

FAO’s comprehensive assessment will this year look for the reasons behind the region’s water crisis, as well as try to identify what should be priority areas of action to address these problems.

Solutions not emphasised much until now could become more prominent: for instance, shifting  agricultural production towards less water-intensive crops or even reducing food waste on the fields as wasted crops also mean wasted water.