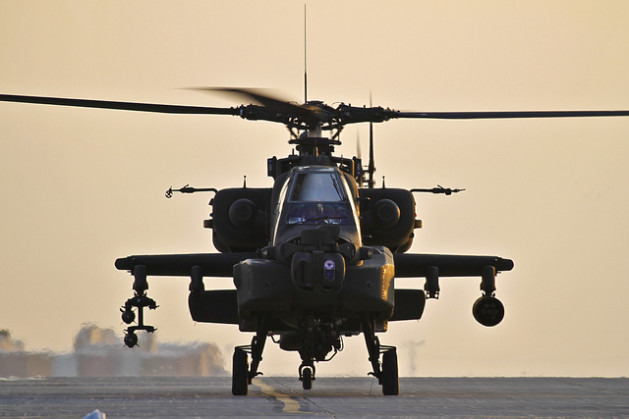 The United States plans to sell eight Apache attack helicopters to Indonesia, but rights groups fear they could be used to oppress civilians. Credit: The U.S. Army/CC by 2.0

WASHINGTON, Aug 26 2013 (IPS) - U.S. Secretary of Defence Chuck Hagel announced Monday that Washington is going forward with a controversial sale of eight attack helicopters to the Indonesian government, despite concerns that the gunships will be used for internal repression.

The deal, worth some 500 million dollars, would be the largest-ever military sale between the two countries. In addition to the eight Apache AH-64E helicopters – the latest of this type of aircraft, built by U.S.-based Boeing – the agreement would include pilot training and radar technologies.

“Providing Indonesia these world-class helicopters is an example of our commitment to help build Indonesia’s military capability,” Hagel said in Jakarta, where he is on an eight-day trip to Southeast Asia.

"Given the history of the Indonesian military [the Apaches] are more likely to be used for internal repression than for external defence." -- John Miller
A U.S. defence official, speaking anonymously, told reporters separately that the Apache gunships would strengthen the Indonesian government’s anti-piracy operations and broader “maritime awareness”.

Yet rights groups say it will be largely impossible for the United States to dictate the Indonesian military’s use of the new hardware once the sale has gone through.

“The problem is that these are offensive-only weapons, and given the history of the Indonesian military they’re more likely to be used for internal repression than for external defence,” John Miller, U.S. national coordinator for the East Timor & Indonesia Action Network (ETAN), an advocacy group, told IPS.

“The military will use these helicopters as they want. These are weapons of war, weapons of counter-insurgency, so it would be foolish to expect that the Indonesians wouldn’t use them that way.”

Early last year, when the Apache sale was first publicly discussed, ETAN and about 90 other civil society organisations wrote an open letter to the U.S. Congress, warning, “These aircraft will substantially augment the [Indonesian military’s] capacity to prosecute its ‘sweep operations’ in West Papua [province], and thereby almost certainly lead to increased suffering among the civilian populations long victimised by such operations.”

While Congress must be formally notified of any major military sales to foreign governments (that notification took place in September), Miller says lawmakers raised little objection over the issue.

“There is really only rhetorical help coming from Washington, if that,” he says. “History has shown that military leverage was used quite successfully in the case of East Timor, when these types of sales were specifically withheld or conditioned on easily demonstrated reforms. But today’s members of Congress either don’t know their history or they’ve forgotten this lesson.”

Both Hagel’s trip and the gunships sale are being seen in the context of the United States’ broader attempt to give new priority to Washington’s bilateral relationships with countries throughout Asia. Indonesia could be central to this strategy – Obama is slated to make a trip there in October – and U.S. officials are keen to nurture an ongoing, though contested, reforms process.

Yet in recent years, national and international rights groups have warned that these reforms are not progressing at the rate Jakarta officials or some Western governments have suggested. Meanwhile, a military that for years stood accused of heinous rights violations today remains involved in battles against several internal rebellions.

West Papua, for instance, is a resource-rich province that became part of Indonesia under highly contentious circumstances in the 1960s. Armed separatist groups subsequently began fighting the state, resulting in up to 100,000 deaths by the following decade alone.

That violence continues to this day, with the province one of the world’s most militarised areas.

Last year, during Indonesia’s Universal Periodic Review – the United Nations’ regular look at countries’ human rights records – more than a dozen countries urged Jakarta to take steps to resolve ongoing problems in the region, including impunity for military abuses. Yet the Indonesian government rebuffed each of these recommendations.

Last year also saw a “marked upsurge in violence as Indonesian security forces apparently sought to crack down on Papuan activists,” Human Rights Watch stated in its most recent reporting on the region.

It listed impunity for security forces as “a serious concern”. It also noted, “Much of U.S. policy towards Indonesia has focused on cementing military ties, including with Indonesian special forces, which have long been implicated in serious abuses.”

For decades the United States was barred by law from selling military hardware to Indonesia specifically because of the military’s rights record. But following the 1998 downfall of Indonesian autocrat Suharto after more than three decades in power, President George W. Bush began to roll back these restrictions.

At the time, some U.S. lawmakers warned that such a step was premature.

“I deeply regret that before starting down the road of reengagement, our country did not obtain and [the special forces] did not accept the necessary reforms we have long sought,” he said. “It is notable that this is a small step and [then-Secretary of Defence Robert Gates] made clear that future cooperation, to be consistent with U.S. law, hinges on future reforms.”

While important reforms have indeed gone forward since Suharto’s fall in 1998, ETAN’s Miller warns that many of these processes have now stalled.

“Issues like fully removing the Indonesian military from its internal role, holding the military accountable for past and ongoing human rights violations – at best, that’s happening only in fits and starts,” he says.

“Yet the perception in Washington is that Indonesia is now needed as a central ally in the ‘war against terrorism’ and as a bulwark against China, and that the country has undergone a complete democratic transformation, with the military now fully under democratic control.”

“That’s just not true,” he concludes. “There’s no reason to sacrifice the people of West Papua and other parts of the country for this belief.”