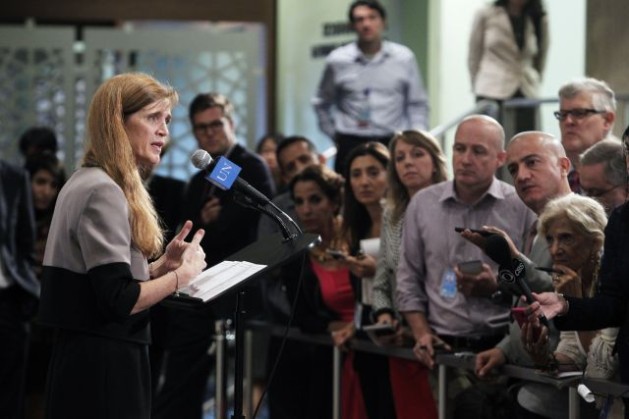 UNITED NATIONS, Sep 10 2013 (IPS) - If Syria eventually agrees to relinquish its stockpile of chemical arms under the 1993 international Chemical Weapons Convention (CWC), what of the six other countries that have either shown reluctance or refused to join the treaty?

Currently, there are 189 states that have signed and ratified the treaty prohibiting the manufacture, use and transfer of the deadly weapons. But seven member states have been holdouts: Burma and Israel have signed but not ratified, while Angola, North Korea, Egypt, South Sudan and Syria have neither signed nor ratified.

If Syria agrees to accept the U.S.-Russia proposal to abandon its weapons under the CWC, it still leaves six others outside the treaty.

A meeting of the Security Council to discuss Syria, scheduled to take place Tuesday, was cancelled without explanation.

If a resolution, inspired by Western nations, is adopted by the Council later in the week, Syria is expected to agree to hand over all of its chemical weapons for storage and destruction by the Organisation for the Prohibition of Chemical Weapons (OPCW) based in The Hague, Netherlands.

Asked what progress the Security Council has made on the proposal, the president of the Council, Ambassador Gary Francis Quilan of Australia, told reporters it was premature to speculate.

Stephen Zunes, professor of politics and international studies at the University of San Francisco, who has written extensively on weapons of mass destruction (WMDs), singled out two other Middle Eastern nations, Egypt and Israel, as either having developed or used chemical weapons.

He pointed out that Israel is widely believed to have produced and stockpiled an extensive range of chemical weapons and is engaged in ongoing research and development of additional chemical weaponry.

“The insistence that Syria must unilaterally give up its chemical weapons and missiles while allowing a powerful and hostile neighbour to maintain and expand its sizeable arsenal of nuclear, chemical and biological weapons is simply unreasonable,” Zunes told IPS.

No country, whether autocratic or democratic, could be expected to accept such conditions, he added.

Egypt was the first country in the region to obtain and use chemical weapons, using phosgene and mustard gas in the mid-1960s during its intervention in Yemen’s civil war.

“There is no indication Egypt has ever destroyed any of its chemical agents or weapons,” said Zunes.

The U.S.-backed regime of former Egyptian President Hosni Mubarak continued its chemical weapons research and development programme until its ouster in a popular uprising two and a half years ago, and the programme is believed to have continued subsequently, he noted.

Asked whether the United Nations has the capacity to handle the weapons, U.N. associate spokesperson Farhan Haq told IPS, “The secretary-general has consistently called for Syria to accede to the Chemical Weapons Convention and to fully abide by its responsibility to maintain the physical security of any chemical weapon stockpiles in its possession.”

The OPCW, which oversees the CWC, has considerable experience storing and destroying chemical weapons.

In a statement released Tuesday, Amnesty International USA said it welcomes steps that would lead to the removal or destruction of Syria’s chemical weapons, given that they are internationally banned and their use is a war crime.

“Taking this initiative to the U.N. Security Council offers an opportunity for the international community to take other concrete action to stop the flow of conventional weapons that have caused the vast majority of civilian deaths, refer the situation for criminal investigation, and demand unfettered access for the U.N.-mandated Commission of Inquiry,” said Amnesty’s Deputy Executive Director Frank Jannuzi.

Asked about the proposal to transfer Syria’s chemical stocks to international control, Secretary-General Ban Ki-moon told reporters Monday, “I think that would be proper [thing] for Syria to do, to agree to these proposals.

“Then I am sure that the international community will [take] very swift action to make sure that these chemical weapons stocks will be stored safely and will be destroyed. I do not have any doubt and worry about that. First and foremost, Syria must agree positively to this,” he added.

Harking back in history, Zunes told IPS Syria’s chemical weapons programme was established in response to Israel’s development of a chemical and nuclear arsenal.

When it had a non-permanent seat on the Security Council in December 2002, Syria introduced a draft resolution to this effect, but it was not tabled due to a threatened U.S. veto, he added.

Zunes said for more than 45 years, the Syrians have witnessed successive U.S. administrations provide massive amounts of armaments to a neighbouring country with a vastly superior military capability which has invaded, occupied, and colonised Syria’s Golan province in the southwest.

In 2007, the United States successfully pressured Israel to reject peace overtures from the Syrian government in which the Syrians offered to recognise Israel and agree to strict security guarantees in return for a complete Israeli withdrawal from occupied Syrian territory, he noted.