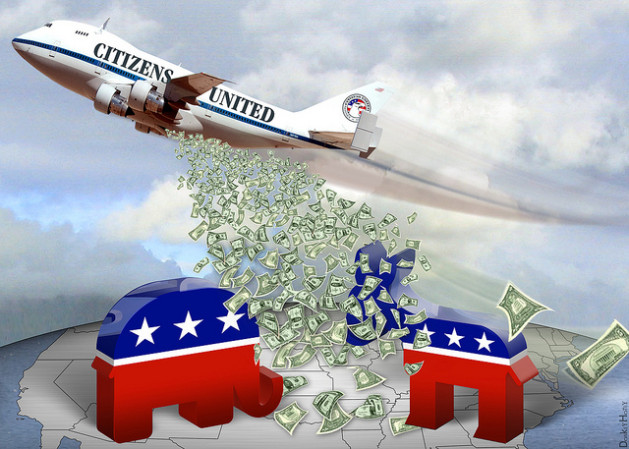 The new glut of money in U.S. politics stems from a landmark 2010 decision by the U.S. Supreme Court known as Citizens United, which created new opportunities for almost unlimited anonymous corporate spending on political causes. Credit: DonkeyHotey/cc by 2.0

WASHINGTON, Nov 27 2013 (IPS) - The U.S. government has proposed strengthening an obscure tax-status designation that supporters say could significantly impact upon the massive amounts of anonymous money that have come to define U.S. politics over the past two campaign cycles.

Two federal agencies, the Treasury and the Internal Revenue Service (IRS), on Tuesday issued initial guidance that could tighten regulations on the extent to which certain tax-exempt groups can engage in political activities. While such designations are highly coveted, critics have increasingly complained that the rules governing these groups’ activities are overly vague and often unenforced, lending themselves to abuse.

Following on Tuesday’s announcement, such critics have almost universally lauded the proposals as a strong first step, but warned that significant work remains. Others worry that the new moves would infringe on a constitutionally guaranteed right to free speech.

“This is definitely an encouraging sign from a federal agency that’s been almost completely absent in terms of regulating these groups. But the devil will be in the details,” Paul S. Ryan, a senior counsel at the Campaign Legal Centre, which works on campaign finance issues and has sued the IRS over the issue, told IPS.

“Remember, though, what is at issue here is disclosure for voters. This rulemaking isn’t necessarily about getting involved in elections, but rather about disclosing donors.”

The new glut of money in U.S. politics stems from a landmark 2010 decision by the U.S. Supreme Court known as Citizens United, which created new opportunities for almost unlimited anonymous corporate spending on political causes. The decision remains bitterly disputed by many across the country, with more than a dozen states having formally called for it to be overturned.

According to official estimates, some 300 million dollars was funnelled into the 2012 presidential election from anonymous donors through tax-exempt organisations (others have pointed out that this figure is relatively small compared to the seven billion dollars that was spent cumulatively in the 2012 election).

Activists today refer to such secret funding as “dark money”, some 85 percent of which is estimated to have gone to conservative groups in 2012.

The vehicle of choice for many of these donors has been a type of organisation known by its tax-code designation as a 501(c)(4). Also known as “social welfare” organisations – given that this is supposed to be their primary focus – these groups have the enticing position of having some wiggle room in how politically involved they can be, while also being able to keep their contributors largely private.

On the contrary, the IRS allows other such groups to engage wholly in the political process, but these are required to disclose their donors’ identity.

“The proposed rules are a positive step towards reining in political groups charading as ‘social welfare’ nonprofits while devoting almost all of their resources towards influencing elections,” Brendan Fischer, general counsel for the Centre for Media and Democracy, a watchdog group, told IPS.

“The notion that spending obviously intended to influence elections somehow advances ‘social welfare’ is absurd, so hopefully the proposed rules will provide some clarity to the law and shine light on the dark money. The proposed rules still have to go through the rulemaking process, but hopefully the final rules will resolve some of the ambiguity in the tax code that led to such abuses.”

The new move comes just months after heated, politicised accusations that the IRS had been disproportionately scrutinising the applications of conservative groups seeking tax-exempt status. While subsequent disclosures suggested that the agency had been targeting both obviously conservative and obviously liberal groups in an effort at efficiency, the broader debate highlighted new public confusion over why any of these clearly political groups were under consideration as “social welfare” organisations in the first place.

In fact, U.S. law largely prohibits such groups from engaging in any political activities, but implementation of this statute has always come down to the IRS’s interpretation.

“This is part of ongoing efforts within the IRS that are improving our work in the tax-exempt area,” IRS Acting Commissioner Danny Werfel said Tuesday. “Once final, this proposed guidance will continue moving us forward and provide clarity for this important segment of exempt organisations.”

In particular, the IRS is proposing to redefine exactly what is meant by a key part of these designations – the term “candidate-related political activity”. Stating that it foresees “significant public interest” in the issue, the Treasury is now eliciting public comment through late February.

“For decades the IRS has used a ‘primary activity’ test to determine how much political activity is too much, but it has never really provided any clarification on this activity,” the Campaign Legal Centre’s Ryan says.

“So the dark money groups have said that up to 49.9 percent of their activities can be political, while we’ve been saying that an appropriate level would be far lower, around 10 or 15 percent. The strength of this new rulemaking will be where the IRS draws that line.”

Others are warning that the issue shouldn’t be up to IRS interpretation, and are pushing the courts to clarify the intent of current law once and for all.

“While we welcome this action, we need a definitive and bright line ruling from the court,” Chris Van Hollen, a member of Congress who sued the IRS on this issue over the summer, said Tuesday.

“The public has a right to know who is spending millions to influence the outcome of our elections and we must put an end to this flow of secret money. That is why I filed my lawsuit against the IRS in August.”

Even if the rule change does result in a significantly strengthened regulation regarding 501(c)(4)s, many are now urging additional official scrutiny on other tax-exempt organisations. Action from the IRS could well push anonymous donors out of the 501(c)(4)s and into, instead, groups such as trade associations, which are bound by different and looser regulations.

The CampaignLegalCenter, for instance, is urging officials to look into these groups as well, and think about tightening restrictions on their political activities.

“Ultimately, this is a necessary but incomplete measure,” the Centre for Media and Democracy’s Fisher says.

“Billionaires and their lawyers will continue looking for new ways to buy elections in secret. What we really need is a constitutional amendment to reverse Citizens United and get money out of politics.”