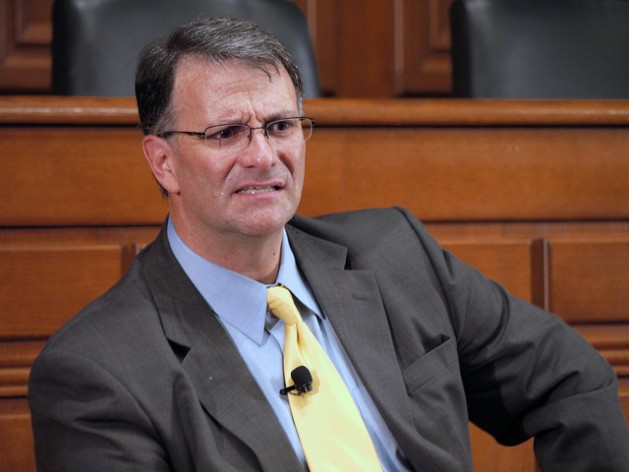 During a visit Wednesday to the Georgia State Capitol, Abramoff spoke with lawmakers and citizens about his many years of experience corrupting lawmakers as a lobbyist.

Asked by IPS why, after spending three years in prison, he did not just go home, he replied “I wanted to. [But] I got upset with fake reform.”

The “fake reform” Abramoff is referring to includes various measures passed in the wake of the 2005 scandal.

“Congress believes it took its medicine when it passed the Honest Leadership and Open Government Act in 2007,” said Melanie Sloan, executive director of Citizens for Reform and Ethics in Government.

“[But] a lot of the kinds of events that were banned were just moved,” she told IPS. “You couldn’t take a member of congress or staff off to lunch, but you can have a campaign event. [And] It’s a much more expensive event.

“There’s not a lot of incentive for them [Congress] to change the rules – they want lobbying campaign cash, and they want to become lobbyists when they leave,” Sloan said.

In 2006, Abramoff pled guilty in connection with his lobbying on behalf of Native American tribes and his dealings with SunCruz Casinos.

Abramoff, along with a partner, Michael Scanlon, was found to have defrauded six Native American tribes out of 66 million dollars by overcharging them for lobbying fees, then keeping nearly half of it himself in kickbacks.

“I did violate the trust of my clients. I brought Scanlon to them. I had a deal with Scanlon, if there was a profit we would split it. I didn’t inform them,” Abramoff said.

As a result of the various federal investigations into Abramoff’s lobbying activities, 21 people either pled guilty or were found guilty of numerous crimes, including senior George W. Bush administration officials, Congressional staffers, and one U.S. congressman, Bob Ney, a once high-ranking Republican from Ohio.

In 2006, former U.S. House Majority Leader, Tom DeLay, a Republican from Texas, resigned as a result of investigations into his close ties to Abramoff.

Abramoff was an expert at showering members of Congress and their staffs with gifts, donations, and sometimes promises of job opportunities, in exchange for their support of legislation favourable to his clients.

After his release from federal prison, Abramoff told CBS’s 60 Minutes programme that he at one time had wielded significant influence in over 100 Congressional offices.

He spent more than one million dollars per year on ticket sales for sporting events for members of Congress and their staff, including two skyboxes at Washington Redskins Games.

In 2011, he wrote a book called “Capitol Punishment: The Hard Truth About Corruption from America’s Most Notorious Lobbyist.”

He told IPS he is now working on a series of legislative proposals regarding ethics reform, acknowledging that, in a sense, he is becoming a lobbyist again, this time on the other side.

He joked that perhaps it would not be the best idea for members of congress to hear, “Mr. Abramoff the lobbyist is here to see you.”

Abramoff said there are four key aspects to ethics laws that he believes should be in place in any democratic society.

First, “If you’re lobbying Congress and you get paid, you’re a lobbyist and you have to register,” he said.

Sloan agrees with that proposal. “I think it’s reasonable to require a lot more registration. The current standards are not strong enough. There should be more people who should have to register… [such as] the people like [former Congressmen] Newt Gingrich and Tom Daschle who often call themselves consultants but seem to be involved in strategies that involve lobbying,” she said.

Abramoff also argues that lobbyists should be banned from giving more than a small total amount of campaign contributions to members of congress each year.

This means, “No lobbyist involved in any aspect of federal fundraising, no bundling, no events; this includes campaigns, political parties, any SuperPACs.”

Third, he believes that for any business or nonprofit entity that wants a grant or loan from the federal government, the directors and key officials of those entities should be prohibited from making campaign contributions to congress.

“These [the second and third] proposals may run into constitutional problems, since money is speech,” Sloan said, referring to recent rulings of the U.S. Supreme Court.

“Making limitations on the amounts of contributions you can make, there are constitutional issues. It’s possible you can write [legislation] around it, but it’s not 100 percent clear you could write a bill and it would work,” she said.

Lastly, he argues that federal employees should be barred from becoming lobbyists for 10 years after leaving their government jobs. In his book, he describes recruiting congressional staffers:

“After a number of meetings with them, possibly including meals or rounds of golf, I would say a few magic words: ‘When you are done working for the Congressman, you should come work for me at my firm.’

“With that, assuming the staffer had any interest in leaving Capitol Hill for K Street – and almost 90 percent of them do – I would own him and, consequently, that entire office. No rules had been broken, at least not yet. No one even knew what was happening, but suddenly, every move that staffer made, he made with his future at my firm in mind.”

CCGA is one of the organisations sponsoring Abramoff’s events in Atlanta.

“This is somebody who was able to manipulate the system so well, he was the best at it. The core of his message is, money from special interests is corrupting the process. That’s what we’re trying to articulate,” Perry said.

“There’s not bad people in these halls,” Perry said, referring to the Georgia State Legislature. “[But] what they do is they trade money for outcomes. That’s bribery.”