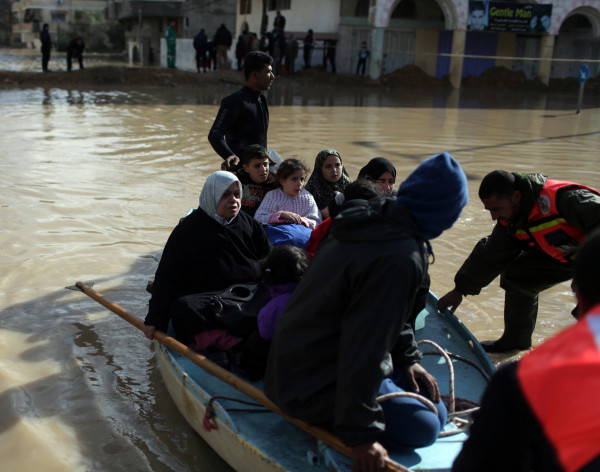 GAZA CITY , Dec 20 2013 (IPS) - Wearing tattered shoes and hopping between dirty puddles, 14-year-old Sabeh manages to find his way to the market at the Al Shati refugee camp, one of Gaza’s most heavily populated and poor areas.

He asks a man selling socks if he can buy a pair for one shekel (29 cents). Sabeh looks despondent when the salesman says, “three shekels and no less.”

The boy protests and says his feet are freezing, but the salesman is adamant. Sabeh tries again: “But I’m freezing and this is all I have.” Both know the socks won’t help as long as Sabeh’s shoes are torn and soaked in cold, slushy sewage water.

Alsweriki is concerned how their properties, damaged by flood and sewage water, will hold up as Israel continues its blockade on materials needed for repairs in Gaza.

A torrent of heavy rain over Gaza this week forced 40,000 residents out of their homes – 5,000 of them had to be evacuated by Palestinian rescue crews in boats. Two people were killed and at least 108 injured, according to Dr. Ashraf Al Qedra, spokesman for the Gaza health ministry.

Storm Alexa that hit Gaza is a ‘once-in-a-century storm’. Israeli meteorologists have called it the worst since 1879.

Beginning a week ago, Alexa crossed Syria, Palestine, Israel and some parts of Sinai. A thick blanket of snow covered the West Bank and some areas in Gaza too experienced snow – something that hasn’t occurred in years.

The 1.8 million people of the Gaza Strip, who struggle every day under an Israeli blockade, were unprepared for a storm that has affected every aspect of their life. Low-lying areas are the hardest hit, with thousands of homes flooded.

The flimsy door of Noor Pharmacy at Al Nafaq Street can’t stop the water and it pours in, inundating the cupboards and drenching the medicines. The owner seems to be at a complete loss as to where to begin repairing the damage, but is well aware that his losses may never be adequately compensated.

Nafaq Street has been badly affected by the rain and flooding, but doesn’t get as much attention as other areas that have been damaged by Israeli attacks. The heavy rain and snow is an extra burden for Gaza, which is already going without power.

Families on Nafaq Street were evacuated to a neighbourhood school-turned-makeshift shelter.

Thirty-year-old Shadi Alsweriki’s house was flooded. He was unable to retrieve anything while fleeing the gushing waters. Now all he has is two blankets and two mattresses for himself, his wife and two small children. He got food from humanitarian groups, but his family’s needs are far from taken care of.

Yasser Al Shanti, deputy head of the crisis team, says the burst of rainfall was above 90 percent of the average annual rainfall in Gaza.

The timing of the storm could not have been worse as it came amid fuel shortages and electricity cuts in Gaza brought on by tighter Egyptian controls in the south and high taxes on fuel prices by Israel in the north.

Mosques have asked people to donate spare blankets and clothes, and some trucks have made their way to the worst-hit areas. But supplies are sparse.

A rescue team member stands on a boat and another man stands on his shoulders trying to reach up to some people stuck without any food or clean water in a third floor apartment.

Mohammed Abu Draz, 43, who is from Abbasan in the south Gaza Strip, is stunned by the turn of events. He was preparing to take the produce from his three chicken farms to Gaza markets when the rains came and destroyed everything.

“There used to be 5,000 chicks over there,” said Abu Draz pointing to the remains of a farm about to be removed by municipality bulldozers.

Gaza minister of agriculture Ali Al Tarshawi has accused Israel of opening sewage water dams in Wadi al Salqa along the border, resulting in the flooding of agricultural land and farms.

Al Tarshawi says there has been 1.7 million dollars worth of damage to livestock.

A spokesman of the United Nations Relief and Works Agency (UNRWA) said that following the storm, “the world community needs to bring effective pressure to end the blockade of Gaza.”

In response to de facto Prime Minister Ismail Haniyeh’s appeal to the Emir of Qatar, 10 million dollars have been handed to the Palestinian Authority to buy fuel from Israel for Gaza’s power plant.

Gaza has suffered more than 45 days of blackouts lasting up to 18 hours daily. During the storm, some areas had no power for 72 continuous hours. Now 450,000 litres of fuel donated by Qatar has arrived to help resume operations at Gaza’s sole electricity plant.

Minister of housing Yousef Ghuriz, who is in charge of crisis teams, estimates that the damage to homes, infrastructure and businesses from the rain and floods is around 64 million dollars.

After flood waters were pumped out, some Gazans have been able to go back to their homes, but rescue teams say at least 4,000 people are still living in schools-turned-makeshift shelters.

Alsweriki has been given 140 dollars as aid to put his life back on track, but he and his family have been asked to leave the school that is his only shelter at the moment.

Like other victims, he is concerned about how their properties, damaged by flood and sewage water, will hold up as Israel continues its blockade on materials needed for repairs in Gaza.

Life, as they knew it, has slipped away.