WASHINGTON, Jan 24 2014 (IPS) - In an unusual statement, the World Bank’s private-sector arm has threatened to cancel a controversial investment in a Honduran palm oil company that has been implicated in serious human rights abuses, including numerous killings, over the past five years. 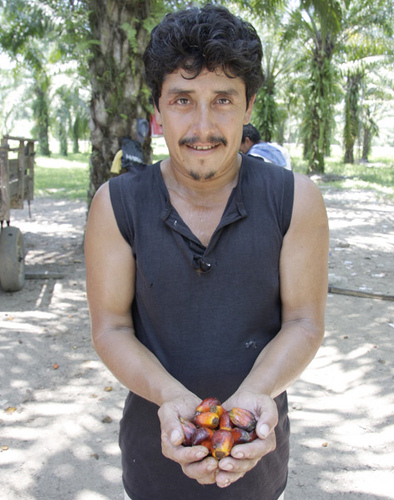 A member of the Aguan Valley Palm Producers Association holds the fruit from which palm oil is extracted. Credit: USDA/cc by 2.0

The statement came two weeks after the release of a damning report by the Office of the Compliance Advisor/Ombudsman (CAO) of the International Finance Corporation (IFC) that concluded, among other things, that Bank officials should have raised serious questions about the alleged complicity in those abuses by Corporacion Dinant before approving a 30- million-dollar loan to the company in 2008.

The company, which is owned by Miguel Facusse Barjum, “the wealthiest, most powerful businessman in the country,” according to a State Department cable obtained by Wikileaks, is based in the lower AguanValley, a region populated by hundreds of campesino cooperatives established there as a result of a far-reaching land-reform programme initiated in the 1960s.

Conflicts over Dinant’s efforts to buy up these communities’ lands under a 1992 law designed to favour the country’s burgeoning privately-owned agro-export industry, account for many of the abuses.

Since the 2009 military coup, which ousted a pro-reform president and which was reportedly backed by Facusse, nearly 100 people – mostly campesinos, as well as some Dinant employees – have been killed in the valley, according to press reports, although Rights Action, a Washington-based group that has closely monitored the conflict, estimates the campesino death toll at “well over one hundred.”

“IFC has not disbursed funds to Dinant since 2009, and will not disburse further funding until Dinant fulfills its commitments in the Action Plan (worked out between the IFC and Dinant in light of the ombudsman’s report), including strengthening its community engagement and environmental and social standards, and reviewing its security practices,” the IFC said.

“Should Dinant fail to meet these commitments, IFC stands prepared to exercise all remedies available, including cancelling the loan,” according to the statement, which also promised to “refine” its action plan to take account of recent criticism by international and Honduran civil-society organisations (CSOs) and “reflect on” internal problems that led to mistakes.

While many CSOs welcomed the IFC’s latest statement, comparing it favourably to the agency’s initial, more ambiguous reaction to the CAO report, they said it still fell short of what is required to redress the situation.

“The only real difference from its previous statement is that they explicitly said the possibility of cutting off the loan remains open if the action plan is not complied with,” Annie Bird, who directs Rights Action, told IPS.

“The action plan that the IFC is proposing is completely inadequate. People are going into hiding, afraid of being killed, and entire communities remain in constant fear of being evicted from their land. And the IFC really isn’t doing anything to do about it. It’s just calling on the Dinant Corp to work with the government.”

Her disappointment was echoed by Berta Caceres, co-ordinator of the Honduras-based Indigenous Lenca organisation (COPINH). “There is a risk that the situation of violence and impunity which exists in the Bajo Aguan will repeat itself in the future, if the World Bank does not investigate this company’s activities nor consult indigenous communities, farmers, and Garifunas,” she said.

The original 30-million-dollar loan – part of a 100 million dollar package that included Germany’s development bank, the Inter-American Development Bank (IDB), and the Central American Bank for Economic Integration — was signed in April 2009 to fund expansion of Dinant’s snacks and edible-oils processing facilities.

In November 2009 – four months after the military coup that ousted elected President Manuel Zelaya – the IFC disbursed 15 million dollars in support of the project.

One year later, a coalition of CSOs asked the CAO to audit the project and its implementation in light of the human-rights situation in the valley.

The German development bank cancelled its 20 million dollar loan in 2011 after one rights group, Food First Information and Action Network (FIAN), submitted “evidence of the involvement of private security forces hired by Dinant and other companies owned by Miguel Facusse in human rights abuses and, in particular, in the murder of peasants in Bajo Aguan.”

In its 72-page report, the CAO concluded that IFC staff had violated the agency’s own rules by failing to undertake due diligence in assessing and responding to risks of violence and forced evictions and to consult adequately with the agency’s environmental and social specialists on the project.

These deficiencies, it found, were in part due to its culture and incentive system that effectively encouraged staff to “overlook, fail to articulate, or even conceal potential environmental, social, and conflict related risks.”

In response, the IFC took issue with some findings but agreed with others and set forth an “Action Plan” which was immediately denounced by most of the CSOs, including HRW, as inadequate. Their reaction, as well as negative international media coverage, reportedly triggered the Bank board’s demand that the agency revise its plan – details of which have not been disclosed — and issue a new statement.

The statement differs mainly from the IFC’s initial reaction in the apologetic tone it assumes, stressing, for example, that it “acknowledges that there were shortcomings in how we implemented our environmental and social policies and procedures…

“As noted in the audit, IFC must take a broad view of the country and sector risks when considering projects. Additionally, we need to pay more attention to a client’s security practices and preparedness in fragile country situations,” it said.

But its contrite tone failed to appease the CSOs or some Honduras experts.

The IFC’s reliance on the Honduran government in resolving the land conflicts and addressing the human-rights situation made little sense, according to Dana Frank, a Honduras specialist at the University of California at Santa Cruz.

“There’s a reason why the national government is not intervening in the Aguan valley to stop these killings of campesinos and why there’s complete impunity for the security forces and private security guards who have been killing them,” she told IPS. “It’s because Facusse is a formidable power in the national state.”

Indeed, the Facusse family, of which he, at age 90, is considered the partriarch, is widely seen as the most important and influential in what is essentially an oligarchic system.

Rights Action’s Bird also complained about the inadequacy of the response, insisting that the IFC should not only cancel the loan but also work with the affected communities to redress the abuses they have suffered.

She also complained that the IDB, whose own private-sector facility, the Inter-American Investment Corporation (IIC), had participated in the loans to Dinant, has never audited its own performance. “Instead, the IDB is initiating a 60 million dollar loan to create a police intelligence unit that human rights organisations in Honduras are screaming about because the security forces there are out of control,” she said.