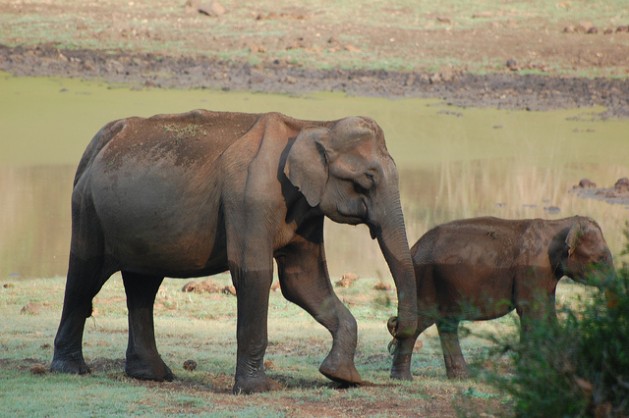 Elephants in the Andaman and Nicobar Islands. Credit: Malini Shankar/IPS

WASHINGTON, Feb 10 2014 (IPS) - A group of international organisations fighting illicit wildlife trafficking has unveiled a new website aimed at assisting whistleblowers who want to aid in the fight against wildlife crimes.

WildLeaks, the first platform of its kind, is an online portal where its creators say whistleblowers can safely and anonymously reveal information on wildlife crimes. Globally, this illegal trade is thought to be worth over 17 billion dollars a year, some of which is thought to be helping finance terrorism, particularly in Africa.

“We encourage whistleblowers to use the completely anonymous process, especially if they live in oppressive regimes." -- Andrea Crosta

Officially launched on Feb. 6, WildLeaks is funded by the U.S.-based Elephant Action League (EAL) and run by a group of former law enforcement officers, journalists and environmental NGOs across five continents.

“The goal of WildLeaks is to facilitate the arrest and the prosecution of traffickers, corrupt government individuals, and anyone behind wildlife and forest crime,” Andrea Crosta, EAL’s co-founder and the central figure behind the WildLeaks initiative, told IPS.

Any individual who witnesses a wildlife crime or possesses any type of related information – documents, files, images or videos – can use the website to transmit that information to WildLeaks, using either of two routes of varying strength encryption.

The completely anonymous encryption route makes use of ‘Tor’ technology – more commonly known as the ‘Dark Net’ – and does not disclose the sender’s IP address or any other information.

“We encourage whistleblowers to use the completely anonymous process,” Crosta said, “especially if they live in oppressive regimes where communication is not free and where local governments themselves may actually be engaging in wildlife crime.”

The name of the new initiative is meant to resemble that of WikiLeaks, the group that has drawn much public attention over the last few years by disclosing secret U.S. government documents. But the WildLeaks initiative is designed to be substantially different from its namesake.

“First of all, we’re not after government or military documents,” Crosta said. “And second, while WikiLeaks tends to share everything with the media right away, for us that’s only the last option.”

Once WildLeaks receives any leaked information, the individuals and organisations behind the project will first assess its accuracy and reliability. Thereafter, WildLeaks will try to forward the findings to law enforcement agencies such as Interpol or to trusted government authorities.

However, if governments will not cooperate, the last option would be a leak to the media.

“It’s important to underscore that our goal is to work side by side with law enforcement agencies across the globe,” Crosta said. “We want to create a bridge between the public and law enforcement.”

Initial response to the new project has been positive.

“We strongly encourage anyone with information about wildlife crimes to report them to the appropriate law enforcement agency,” a spokesperson with the Humane Society of the United States (HSUS), the country’s largest animal protection organisation, told IPS when asked about the WildLeaks initiative.

The launch of WildLeaks comes only days before a major international anti-wildlife crime conference kicks off in London, on Feb. 11. Hosted by the British government, the conference will bring together key actors in the global wildlife community to craft a global response to the illicit killing and trading of wildlife and forests.

“Every great journey starts with one small step. This is a very important first step from China and it should be encouraged,” Knights told IPS in an interview.

Today, the profits from illegal wildlife trafficking are widely believed to be larger than the trafficking of small arms, gold, diamonds and oil. The illegal trade of tiger skins and ivory tusks has led to the estimated death of over 50,000 elephants a year and to an estimated population of fewer than 3,500 wild tigers across Asia, the Environmental Investigation Agency reports.

Last month, the Washington-based Stimson Centre released a report in which it showed evidence of the strong links between wildlife poaching and the financing of international terrorism.

“There is very strong evidence today that groups in the Central African Republic, in Somalia, and in the DRC are heavily involved in poaching,” Varun Vira, an analyst with C4ADS, a security firm here, told reporters at the launch of the report last month.

Activists and analysts alike believe that one of the largest terrorist organisations on the African continent, Al Shabaab, funds much of its activity through the illegal trade of ivory.

The Obama administration, too, has taken some steps toward fighting illegal trafficking in wildlife products. In July 2013, the U.S. president signed the Executive Order on Combating Wildlife Trafficking, committing to assist “those governments in anti-wildlife trafficking activities when requested by foreign nations experiencing trafficking of protected wildlife.”

Obama has tasked several U.S. government agencies and departments with the enforcement of the new directive, including the Departments of Defence, Treasury, Homeland Security and the U.S. Agency for International Development (USAID).