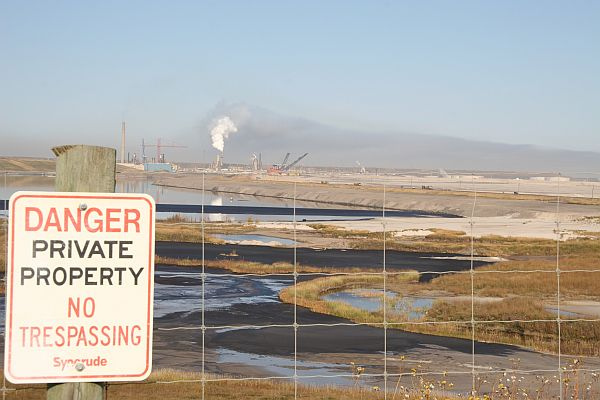 TORONTO, Mar 17 2014 (IPS) - Job cuts totalling 1,000 announced at Environment Canada’s climate change division this month means there will be even fewer government scientists onboard to monitor the impact of the extraction, development and transportation of crude oil from the carbon-intensive oil sands in Alberta.

The oil sands are a major source of fossil fuel emissions which are heating areas of the planet, including the Arctic.

“These audits are clearly designed to intimidate and disrupt their work." -- Dennis Howlett

But two experts on Canadian environmental policy say they expect fewer such studies to be financed by a Conservative government in Ottawa focused on the development of the Alberta oil sands.

“This government is taking out specific forms of [research] capacity and those are the kind of things we need to have if we are ever going to tackle climate change,” said John Bennett, executive director of Sierra Club Canada.

“[With] any government that comes into power in the future, it’s going to take them two or three years to get the staff, to review what they have to do,” he told IPS.

Picking up the investigative slack but without the same amount of resources are the environmental NGOs such as the David Suzuki Foundation and the Pembina Institute, said Mark Winfield, a professor in the faculty of environmental studies at Toronto’s York University.

“These functions of NGOs in the public policy process have become even more important as the capacity to provide evidence-based analysis — contrary to what the current government wants to hear — continues to be diminished in Ottawa,” Winfield said in a recent blog post.

Enemies of the state?

Another aspect of this story, adds the Sierra Club's John Bennett, is the tendency by the Conservative government to direct unfounded “slurs” against the environment charities, the result of which could hurt their ability in the long term to get donations from philanthropic foundations, another significant source of funding.

In his lead-up to the February federal government 2014 budget, Minister Jim Flaherty told reporters, "There are some terrorist organisations, there are some organised crime organisations that launder money through charities, and make donations to charities."

But upon the budget release, no further details were offered by Flaherty with regards to his charges.

“We have never had ministers of crown accuse us of illegal activity without evidence,” said Bennett.

“We have a very different situation under the present regime. It sees public interest organisations and not just environment ones [as] as political opponents, rather than contributors to public policy,” he added.

He points for instance to a report by the Pembina Institute that offers evidence of  a “significant increase” in fossil fuel emissions if a proposed west-east pipeline from Alberta to New Brunswick carrying crude oil from the oil sands is built.

Both Suzuki and Pembina are among several leading environmental organisations that have charitable status under Canadian tax regulation and thus are able to provide tax receipts for Canadians donating money for research into climate change, oil and gas development and other pollution issues.

However, since the 2011 federal election when Prime Minister Stephen Harper and his Conservative party won a parliamentary majority, these same NGOs have faced the prospect of losing their charitable status for allegedly straying past the legal 10 percent budget limit for  political activity.

The federal government’s rhetoric heated up when natural resources Minister Joe Oliver in early 2012 warned publicly of “radical” environmentalists “threaten[ing] to hijack our regulatory system to achieve their radical ideological agenda,” with their opposition to proposed oil pipeline projects.

Oliver stated then that these same groups rely on funding from “foreign special interest groups.”

Mark Winfield worries that CRA is raising “profound issues about the rights of Canadians,” by its actions.

The scorecards that NGOs introduce at election time to compare the positions of the various political parties on specific environmental issues including climate change may represent a crossing of the fine line between research and political advocacy, said Philippe Brideau, a spokesperson for the Canada Revenue Agency.

“In general, the CRA would likely consider a charity that rates political parties to be carrying on a partisan political activity.”

University of Toronto political scientist Nelson Wiseman is not adverse to some restrictions, although he is uncomfortable with some of the government’s rhetoric directed towards the NGOs.

“I think it is perfectly okay to publish data. But I am not sure it is proper to get tax money and get up and say ‘the Conservatives are killing the environment,’” he told IPS.

At the same time, Wiseman said he is not sure that Canadian organisations taking foreign money is necessarily illegal or even a bad thing.

“If there is some group that arises and wants to build democracy in the Ukraine, we want to give them some money. It could be illegal according to Ukrainian law. I suspect it is not illegal here.”

Recently revealed internal documents indicate that the Canada Revenue Agency is investing 12 million dollars (U.S.), more than then the 7.2 million previously announced, in an ongoing multi-year audit until 2017 of environmental NGOs with legal charity status.

John Bennett at the Sierra Club, which is not being currently audited, said the political restrictions were never an issue for the NGOs until the Harper government came along and unleashed the CRA.

“There are things that groups have been doing for years and years and are now being told those are not qualified activities,” he explained. 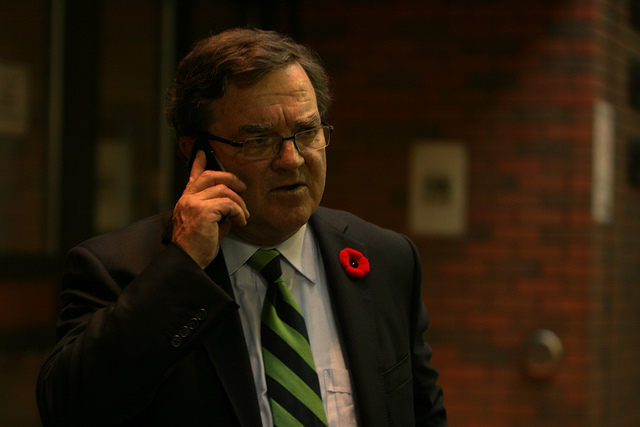 Finance Minister Jim Flaherty has made vague allegations about ties between NGOs and organised crime. Credit: Joey Coleman/cc by 2.0

Environmental NGOs, for instance, have historically worked with corporations within an industry like forestry to establish a sector-based code of conduct that respects the land, water, flora and fauna during any resource extraction activity.

Now, under a “retroactive” interpretation of political activity for charities by the CRA, that kind of consultation is being disallowed, said Bennett.

“This is the kind of activity which we thought was very positive, so trying to say that we can’t do that anymore is a way to get us out of the business of being an influence for change in society,” he said.

Philippe Brideau at the CRA counters that the issue of a code of conduct is not as clear-cut with regards to consultation.  “It depends on whether the actual activity fits the definition of political activity,” he said.

But Dennis Howlett, executive director for Canadians for Tax Fairness, argues that the Harper government is using the CRA to conduct a political “witch-hunt,” against NGOs daring to criticise public policy.

He notes that a similar form of “intimidation” of ongoing auditing is also occurring with organisations focused on international development.

“These audits are clearly designed to intimidate and disrupt their work, so instead of going in and auditing and saying, ‘no everything’s fine,’ they keep the audit open, and they don’t conclude the audit. They don’t come to any resolution; they just keep the charities hanging… I know of audits that have been going on for a year.”

Furthermore, Howlett points to the reported staff cuts at the Canada Revenue Agency over a three-year period totaling close to 3,000, plus another approximately 100 jobs lost in the units assigned to investigate overseas tax evasion and aggressive tax planning, and finally the disbanding of a special unit devoted to organised crime.

“These would be the more experienced trained auditors, forensic accountants, people with a fair high level of education and training and experience,” Howlett told IPS.

“CRA has lost a lot of key staff and their ability to investigate both individuals using tax havens to hide their money, as well as corporations who are shifting profit through tax havens to reduce their product and their tax bill.”

Brideau counters that the CRA “takes its commitment to detecting and addressing non-compliance with Canada’s tax laws seriously.” He denies that any auditors have been cut in his department.

“Reductions in staff are limited to individuals performing programme or corporate support functions,” he told IPS.