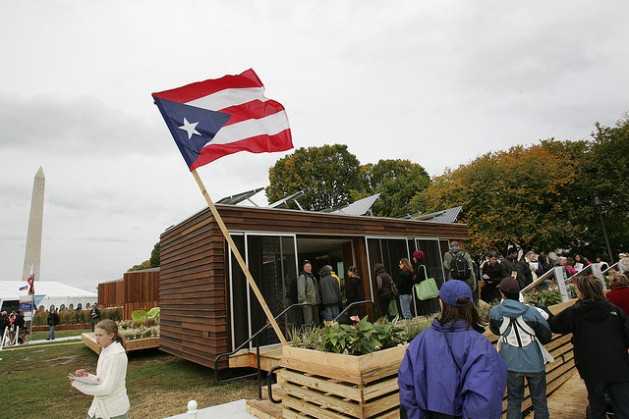 The University of Puerto Rico showcases a solar-powered home at the 2009 Solar Decathlon in Washington, D.C. Five years later, renewable energy sources have yet to be used widely on the island. Credit: Stefano Paltera/US Dept. of Energy Solar Decathlon

SAN JUAN, Apr 28 2014 (IPS) - Everyone in Puerto Rico agrees that the island’s ailing Electric Power Authority (PREPA) is badly in need of an overhaul, both in engineering and economic terms.

Its inefficient, largely obsolete, and highly polluting generating facilities, most of which use petroleum as fuel, require expensive repairs or must be replaced altogether.

“There is no free lunch. Technological fixes are traps." -- Juan E. Rosario

Its finances are in a shambles. The utility’s debt stood at just over 8.95 billion dollars as of 2013, and its rates are rising ever faster, with commercial and residential ratepayers crying for relief.

However, there is sharp disagreement among stakeholders as to what is to be done. PR Senate president Eduardo Bhatia presented an energy reform bill, approved by the Senate and currently being considered by the House, that he claims will bring efficiency, transparency and clean and cheap energy.

Its proposals include net metering and a new regulating entity that would oversee rates and assure transparency.

“In order for energy costs to go down, we need to demand clean and cheap energy. We need efficient generating plants. Through this bill, PREPA is given a timetable to generate 60 percent highly efficient energy as required by industry and by U.S. regulations,” the Senate president told the local press earlier this month.

Puerto Rico is a commonwealth of the United States. It is subject to U.S. laws and regulations.

Senator Bhatia denies that his bill leads to privatisation of the Authority. “The most important thing is to end the inefficient monopoly that PREPA has been over the years. What I propose is not privatisation.”

But organised labour views the Bhatia proposal as a trojan horse.

The Alliance of Active and Retired PREPA Employees and UTIER, the employees’ union, point out that there is no electricity monopoly in Puerto Rico, given that over a third of the country’s electricity is supplied by private corporations. PREPA purchases electricity from two facilities owned by the Ecoelectrica and AES energy corporations, which burn natural gas and coal respectively.

The Alliance claims that for all their talk about environment and renewable energy, privatisation advocates fail to mention that the private AES facility, which provides the island with 15 percent of its electricity, burns “precisely the most polluting fuel, which is coal, which not only contaminates the air we breathe, but also its ashes are being buried in our coastal plains and it’s contaminating our aquifers.”

In a Mar. 31 communique, the Alliance adds that Bhatia’s proposal for deregulation and free competition actually impedes PREPA from competing in conditions of equality with the private sector.

PREPA’s current rate is 28 cents per kilowatt hour, which is decried by pro-privatisation sectors as one of the world’s highest. Although relatively expensive, it is lower than in Germany (29.2 cents kwh), Denmark (30 cents), Hawaii (34.08 cents), the Philippines (36.13 cents), and the nearby Virgin Islands (52.5 cents), according to data presented by the Alliance.

The utility is economically tied down by 392 million dollars in annual subsidies it is forced to give by virtue of legislation. These include subsidies for churches and other non-profit institutions (three million dollars), the tourism industry (nine million), agriculture (oine million), rural electrification and irrigation (six million), and small businesses (less than one million).

But these pale in comparison to the 261 million dollars given to municipalities, known as the CELI subsidy, 17 million for the 2008 Industrial Incentives Act, and 35 million to subsidise the AAA water utility. These last three comprise 80 percent of all subsidies given out by PREPA.

Privatisation opponents question what will happen to all these subsidies if the Authority is put under the control of private business.

The Alliance and UTIER insist that deregulation and private sector involvement will not lower rates. The Alliance cites U.S. Department of Energy data that show that between 1997 and 2012, electricity rate hikes were higher in deregulated states than in regulated states.

Towering over PREPA’s debacle are the utility’s bondholders, or ‘bonistas’ as they are called in Puerto Rico.

“The utility’s bondholders have been setting the country’s energy policy… they determine where the Authority will invest its money, and what payroll expenses should be,” said UTIER President Angel Figueroa-Jaramillo.

According to the 1974 Trust Agreement that governs the Authority’s relationship with bondholders, if PREPA’s income goes down, rate hikes are automatic.

“The bondholders are people and institutions that have lent money to PREPA,” explains economist Sergio Marxuach of the Centre for the New Economy. “Money is lent through bond issues. In exchange for that money, PREPA makes some promises to those who buy those bonds.”

In its fiscal year 2010 report to bondholders, PREPA boasts that its cost reduction programme includes reducing personnel through “attrition”, that is by voluntary retirements and by eliminating temporary jobs. Between January 2009 and the end of June 2010 the Authority eliminated 739 jobs.

“In the last 15 years, the number of employees has been reduced,” the UTIER president told IPS. “Especially in areas of conservation and maintenance, even though the infrastructure is growing – less people to maintain more infrastructure.”

Marxuach differs in his perspective regarding bondholders. “We could transition to renewable energy and change the energy model without necessarily affecting the bondholders,” the economist told IPS.

“They are only interested in getting paid. They are not in the business of operating power utilities. [For some people] it is convenient to use this group of investors as the boogeyman. We need to be sceptical towards these allegations that the bondholders do not let us do anything, because it is not true.”

What to do about PREPA’s environmental liabilities? How can the utility’s air pollution and carbon emissions be lowered?

“There is no free lunch. Technological fixes are traps,” says environmental activist and organiser Juan E. Rosario, community representative in the PREPA board of directors.

Rosario agrees that Puerto Rico must move to renewable energy but is concerned that the citizenry does not understand the costs involved or the amount of time such a transition will take.

“Wind and solar power are intermittent sources, their availability changes constantly,” Rosario told IPS. “This makes them less reliable than fossil fuels. And this, therefore, presents some serious technical problems. It’s a whole different game with a different set of rules.”

Rosario suggests natural gas as a transition bridge from the current coal and petroleum burning system of today to a future based on renewable energy sources.

“Natural gas is much cleaner, especially with respect to solid particles. This is no small matter. Seventy-five percent of all particulate air pollutants in Puerto Rico that come from stationary sources are produced by PREPA’s facilities,” he said.

But Rosario advises that people must brace for the costs. “The Palo Seco thermoelectric power plant [in the town of Toa Baja] cannot possibly be retrofitted for natural gas. It has to be decommissioned and scrapped, and that can cost 600 million dollars.”

“PREPA can cut emissions by 30 percent just by adopting conservation and efficiency measures. And most importantly, its income must be decoupled from the sale of electricity. If it isn’t decoupled, its management will never have any incentive to be efficient.”