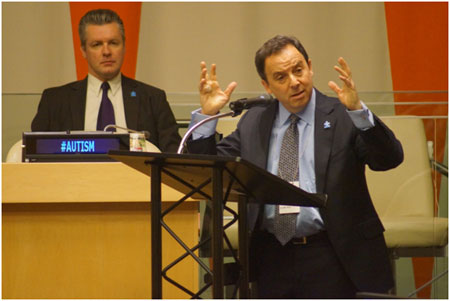 UNITED NATIONS, Apr 3 2014 (IPS) - As buildings and landmarks lit up blue around the world to shine a light on the “World Autism Awareness Day,” the U.N. urged the global community to empower those who live with Autism Spectrum Disorders with equal opportunities to education, employment and integration.

For Ron Suskind, a Pulitzer Prize-winning journalist, gaining equality for his autistic son Owen starts with accepting and understanding his difference.

In 1997, when he heard six year-old Owen describe his brother Walt “like Mowgli or Peter Pan”, he felt “the world turned upside down.” It is the first complex sentence Owen uttered in four years after being diagnosed with autism. “My son speaks Disney, we have to learn that language. It’s a good language,” said Suskind.

Ever since then, the Suskind family has been living in a Disney world: they watch “The Little Mermaid”, “Dumbo”, “Fantasia” and “Bambi,” play the animated characters and speak the language like they are living in the movie scene.

“To perceive things as they are,” Suskind told the panel of diplomats, educators and social activists, “not as we are.”

Today, discrimination against children with Autism Spectrum Disorders still exists in many countries. Due to cultural and social perception, in countries like Indonesia and Nepal, some parents lock up autistic children and give them no access to education or employment.

“Government needs to make primary education accessible, free, and available to all,” said Daniela Bas, Director of the Division for Social Policy and Development of the U.N. Department of Economic and Social Affairs (UNDESA), who, as a disabled child, witnessed the Italian government passed a law ensuring the right to education for children with disabilities in 1970s. “We need to find where our abilities are, and work with them.”

The Centers for Disease Control and Prevention (CDC) named autism one of the fastest growing developmental disabilities in the United States, and estimates that about one in 68 children worldwide have been identified with Autism Spectrum Disorders, compared to one in 150 a decade ago. It is five times more common in boys than girls.

So far, there is no known cure to the disease. It costs at least $17,000 more per year to take care of an autistic child than it does for a child without it, which includes costs of health care, therapy and caregiver time.

“At this time of economic constraint, governments should continue to invest in services that benefit persons with autism. When we empower them, we benefit current and future generations,” said Ban.