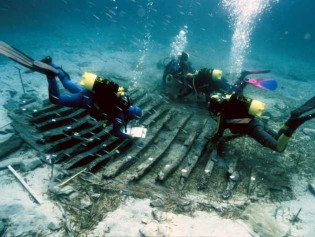 By Lusha Chen
Large amounts of underwater shipwrecks are bringing new opportunities to Small Island Developing States (SIDS) through scientific cooperation and tourism, according to the U.N. Educational, Scientific and Cultural Organization (UNESCO).

By Lusha Chen
Poised on her knees, Betty Augustino is digging out the soil ,inch by inch, under a scorching 110 degree Fahrenheit temperature. She has a goal—to declare this part of South Sudan free of mines, so her brother can also play soccer in the safety of the field.

By Lusha Chen
As buildings and landmarks lit up blue around the world to shine a light on the “World Autism Awareness Day,” the U.N. urged the global community to empower those who live with Autism Spectrum Disorders with equal opportunities to education, employment and integration.

By Lusha Chen
In order to go to school, Sarah, a girl living in rural Ethiopia, escaped the village and an arranged marriage at 14, returning to her home at age 23, when she could finally enter a classroom again. In a conversation with a youth advocate for education, named Chernor Bah, Sarah asked, “Why does it have to be so hard for me, just because I’m a girl?” Sarah used to be one of the 100 million women, mostly from least developed countries (LDCs), who could not read.

By Lusha Chen
Secretary General Ban Ki-moon, a former foreign minister of South Korea, said he was particularly “encouraged” by the agreement reached between the two Koreas on family reunions.

By Lusha Chen
Africa is losing some 50 billion dollars every year due to illicit financial flows (IFFs), an amount that is much higher than the development aid  the continent receives from international donors, said former South African President Thabo Mbeki.

By Lusha Chen
Rolling out renewable “green energy” solutions to refugee camps in five countries from the Middle East, Africa and Asia will improve the well being of more than one million lives, the Office of the UN High Commissioner for Refugees (UNHCR) said during a launch of a two-month campaign to raise funds through the sale of light bulbs at IKEA stores globally.

By Lusha Chen
The UN children’s agency UNICEF may have found a direct way to identify the gaps that keep the most disadvantage children from enjoying basic human rights.  UNICEF’s latest report, titled Every Child Counts, shows the importance of collecting data to reveal disparities among the world’s 2.2 million children.

By Lusha Chen
69 years after the liberation of Auschwitz-Birkenau, the United Nations continues its tradition of remembering the six million Jews who were killed by the Nazi regime with a Holocaust Memorial Day.

By Lusha Chen
On the 67th anniversary of the UN Children’s Fund (UNICEF) --   and in an effort to raise awareness around a growing problem-- the organisation released a new report  on the inequalities of birth registration. It is estimated that one in three children under the age of five might lose the right to celebrate their own birthdays because their birth was not recorded—and nearly 230 million children under five have not been registered. “Birth registration is more than just a right. It’s how societies first recognize and acknowledge a child’s identity and existence,” said Geeta Rao Gupta, UNICEF Deputy Executive Director. “Birth registration is also key to guaranteeing that children are not forgotten, denied their rights or hidden from the progress of their nations.” The report aptly titled Every Child’s Birth Right: Inequities and trends in birth registration, places importance around birth registration as a passport to protection. Without legal registration, children are excluded from accessing education, medical assistance, social security and are often more vulnerable to child labour, forced conscription, child marriage and trafficking. The registration rates vary significantly across regions with the lowest found in South Asia and sub-Saharan Africa. Among the 161 countries that were analysed in 2012 the 10 countries with the lowest birth registration levels were Somalia (3%), Liberia (4%), Ethiopia (7%), Zambia (14%), Chad (16%), United Republic of Tanzania (16%), Yemen (17%), Guinea-Bissau (24%), Pakistan (27%) and Democratic Republic of the Congo (28%).  India had the most unregistered children in 2012—71 million are living anonymously. According to the report, even when a child is registered this does not guarantee the accredited documents proving so—one in seven registered children do not have a valid birth certificate. The implications of not registering a child go far and beyond just having accredited documents because the social, educational and developmental future of the new-born are dependent on a valid record of birth. In Gambia, a father is primarily responsible for registering a child, and in Indonesia, a marriage certificate is a must for birth registration—which means that the children born to a single mother cannot hold the nationality of the country—a barrier to accessing education or any other social rights. There are many additional factors that prohibit a child from being registered at birth, for instance, being unaware of relevant laws and processes, not understanding cultural barriers to facing social discrimination are just a few challenges new parents face.  Natural disasters and on-going conflicts also hinder registration because given each respective crisis, registering children is the last thing on a health workers mind. In Chad, children from Muslim and Christian are more likely to be registered than religious minorities. The list goes on, warily hinting at the inequalities that both women and babies face after childbirth. As time changes and more and more people are turning to technology, organizations like UNICEF are able to tackle birth registration in an efficient way.  By embracing innovative approaches that support governments and grassroots communities in simplifying birth registration process and data collection, slowly, children are being counted. In Uganda, using mobile phone technology, parents can complete the registration procedures in minutes—a process that normally takes months. According to Gupta, “Societies will never be equitable and inclusive until all children are counted.” For the countries that have no data available or have issues registering children at birth, it’s the emphasis placed on technological support that really makes a difference, and which will eventually be one of the determining factors in a child’s future.

By Lusha Chen
American pop singer and songwriter Katy Perry is ready to roar for the world’s most vulnerable children and adolescents. Recently appointed as United Nations Children’s Fund (UNICEF) newest Goodwill Ambassador, she will focus her humanitarian efforts on brining awareness to issues such as severe poverty, violence, abuse, and neglect in regards to children and adolescents—especially in emergency and conflict situations.

By Lusha Chen
About 12 percent of the world’s population is witnessing a growing gap between economic growth (seven percent every year) and employment growth (almost three percent every year) in the 49 Least Developed Countries (LDCs), according to 2013 LDCs Report "Growth with Employment for Sustainable Development " launched by the UN  Conference on Trade and Development (UNCTAD).

By Lusha Chen
With opportunities and challenges brought on by rapid development in information and communication technology, it is estimated that more than 470 million jobs must be created between 2015 to 2030 to tackle the current financial crisis, and meet the needs of a growing population.

By Lusha Chen
March 27 officially declared the arrival of spring to the Hindu community, celebrated with the Holi festival. Known as the festival of colours, Holi has a broad appeal in and outside India, particularly among youth. Hindus send their greetings and welcome good luck by throwing coloured powder to others and smearing people's clothes with paint.

By Lusha Chen
On the sidelines of the 57th session of the Commission on the Status of Women (CSW), the United Nations Development Programme (UNDP) and the Huairou Commission (HC), on March 4th, organised a panel discussion on women's access to justice.
ADVERTISEMENT ADVERTISEMENT