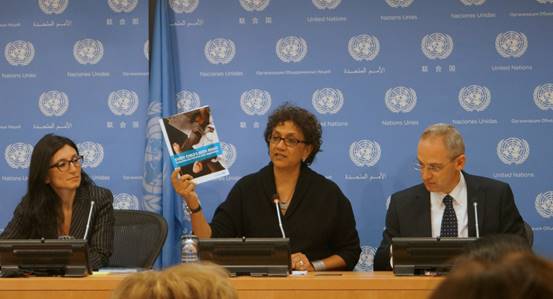 UNITED NATIONS, Dec 12 2013 (IPS) - On the 67th anniversary of the UN Children’s Fund (UNICEF) —   and in an effort to raise awareness around a growing problem– the organisation released a new report  on the inequalities of birth registration. It is estimated that one in three children under the age of five might lose the right to celebrate their own birthdays because their birth was not recorded—and nearly 230 million children under five have not been registered.

“Birth registration is more than just a right. It’s how societies first recognize and acknowledge a child’s identity and existence,” said Geeta Rao Gupta, UNICEF Deputy Executive Director. “Birth registration is also key to guaranteeing that children are not forgotten, denied their rights or hidden from the progress of their nations.”

The registration rates vary significantly across regions with the lowest found in South Asia and sub-Saharan Africa. Among the 161 countries that were analysed in 2012 the 10 countries with the lowest birth registration levels were Somalia (3%), Liberia (4%), Ethiopia (7%), Zambia (14%), Chad (16%), United Republic of Tanzania (16%), Yemen (17%), Guinea-Bissau (24%), Pakistan (27%) and Democratic Republic of the Congo (28%).  India had the most unregistered children in 2012—71 million are living anonymously.

According to the report, even when a child is registered this does not guarantee the accredited documents proving so—one in seven registered children do not have a valid birth certificate.

The implications of not registering a child go far and beyond just having accredited documents because the social, educational and developmental future of the new-born are dependent on a valid record of birth.

In Gambia, a father is primarily responsible for registering a child, and in Indonesia, a marriage certificate is a must for birth registration—which means that the children born to a single mother cannot hold the nationality of the country—a barrier to accessing education or any other social rights.

There are many additional factors that prohibit a child from being registered at birth, for instance, being unaware of relevant laws and processes, not understanding cultural barriers to facing social discrimination are just a few challenges new parents face.  Natural disasters and on-going conflicts also hinder registration because given each respective crisis, registering children is the last thing on a health workers mind.

In Chad, children from Muslim and Christian are more likely to be registered than religious minorities. The list goes on, warily hinting at the inequalities that both women and babies face after childbirth.

As time changes and more and more people are turning to technology, organizations like UNICEF are able to tackle birth registration in an efficient way.  By embracing innovative approaches that support governments and grassroots communities in simplifying birth registration process and data collection, slowly, children are being counted.

According to Gupta, “Societies will never be equitable and inclusive until all children are counted.” For the countries that have no data available or have issues registering children at birth, it’s the emphasis placed on technological support that really makes a difference, and which will eventually be one of the determining factors in a child’s future.