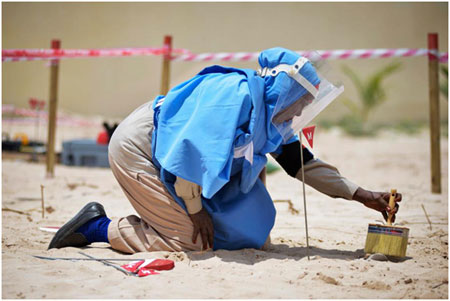 A female member of an Explosive Ordnance Disposal team brushes sand off a mortar shell during a demonstration held by UNMAS in Mogadishu, Somalia. Credit: UN Photo/Tobin Jones

UNITED NATIONS, Apr 4 2014 (IPS) - Poised on her knees, Betty Augustino is digging out the soil ,inch by inch, under a scorching 110 degree Fahrenheit temperature. She has a goal—to declare this part of South Sudan free of mines, so her brother can also play soccer in the safety of the field.

Augustino is a member of an all-female demining team in Yei, South Sudan.

So far, over 40 percent of the deminers employed by U.N. Mine Action Service (UNMAS) around the world are female. On the International Day of Mine Awareness Friday, the U.N. highlighted the key role of women in removing over 110 million active mines scattered across 70 countries.

“It is often said that women hold up half the sky,” said Secretary-General Ban Ki-moon in a statement released here. “Women worldwide are vital to our drive to clear landmines and protect against their indiscriminate effects, teaching people how to live safely in contaminated areas, assisting victims, clearing landmines and disposing of explosive ordnance.”

Every day, roughly 10 people are killed or maimed by landmines, UNMAS reports.

No election can take place when people are afraid to vote, no basic infrastructure like hospitals and schools can be built under dangerous conditions, and there can be no employment when companies are reluctant to hire local people, said Agnès Marcaillou, Director of the UNMAS.

“There is no peace building, no stability, no human rights, and no rights to move around without fear,” said Marcaillou, “There will be no peace process if half the population is not involved.”

Women’s participation in mine action entails more than removing landmines from the ground. They play significant roles in teaching local people how to avoid dangers in a mine-affected environment and in advocating for a mine-free world.

In countries like Colombia, one of the most mine-affected countries, with over 10,000 victims since 1990, landmines buried by both the government and non-state armed groups intensify the urgency to have a stronger demining sector.

Rossana Becerra, a Colombian evaluation Coordinator from the HALO Trust, a civilian demining organisation, explained how female deminers deal with daily pressures, “You have confidence in the process, that’s a safe process, you are trained, you have to do it step by step, in this way, you can manage the stress.”

To date, 161 states have signed the Ottawa Treaty (Anti-Personnel Mine Ban Convention), which aims at eliminating landmines around the world. However, 35 U.N. states, including Syria, Myanmar, Cuba, and North Korea, are non-signatories. Unless they become parties of the treaty, they won’t be able receive help from UNMAS.

“Governments should do more to address gender in their mine action programmes and through their implementation of the Anti-personnel Mine Ban Convention,” said Ban.