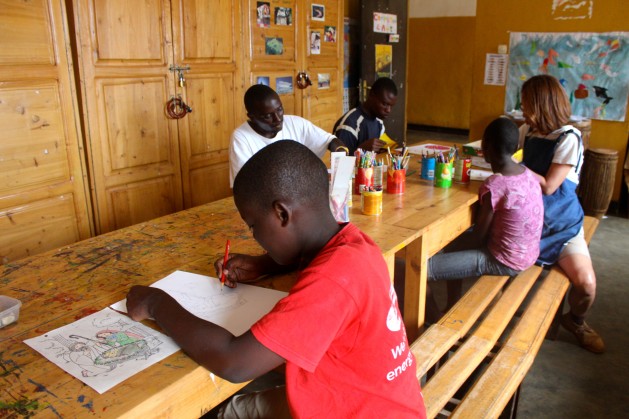 Deborah (in red), a 14-year-old Rwandan girl who lost her parents when she was young, at Gisimba Memorial Centre orphanage in Kigali. Credit: Amy Fallon/IPS

KIGALI, Jul 11 2014 (IPS) - Every day, 14-year-old Deborah wakes up in an orphanage, goes to school, and comes home to an orphanage. It does not matter when or for how long she leaves the orphanage, she always knows she’ll be back.

“This is where I live, this is my home,” says the teen, sitting at a wooden desk with other children at the Gisimba Memorial Centre orphanage. She has been intensely colouring in a nativity scene of one famous family – Mary, Joseph and baby Jesus.

Deborah had both her parents for only three years, before her mother died. Her father passed away two years later. Both had AIDS. Her four sisters and brothers also live at Gisimba Memorial Centre, in the Nyamirambo quarter of the Rwandan capital.

“Decades of research show that orphanages cannot provide the care children to develop to their full potential, leading to attachment disorders and developmental delays that can be physical, intellectual, communication, social and emotional” – communications consultant Annet Birungi

The original Gisimba orphanage was founded by Peter Gisimba and wife Dancilla, and began taking in children, orphaned through a variety of circumstances, in the 1980s. The couple died in the late 1980s. When the orphanage was renamed the Gisimba Memorial Centre in 1990, it was home to 50 children and had reached its capacity.

That was until the 1994 genocide when up to 700 people took shelter in Gisimba. “People were sleeping in the dormitories, outside, everywhere, as long as they were together,” coordinator Elie Munezero tells IPS.

Close to one million Tutsis and moderate Hutus were killed during those bloody 100 days.

Today there are about 125 young people living at the orphanage. “All generations,” explains 50-year-old Munezero. “Babies, infants, adolescents, young adults.” The youngest is two years old. The two eldest are 30. About 40 percent are aged under 16.

Deborah and the other siblings are just some of the estimated 2,171 children today languishing in 29 orphanages across the east African country, says Annet Birungi, a communications consultant for Rwanda’s National Commission for Children (NCC) and UNICEF.

Nine years in an orphanage, in Deborah’s case, does not shock Birungi. She points out the alarming results of the National Survey on Institutional Care, conducted in 2011-2012 by Rwanda’s Ministry of Gender and Family Promotion (MIGEPROF) and groundbreaking NGO Hopes and Homes for Children (HHC). It found thatabout 13.6 percent children living in institutions had been there for more than 15 years.

Staying in institutional care can scar children for a lifetime, with those aged between 0-3 years especially vulnerable.

“Decades of research show that orphanages cannot provide the care children to develop to their full potential, leading to attachment disorders and developmental delays that can be physical, intellectual, communication, social and emotional,” says Birungi, adding that “abuse, neglect, physical and sexual violence, isolation and marginalization are common in orphanages.”

Before colonial rule, there was a culture of treating “every child as your own”, notes Birungi. “Children were for the community and when a mother died, it was a responsibility of aunties and grandparents, family friends to take care of the orphan (s).”

The atrocities of 1994 are said to have left at least half a million children without parents. During and after the genocide,women informally took in children from the opposite ethnic group. Mothers were encouraged to be a “malayika mulinzi” (“guardian angel”). Systems of “kinship and foster care” operated, even if informally.

At the same, this was when most of the orphanages that exist today appeared but most of them lack exit plans for children who have grown up in them.

Meanwhile, the belief that children are better off in institutions than in families has also kept some children in care, says Birungi, and while there is no denying that some centres are able to provide shelter, food, clothing, health and education, they cannot offer the love of a family.

Today, there is no power and no water in Gisimba. Both have been cut off because the bills have remained unpaid, says Munezero. “Nothing is good,” he adds in despair.

A major issue with children being cared for in institutions is that some may still have living members of their family.  “You could be calling a child an orphan but he’s not,” Munezero admits.

The African Child Policy Forum (ACPF), an independent, not-for-profit, institution has reported that the majority of so-called “orphans” adopted from Africa by foreigners have at least one parent still alive.

International adoption was temporarily suspended by Rwanda in August 2010, to allow the country work on implementation of the 1993 Hague Convention on Protection of Children and Cooperation in Respect of Intercountry Adoption, which calls on states to consider national solutions before international adoption.

Birungi says the government wants to revive the culture of “treating every child as your own”. NCC is currently working with HHC to reintegrate those living at Gisimba back into families.

An NCC-trained psycho-social team is in the final stages of the reintegration process and Gisimba will be transformed into a primary school to benefit children in the surrounding area, according to Birungi. On July 10, HHC announced that the first of five children had been moved out of Home of Hope, another Kigali institution.

HHC’s country director in Rwanda, Claudine Nyinawagaga, says a number of alternative care services are available for children in the country, including “kinship care”, when a young person is placed with extended family, neighbours or friends.

But national adoption is yet to be fully implemented and since HCC started the closure of the first Rwandan institution in 2011, only one child has fully undergone the domestic adoption process. NCC-drafted guidelines on domestic and international adoption are awaiting approval by Rwanda’s Cabinet.

“Several meetings with local authorities revealed that the general population and local authorities do not have enough information about adoption,” Nyinawagaga tells IPS. “This is likely to be addressed through the approval of the adoption guidelines, and the sensitisation of the community.”

So, for the time being, Deborah remains in an institution.

“I like singing and drumming,” she says, when asked what she likes doing in her spare time. “We have a small choir that I’m in.”

Despite her plight, she is ambitious and looking forward to her future: “to work in an industry, and make fruit juice and yoghurt.”