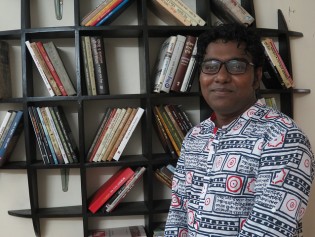 By Amy Fallon
Nearly two weeks after controversially winning a fifth term, it has emerged that Uganda’s President Yoweri Museveni has signed another repressive law which restricts the operations of thousands of NGOs working in the country.

By Amy Fallon
After escaping the genocide in Sudan’s Darfur region during which his father and two brothers were killed and his mother and sister displaced, Adam (named changed), began a new chapter. But it was a life “in limbo”. Over a decade later, he remains trapped in a strange country where he struggles to prove his identity; cannot find work or receive financial support.

By Amy Fallon
On October 2015, the day that Ugandan journalist Enoch Matovu, 25, was allegedly shot by the police for simply “doing my job”, the police had “run out of tear gas”, he claimed.

By Amy Fallon
Before she entered the Miss Uganda beauty contest, 24-year-old Fiona Nassaka was a farmer.

By Amy Fallon
The late Malian writer and ethnologist Amadou Hampâté Bâ said, “In Africa, when an old person dies, it is a library that burns”, so huge is the loss of oral stories and information. It’s a saying that rings true with the Acholi ethnic group, that was left devastated by the war in northern Uganda. “Our culture believes, when someone dies, there is a grave and it documents the loss. Now we need to look beyond the graves,” Acholi chief Rwoth Achoro says.

By Amy Fallon
When Gerald Abila received an iPhone as a gift almost two years ago, the Ugandan law student didn’t just use it to text his friends. He used it to create what would eventually become the first entity of its kind in East Africa — a tech savvy, multi-award winning, organisation that uses Facebook, Twitter, SMSes, and radio and television partnerships to provide free legal advice and consultations.

By Amy Fallon
Ugandan AIDS bodies and campaigners have warned that the “ugly clauses” of an HIV bill passed by Parliament late Tuesday, which includes the criminalisation of the “wilful and intentional” transmission of the disease, will see many in this East African country “shun the healthcare system”.