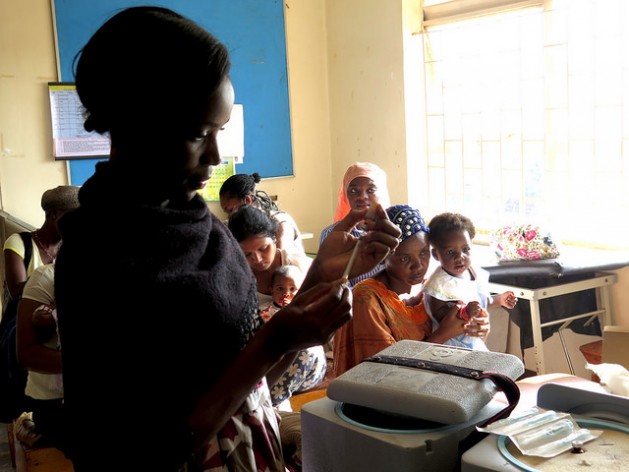 Women wait to immunize their children at the Kisugu Health Centre in Kampala, Uganda, where free vaccinations take place. The nurse in the foreground is Betty Makakeeto. Credit: Amy Fallon/IPS

KAMPALA, Jun 29 2016 (IPS) - Patience*, a Ugandan maid, planned on taking her three-year-old son for polio immunization during the country’s mass campaigns a year ago, until her landlord’s wife told her a shocking myth.

“The medicine they are injecting them with means the boy when he’s an adult won’t be able to reproduce,” Patience, 32, recalled to IPS what she’d been informed. “She said: ‘Don’t even think about immunization’.”

Patience said that in her neighborhood, the Kyebando slum in Kampala, many families “lied to medical personnel” because they were “terrified” about what this woman had told them.

Earlier this year, the country’s president signed the Immunization Act 2016, prescribing fines, a jail term of six months or both, for parents who don’t vaccinate their children in the age bracket of five days to one year old.

“They said the vaccines are made out of pigs, wild animals, (that) our children will behave like wild animals.” -- MP Huda Oleru

The Act also requires the production of an immunization card before admission to day care centres, pre-primary or primary education. It also aims to provide for compulsory immunization of women of reproductive age and other target groups against immunisable diseases.

According to the legislation, passed by Parliament last year, diseases for which immunization is compulsory include tuberculosis, whooping cough, tetanus, hepatitis B, polio and measles.

One in five African children still do not receive all of the most basic vaccines they need, including ones for three critical diseases—measles, rubella and neonatal tetanus – a report issued by WHO at the first ministerial on Immunization in Africa, held in Addis Ababa, Ethiopia, in February.

Uganda was ranked lowest in east Africa for immunization coverage, with one example being the country’s 2014 diphtheria-tetanus-pertussis (DTP3) coverage which was at 78 percent compared to DRC (80 percent) Kenya (81 percent), Tanzania (97 percent) and Rwanda (99 percent).

According to outgoing female MP Huda Oleru, who tabled the private member’s bill in 2011, the biggest obstacle to vaccination in Uganda was the 666 cult made up of more 500 members but “growing” across the country, who refuse to immunize their children.

“They said the vaccines are made out of pigs, wild animals, (that) our children will behave like wild animals,” Oleru told IPS.

Oleru is continuing talks with the groups in eastern Uganda, and said she hoped “in the long-term” they would come around.

But for now the law was the “easiest way” of getting them to immunize their children.

“When I entered Parliament (ten years ago), I realised that we didn’t have an immunisation law, and a law is guidance or directive and it guides us in areas of impunity,” said Oleru.

At least ten members of a Christian group were detained over refusing to vaccinate their children against polio, the Daily Monitor reported last month.

Dr. Henry Luzze, the deputy program manager of the Uganda National Expanded Programme on Immunization, told IPS the government was currently vaccinating against ten diseases. It had submitted an application to GAVI ((the Vaccine Alliance) and received approval to introduce the rotavirus vaccine for diarrhea in children, a “big problem”. They were also looking at introducing a rubella vaccine by 2018 and a second measles vaccination to be given at 18 months.

Measles were still a huge threat, after outbreaks last year in western Uganda, he said.

“We still have some districts and communities that are still below what we want in terms of coverage in the eastern part of the country, areas where there are very high hills and no transport,” said Dr Luze.

Children were also not being vaccinated due to shortages in a number of facilities at a district level, but through recent support from GAVI, Uganda was able to procure solar powered fridges to keep the vaccines in areas prone to power cuts.

The influx of refugees from Burundi, DRC and South Sudan, where immunization rates are low, pose another challenge to Uganda. Late last month at least three cases of yellow fever were confirmed here, with scores of cases suspected.

According to the new Act, “the government shall provide free vaccines and other related services to every Ugandan required to receive vaccination”.

Dr Luzze said the law was good as it was balanced and compels the government to “make sure all the vaccination services are in place”.

“After that, then you commit the parents or the caretakers to make sure all their children are vaccinated,” said Dr Luzze, claiming the legislation “empowers CSOs to challenge the government”, who could be taken to court over shortages.

But there has already been some criticism from Ugandans that the law is too harsh, and during a recent mass polio campaign, held in March, there were reports that about 2,000 children below the age of five missed out on immunizations in Karamoja, northeastern Uganda, according to the country’s Daily Monitor newspaper.

The Act also creates the establishment of an Immunization Fund, house by the ministry of health, to “purchase vaccines and related supplies, cold chains, and funding of immunization outreach activities”.

Sources will be made of up monies appropriate by Parliament for the fund and donations.

“GAVI has been supporting this country so much and they’re still giving, but the challenge is GAVI has its criteria,” said Oleru. “Soon we might become a middle-income country, then we shall not be eligible (for support) under GAVI.”

Luzze said he believed the law would be easy to enforce because “the president, the ministers, the parliamentarians, religious leaders” all supported it.

President Yoweri Museveni was “aggressive” about promoting immunization because he believes it saves “families from spending too much money and time caring for sick members”, among other reasons, said his spokesperson Lindah Nabusayi.

Dr Moses Byaruhanga, the director of medical and health services for Uganda’s police, told IPS the authorities would go on radio talk shows to talk about the law, but would be strict on it.

“Police will be able to find out if (parents) did not take their kids for immunization,” he said, adding health workers, local leaders and schools would be the eyes and ears of the community.

International immunization experts such as Mike McQuestion, director of sustainable immunization financing at Sabin Vaccine Institute in the US, have praised the new legislation as a “textbook example of good governance”.

“The way the Ugandans created this law was itself impressive,” he told IPS. “Several public institutions had to work together to write it, vet it and push it through.”

In late March, about two weeks after it emerged the law had passed, Patience had her son immunized against polio, during a door-to-door mass campaign.

“It was very easy, they just put a drop in the mouth, then a mark on the finger,” she said, adding it took only three minutes.

Patience admitted she had been “partly” worried about going to jail under the new law, and that was the reason she’d chosen to vaccinate her son. But she said the nurse had told her “you shouldn’t not vaccinate him because you’ll be arrested, but because he can get sick”.

“I think now he is free from becoming sick,” said Patience.