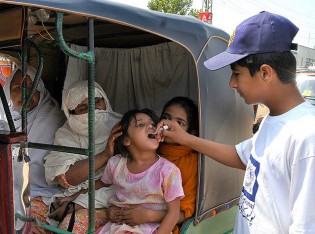 By Zofeen Ebrahim
It came as no surprise to Dr Zulfikar Ahmad Bhutta, a leading child expert at the Aga Khan University in Karachi, that an outbreak of measles has claimed the lives of more than 300 children in Pakistan. "The tragedy was in the offing," he said, putting the blame squarely on the abysmally low coverage of routine immunisation against childhood diseases.

By Siddharth Chatterjee and Dr. Sam Agbo
It was early July 2004, and Darfur was looking like a war zone - massive human displacements of an estimated one million people, ongoing skirmishes, inclement weather, a parched landscape due to the recurring droughts, and sheer misery everywhere.
ADVERTISEMENT ADVERTISEMENT