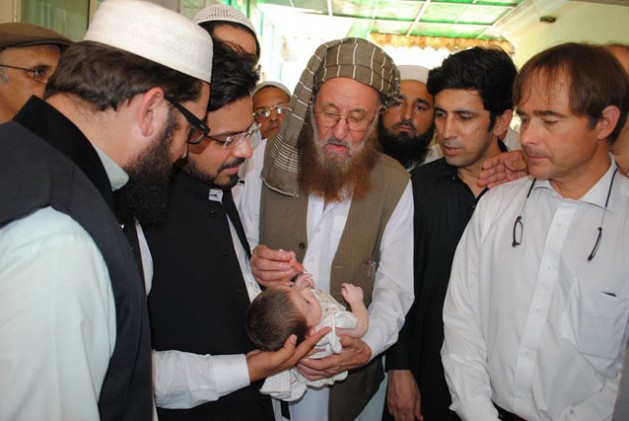 The two neighbouring countries — sharing a 2,400 kms long and porous border — have been bracketed as the stumbling block in the way of the global polio eradication drive. These militancy-riddled countries have been tackling Taliban’s opposition to the administration of oral polio vaccine (OPV) to children.

Peshawar, the capital of Khyber Pakhtunkhwa (KP), one of Pakistan’s four provinces along with the adjacent Federally Administered Tribal Areas (Fata) and the adjoining Nangarhar province of Afghanistan has been declared a polio-endemic geographical block by the World Health Organisation.

Since January 2016, “we have started synchronised immunisation campaigns in KP, Fata and Afghanistan with a view to ensure vaccination of all children on both sides of the border”, KP’s health minister Shahram Tarakai told IPS.

“There are about 100,000 children who refuse vaccination on both sides of the border. They pose a threat to the polio eradication campaign. Each child should get vaccinated,” he said.

The government has enlisted support of religious scholars to do away with refusals against OPV, KP’s top polio officer Dr Ayub Roz told IPS.

Taliban have been campaigning against OPV because they consider it a ploy by the US to render recipients impotent, infertile and reduce the population of Muslims.

Ayub Roz says that top religious scholars have been involved in the vaccination campaigns to dispel the impression being created that OPV was against Islam and that it affected the capacity of people to produce children.

Maulana Samiul Haq, chief of famous Darul Uloom Haqqani, who has been tasked to counter Taliban’s anti-vaccine campaign told IPS that the religious scholars have been engaged to accompany the health workers and urge the parents that OPV was important for their kids to safeguard them against disabilities.

“It is the responsibility of the parents to protect their children against diseases and provide them with safe and healthy environments. We have convinced 10,000 parents since January on vaccination of their children,” he said.

Muhammad Rizwan, a resident of Nowshera, one of the 26 districts of KP, says that he had not been vaccinating his children so far under the misconception that it wasn’t allowed in Islam. “As a result, my eldest son, aged four years was diagnosed positive for polio. Now, upon the persuasion of religious leaders, I have been vaccinating my two other sons to let them grow healthy,” Rizwan, a farmer, said.

According to him, Taliban have been warning the people against polio vaccination in the areas but the local clerics have started to woo parents on vaccination. “Parents are responding to religious leaders and are bringing their children for immunisation in droves,” he says.

KP police chief Nasir Khan Durrani says they have been deploying more than 10,000 policemen for the security of health workers.

“Militants have killed 70 health workers during polio campaign from 2012 to 2015 but there were no such incidents in 2016,” he says. Taliban militants want vaccinators to stay away from polio vaccination but we have given them foolproof security, Durrani says.

A new case reported from Afghanistan in February from Kunar province bordering Fata and KP Pakistan has triggered alarm bells, prompting both countries to speed up the immunisation drive in border areas.

More than 60 polio cases reported in 2015 belonged to Pakistan and Afghanistan.

Peshawar, capital of KP, registered 10 polio cases of KP’s total 18 in 2015 mainly because of free and unchecked movements of children from Afghanistan as well as Fata where quality vaccination was needed. Two of these polio cases had proven linkages to the virus in Afghanistan.

“The number cases in Pakistan were six and one in Afghanistan as of March 16 2016 because 14 vaccination points on the border has improved vaccination,” he says. Special focus is being laid on strengthening border vaccination.

The quality of vaccination at Torkham, the main border point crossed by hundreds of children per day, wasn’t up to the desired level last year due to which infected children transported the virus across the border, they said.

Ahmed Barakzai, a polio officer in Afghanistan’s Nangrahar province near the border, says the situation with regard to vaccination has shown signs of improvement due to the advocacy campaigns launched with support of community elders and religious leaders.

Like KP and Fata, we have also engaged police and religious scholars in the campaign. “In some areas, we have been facing security problems because the vaccinators were sacred of militants but we are using religious leaders to cope with the situation,” he says.

Saira Afzal Tarar says the synchronised campaigns have proved fruitful. “We are going to further strengthen vaccination in border areas,” she said.

Pakistan is home to at least 6 million Afghan refugees … In the past, Afghan children transported virus to Pakistan because of lack of vaccination back home, she says.

Now, every child is getting OPV at the border points due to which the chances of infection to local children have decreased, she says.