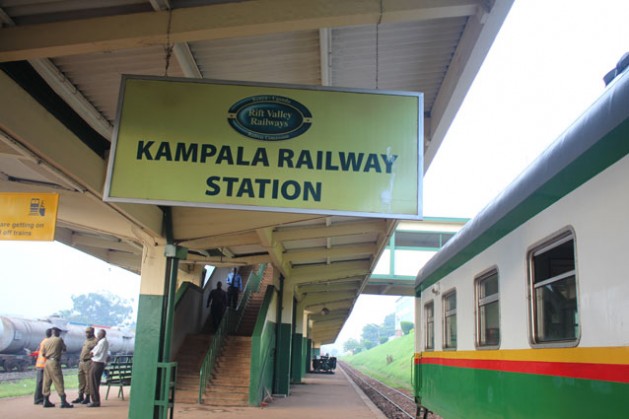 All Aboard! The once deserted station in Kampala now opens its doors. Credit: Amy Fallon/IPS

KAMPALA, Uganda, Jan 6 2016 (IPS) - Denis, a 38-year-old Ugandan bank worker, usually takes a packed minibus known as a matatu to and from his day job through the capital Kampala’s notorious potholed and gridlocked roads. But two weeks ago, he tried a new option: the city’s passenger train, relaunched for the first time in two decades.

“It’s safe, it’s better than the road and I think it’s affordable,” said Denis, smartly dressed in a suit as he disembarked at Kampala’s Main Railway Station after travelling from Namboole, an approximate 40-minute journey and some 10 kilometers (six miles) outside the city, and made his way to the central business district.

It was the third day into the train’s revamp, a partnership between Uganda Railways Corporation (URC), Kampala Capital City Authority (KCCA), and Rift Valley Railways (RVR) “for the benefit of the residents of Kampala,” according to RVR.

East Africa is known for rail lines such as the famous “Lunatic Express,” which runs overnight between Nairobi and Mombasa in Kenya, with an overnight service running to Kisumu on Lake Victoria, and the much troubled 1,860-kilometre (1,160 mile) Tanzania-Zambia Railway Authority (TAZARA), which when built in the 1970s was the largest single foreign-aid project undertaken by China. But Africa as a “whole has yet to exploit the full potential rail transportation offers,” Kenya-based Sammy Gachuhi, the general concession, manager and spokesperson at RVR, told IPS.

“Africa has less than 7 per cent of the world’s total number of railway tracks constructed and in use, of that number a quarter is to be found in South Africa,” he said.

Yet Gachuhi pointed to the importance of rail on the continent given “the African road network is very poorly maintained, which means trucks are limited regarding weights they can carry and places they can reach.”

“Africa is a continent where the majority of goods being transported are heavy raw materials, only rail has the capacity carry such loads,” he said.

Besides being more affordable over longer distances, congestion on Kampala’s roads, particularly downtown, has been a problem for some time, leading to many to rely on boda bodas (motorbike taxis), which can snake quickly through the traffic but have been labelled “death on wheels.” According to the Ugandan Police Annual Crime and Traffic Road Safety Report 2013, there were 2,616 fatal crashes in Uganda involving all vehicles that year.

“We hope that the service will attract as many commuters as possible so as to decongest the city of road traffic which has become a major problem for the residents of the city,” said Gauchi.

One upon a time, when Uganda passenger services were operational, they would transport “cargo, cattle and passengers – school kids and businessmen” plus football match spectators, according to Stephen Wakasenza, the chief concession manager at (URC).

“A lot of people used the train for their daily lives, carrying their grain,” he recalled, adding it “made trade easy.” Some locals carried chickens and goats onboard, and there was a term for sleeping passengers – dyel unindo. At each station, food vendors would rush to the window, offering sugarcane, cassava, potatoes, groundnuts and fish, described Oyulu.

“The passenger trains to the western leg, that is from Kampala to Kasese, functioned for the most part of the 80s, then privatization hit home,” said Oyulu.

Passenger services worldwide are “costly as a public good so government halted the services,” said Wakasenza.

“Before this new arrangement, rail services were offered for freight only by Rift Valley Railway Uganda Limited (RVRU), under a 25 year concession that is currently in its eighth year.”

The new Kampala service, which was unveiled on December 7, will run between Kampala and four other stations, with four daily trips being offered from Monday to Friday. Each ticket, sold by URC, costs 1,500 shillings ($0.45) and takes about 40 minutes.

“During rush hour for the same distance that we are piloting, it may take one up to two hours while travelling by car,” said Wakasenza.

He hailed the project as “a social public good” because not only will it “bring down the cost of doing business, but adding it has already created 38 direct personnel jobs.

The passenger service will run as a pilot for one year.

“At the end of this period, we will have a lot more knowledge and statistics on how and when best to operate the service,” said Gauchi.

On the first day, Wakasenza said, there were “close to 100” passengers, which included some parents bringing their kids “for joy rides”.

“Given the potential it’s not good, because one coach (there’s five altogether) can take 200 people at a maximum,” he admitted. “So it’s something that has to be embraced with time… with more publicity and coordination with local authorities”.

On the evening two days later, when it was pouring rain, people were begging for more services and commuters had increased, Rosie Isone, from Uganda’s railway police, told IPS.

As for Denis, the verdict is still out on whether he will become a regular rail commuter.

“It’s very spacious and there’s no congestion,” he said, but added, “maybe the speed needs to improve.”

“I can’t commit myself because sometimes I’m required to be in the office by exactly 7.00 am, which means waking up very early and using a matatu, which is faster than the train,” he said.

“If management can bring in a train which is faster and can start transporting passengers by 5.00 am, and stops at 9.00 pm or beyond, then it will be my option.”

In mid-December, it was reported that China and Uganda had signed a 440 million dollar deal for a 240km light rail project between Kampala and neighbouring districts.

Gauchi said in comparison with its neighbours, Uganda was “pretty much at par” when it came to rail.

“Certainly Kenya edged a little ahead now that they have already started construction of the Standard Gauge Railway (SGR) from Mombasa to Nairobi,” he said.

“This is a regional project, however, which will eventually extend to Uganda where feasibility studies have already been completed.” The SGR, a reported $3.2 billion project, will link the country to South Sudan, Uganda’s largest trading partner.