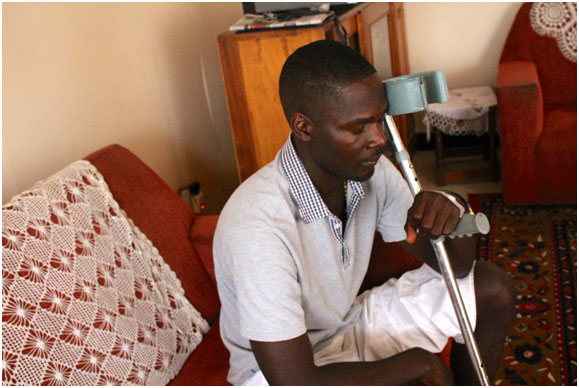 Ugandan journalist Andrew Lwanga, who is still recovering more than one year after allegedly being battered by a police commander while covering a protest. Credit: Amy Fallon/IPS

“So they had to use live bullets,” this journalist for broadcaster NTV Uganda told IPS. Matovu was injured in the head while covering the apparent vote rigging by contestants during the ruling party’s — National Resistance Movement (NRM) — elections in Mityana, central Uganda. “I only realised when I woke up in hospital what had happened,” he added.

Shockingly, since party elections in October, over 40 Ugandan journalists have been detained, beaten, had their tools and material taken, blocked from covering events and have lost employment, according to Robert Sempala, the National Coordinator for Human Rights Network for Journalists (HRNJ) Uganda. Two other journalists besides Matovu have allegedly been shot by the police.

Ahead of the February 18 elections, in which President Yoweri Museveni, 71, and already in power for 30 years, is standing, there’s a “likelihood” the press crackdown “is going to get worse”, said Sempala. “The contest is neck-to-neck,” he told IPS, adding there was “stiff competition” from the three-time presidential challenger Kizza Besigye and former Prime Minister, Amama Mbabazi. “According to our statistics, most of the victims have been those that cover either Besigye or Mbabazi, as opposed to the rest of the contestants,” he emphasised.

On January 20, Endigyito FM, a privately owned radio station in Mbarara, about 170 miles outside the capital Kampala, was shut down, purportedly over unpaid licence fees of $11,000. Mbabazi’s campaign team claimed that an interview with him two days earlier had been disrupted 20 minutes into the show, after officials from the Uganda Communications Commission stormed the building. The Committee to Protect Journalists (CPJ) and others have called for the broadcaster to be allowed to resume operations.

In a January report, Human Rights Watch (HRW) warned of a media clampdown, saying radio reporters working in local dialects with an audience in rural areas particularly faced intimidation and threats from government. “Looking over the last decade, its clear that violations of press freedom have clearly increased during elections and also during times of political tension in Kampala,” Maria Burnett, HRW senior researcher for Africa, told IPS.

“For journalists working outside Kampala, in local languages, my sense is that media freedom has been very difficult during political campaigns and elections in recent times,” she added. Burnett said in terms of what is happening outside Kampala, HRW’s research indicated that “the patterns are fairly similar” to the 2011 elections: “Perhaps the only real difference is that some radio journalists are more able to state the pressure they are under and the problems they face, either via social media or other media platforms as the Kampala-based media houses expand coverage country-wide.”

Sempala said “on the whole” there were more cases of violations against the press outside Kampala, according to HRNJ’s statistics. Most journalists attacked anywhere in Uganda claim it is hard to get justice. “Each morning I wonder what to do,” said Andrew Lwanga, 28, a cameraman with local WBS station, who was assaulted last year by the then Kampala district police commander Joram Mwesigye, leaving him with horrific injuries and unable to work. His equipment was also damaged.

“I loved covering the election so much. I would love to be out there,” he added. He is now fund-raising for a spinal operation in Spain — Ugandan doctors told him he had no option but to go abroad – and spends his days sitting in a lounge, watching his colleagues on the TV doing what he most wants to be doing.

Lwanga, a journalist of eight years, was injured while covering a small demonstration involving a group called the Unemployed Youths of Uganda in January 2015. Online, there is footage of Mwesigye assaulting Lwanga, of the cameraman falling down and then being led away by police, holding his head and crying in pain. “Now I can’t walk 50 metres without crutches,” said Lwanga, who has a visible scar on one side of his head and a bandage on one hand. “For the past 90 days I haven’t been able to sleep more than 40 minutes… All of this makes me cry,” he added.

More than a year after the assault, Lwanga’s case is dragging on. Mwesigye has been charged with three counts including assault and occasioning bodily harm, and suspended from his role. But at the last hearing, when Lwanga had to be carried into court by two others, it was revealed that the journalist’s damaged camera – an important exhibit – had disappeared and still hasn’t been found. “(The police) are trying to protect Joram, he wants to retain his job and he (has) always confronted me saying ‘you’re putting me out of work’,” said the cameraman.

Recently, Museveni pledged to financially help this journalist. But Lwanga said he hadn’t received any communication as yet when the money was coming. The last state witness in the trial was due to be heard on February 4 but has been adjourned to the 29th. Despite his ordeal, if he eventually has the operation and recovers, Lwanga said he will get back to work: “I miss my profession”.

Matovu is back at work, but still suffers a lot of headaches after his alleged attack, and admitted “sometimes I’m scared to do my job” “The police are not doing anything about this, only my bosses,” he said of his case.

Sempala said so far HRNJ had only managed to take “a few” cases involving journalists being assaulted to court. More advocacy is required to put pressure on police to investigate cases, he said. Burnett said it was “important that journalists who are physically attacked by police share their stories and push for justice”.

Police spokesperson Fred Enanga told IPS that Lwanga’s case was an “isolated” one, but the fact that police had “managed” to charge Mwesigye was “one very good example” that the authorities did not take human rights breaches against journalists lightly. “Over the years there’s been this very good working relationship with the media,” insisted Enanga.