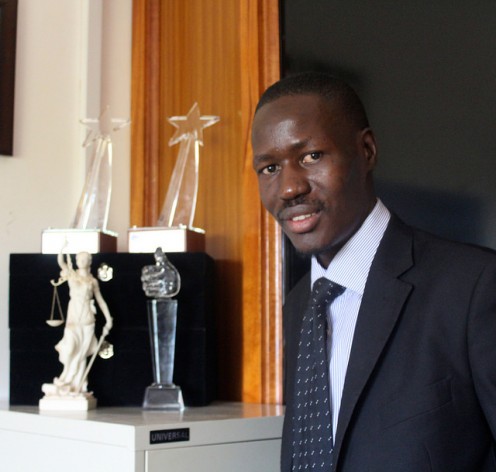 Ugandan lawyer Gerald Abila is the founder of the award-winning Barefoot Law, a tech-savvy non-profit that uses Facebook, Skype, Twitter, SMS, radio and television partnerships to improve access to justice and the law. Credit: Amy Fallon/IPS

KAMPALA, May 29 2014 (IPS) - When Gerald Abila received an iPhone as a gift almost two years ago, the Ugandan law student didn’t just use it to text his friends. He used it to create what would eventually become the first entity of its kind in East Africa — a tech savvy, multi-award winning, organisation that uses Facebook, Twitter, SMSes, and radio and television partnerships to provide free legal advice and consultations.

“I’d be in class but at the same time I was Tweeting and on Facebook,” the 31-year-old lawyer tells IPS. “So many legal questions would come up so I thought let me start a Facebook group. It was just me giving free advice.”

"The future of law is in IT, not law itself." -- Gerald Abila, Barefoot Law’s founder and managing director

Abila set up the Facebook group back in 2012 before he graduated from Kampala International University with his law degree. What began as a Facebook group with just 100 members, whom Abila helped every Saturday from 3 to 4pm, has now grown into Barefoot Law, a not-for-profit organisation with over 16,000 online followers and an Android app.

“I moved around the country and after that I decided to turn this into an organisation because access to legal services is a nightmare,” Abila, Barefoot Law’s founder and managing director, says.

“It’s like the health sector – you only go to a doctor when you start feeling sick. You only go to a lawyer when there’s an issue you go to court over.”

At the start, the Barefoot Law team worked remotely. Only four months later did they set up offices in Bukoto, Kampala.

Today the organisation has seven full time volunteers, including a tech person operating from Germany. They receive about 50 queries a day on a variety of issues via social media platforms, Skype, email, phone calls and SMSes.

Abila, who will speak at this week’s eLearning Africa 2014 International Conference on ICT for Development, Education and Training in Kampala, says at least 10 queries a day are employment-related. Most people simply want to find out their rights.

“Succession and property is also a very big issue,” says Abila, who injects a portion of his earnings from teaching and handling other legal cases into Barefoot Law.

“We educate and correspond. Every day we get an aspect of the law we think has been ignored, for example the land act which provides for rights of a squatter, and post about it on social media.” 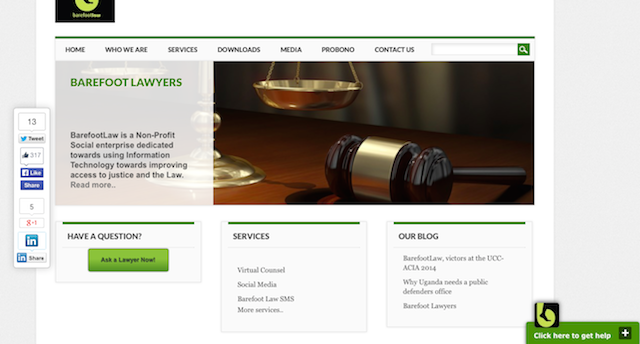 Barefoot Law provides free legal advice and consultations and has over 16,000 online followers and an Android app.

Lack of Knowledge About Legal Rights

Through no fault of their own, the majority of Ugandans are not aware of their legal rights. But the internet is a powerful tool.

News of the organisation’s good work has even spread to Kidepo, which lies on Uganda’s border with South Sudan. A man there discovered their services and travelled to Kampala to seek advice on a land conflict. His case was eventually sorted out through mediation.

Even people residing thousands of kilometres away in Somalia know about Barefoot Law.

Anthony Latim, 38, struggled to get his employer, an NGO, to give him worker’s compensation after he had a serious motorbike accident during work in 2010. He spent four months in a Ugandan hospital with a broken neck and urethra and he hasn’t worked since 2011.

Frustratingly, his case was delayed and then eventually withdrawn without his consent by his own legal representative. He lost hope until he asked his friends on Facebook if they knew of a reputable legal organisation that could help him.

Amazingly, an old friend from Uganda, who lives in Somalia and “who’s always on the internet” told him about Barefoot Law. Within a day Latim was informed he had a right to compensation and was put in touch with an organisation handling employment disputes.

“I’m very grateful that for the first time I was able to sit down with a lawyer in Uganda who did not ask me for any money,” Latim tells IPS.

Latim’s lawyers are now in the process of initiating mediation with his employers.

Abila believes that the only way for Uganda to achieve the United Nations Millennium Development Goals (MDGs) is for people to be sensitised  “on the rule of law, as once it’s violated nothing else can be achieved.”

Still many are ignorant of the country’s laws.

Uganda’s lawmakers passed 19 bills in the last parliament, between June 2013 and May 2014, says Irene Ikomu fromParliament Watch — an organisation that provides “virtual tracking” of parliament through live Tweets data and expert analysis and reviews.

These include the notorious Anti-Pornography Bill, approved by parliament just before Christmas. Earlier versions of the bill had sweeping definitions of “pornography” which mentioned the “sexual parts of a person such as breasts, thighs, buttocks or genitalia.” Uganda’s Minister for Ethics and Integrity Simon Lokodo warned women wearing miniskirts in public would be arrested.

Yet neither the bill or the final Anti-Pornography Act 2014, which President Yoweri Museveni assented to on Feb. 6, contained the word “miniskirt”. But this didn’t stop Lokodo and some local media having a field day with the supposed “miniskirt bill”.

Parliament Watch was the first to obtain and disseminate a final draft of the act.

In mid-February Barefoot Law began receiving up to 200 queries a day from people across the country, including a woman in Mbale, in eastern Uganda. She’d almost been stripped by a group of motorbike taxis and rowdy youth who said she was dressed in a miniskirt, which they claimed was unlawful. When she went to the police they did nothing.

“We’d received so many of those inquiries so we decided to share it,” says Abila.

Within an hour 7,000 people had reposted the Barefoot Law Facebook alert about the incident, with media houses and the police also picking up on it. People were informed of the reality of the law. 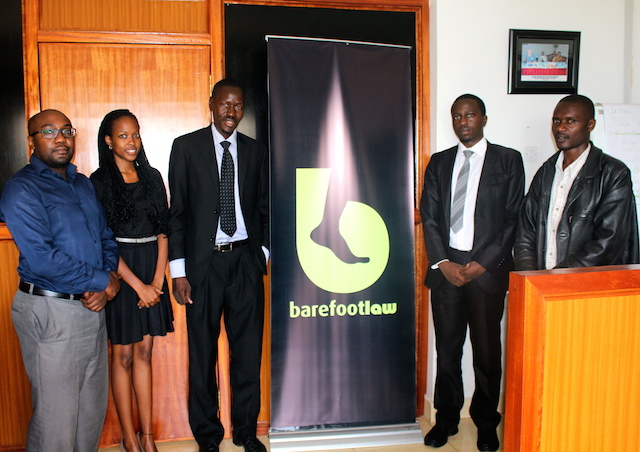 The Barefoot Law team receive about 50 queries a day via social media platforms, Skype, email, phone and SMS, mostly from people they never met in person, on a variety of issues. To the far right is client Anthony Latim. Credit: Amy Fallon/IPS

Reaching people in rural areas is a challenge but Barefoot Law have joined forces with Women of Uganda Network (WOUGNET), which has set up outreach centres across the country. Anyone needing legal advice can contact the facilities, some of which have internet access and can reach Abila’s team.

They also have a collaboration with the United Nations Children’s Fund, which involves uploading Barefoot Law content to a Uganda Content Portal, which makes the information accessible to kiosks in remote parts of the country.

“We have also partnered with radio stations in hard-to-reach areas. Stations simply calls us at a set time, and we offer free advice to the listeners who call in, or physically go to the station,” says Abila. He hopes to introduce toll-free phone lines and expand to Kenya in the future.

Ikomu and her team continue to live Tweet from Parliament and have posted every law passed since October online.

“When we started we didn’t have lot of money but we had Facebook and Twitter. Those are easy tools you can use to connect with people,” she says.

Abila believes that technology is the “silver bullet” that can be used to overcome legal challenges.

“I always tell my legal colleagues before you study a Masters do a course in something IT-related because the future of law is in IT, not law itself,” he says.