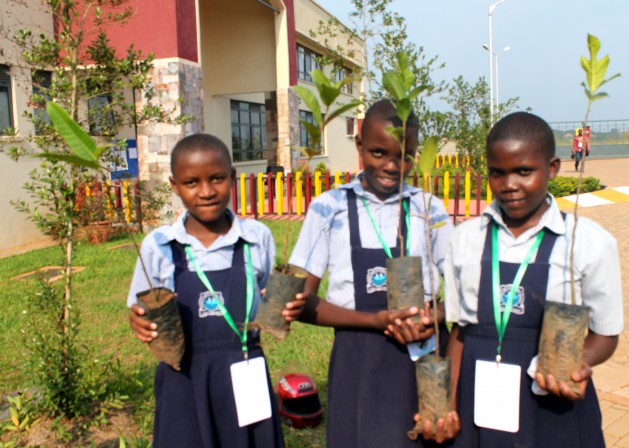 KAMPALA, Jul 15 2014 (IPS) - Olga Mugisa, 11-years-old, takes to the microphone in front of her peers, the Ugandan flag proudly draped behind her and green plants framing the stage. She has an important message to share with her fellow students: “If you cut one, plant two.”

“I tell all of you here you to plant trees at school, at home, everywhere,” she says in a loud and confident voice to participants at Africa’s first International Children’s Climate Change Conference held in the Ugandan capital at the weekend.

“If you plant those trees you will get air that you breathe in and (you) will breathe in oxygen as you produce carbon dioxide,” adds the Primary 5 student at Mirembe Junior, an international school in Namuwongo, traditionally a slum area of Kampala.

“Children are the future generation, but at the moment we are in this climate change quagmire because adults cut trees with impunity. We do not think twice … we didn’t plant them” – Joseph Masembe, founder of Uganda’s Little Green Hands

Students performed skits, sang and recited poems, as well as posing questions and giving PowerPoint presentations in their own style. Everything revolved around the causes and effects of, and solutions for, climate change.

According to The State of Uganda’s Population Report, released in February 2013, the east African nation has the world’s youngest population, with over 78 percent aged under 30.

“A wise man once told me a child’s mind is like wet cement -when you write on it, it’s permanent,” Masembe tells IPS. “So involving children at such a tender age in environment conservation means the future is ensured and it’s guaranteed.

“Children are the future generation, but at the moment we are in this climate change quagmire because adults cut trees with impunity. We do not think twice … we didn’t plant them.

“But if we get these children to start planting trees at a tender age, by the time they grow up they will have sentimental value attached to these trees, so they won’t chop them down,” Masembe explains.

It’s getting thumbs green that was the focus of the Little Hands Go Green Festival, an annual eventcreated by Masembe in 2012. In December that year, more than 16,000 children flocked to Kampala’s Kololo Airstrip, where they were given seedlings to take home and plant fruit trees. Masembe says “Africa’s only green festival” was even “gate-crashed” by Uganda’s President Yoweri Museveni, after he heard about the large gathering of children. Out of it, sprang the ICCCC.

As highlighted in the The State of Uganda’s Population Report2013, Uganda has been identified as one of the world’s least prepared and most vulnerable countries when it comes to the climate change. The study stressed that Global Climate Change models project the nation will experience an increase in average temperatures up by up to 1.5 oC in the next 20 years.

Hot days are increasing, cold days decreasing; glaciers on the Rwenzori Mountains are continuing to melt and almost all regions of the country are experiencing “intense, frequent and prolonged droughts,” the report said.

“You find that now the rains do not come as they used to come, the seasons are changing and it’s a lot hotter,” Masembe tells IPS. “The dry season takes a lot longer. Farmers are telling you their crops are being affected a lot. You have mudslides in Bududa (eastern Uganda) almost every other year.”

Despite her age, Olga is all too aware of the impact of climate change on her country, which she notes is called the “Pearl of Africa” but which, because of climate change, “will no longer be the Pearl of Africa. Lake Victoria and (Lake) Albert will dry up… climate (change) is something that can destroy a country.”

As she plants a tree at the end of the ICCCC, Olga says that she will encourage her mother, father and two siblings to do the same. “I’ll keep encouraging people to plant trees … They have a responsibility.”

Olga is fortunate that she attends an international school where the study of climate change is on the curriculum. “In the international schools they teach it, in the local schools, which is the majority, they don’t,” says Masembe. “So we have to find other ways to sneak it in, through extracurricular activities for instance.”

“The Green Festival (to be held on August 24) is one opportunity. And this conference, which will become annual, will become part of the way whereby children can use their voices and hopefully adults can start to listen.”