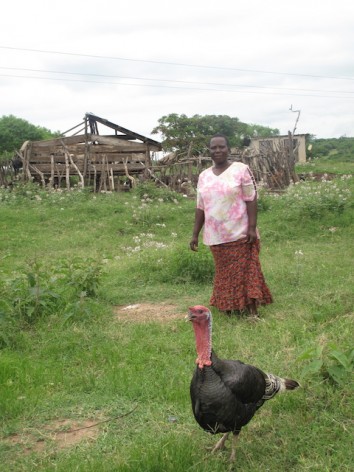 According to the State of Uganda Population Report 2013, four out of every five of Uganda’s 17.3 million women are employed in agriculture, the majority of whom work as subsistence farmers. Credit: Amy Fallon/IPS

“You grow your lettuce, you go and supply it to any market like Capital Shoppers [a Kampala supermarket] and you get your money at the end of the month,” says the young beauty queen who is also not afraid to get her hands dirty growing peppers and passion fruit, and through rearing pigs, rabbits and hens.

“As a young person getting your own cash from your own product, you become really proud of yourself,” she tells IPS.

Today the glamorous Ugandan woman is the reigning Miss Talent, having won that category of the national beauty competition ahead of the finals on Oct. 25. But Nassaka is first and foremost a farmer.

"Women are the ones who do the work and then the men take the output. I entered Miss Uganda to speak out about their rights.” -- Judith Acayo, 24, a records officer, poultry farmer and the current Miss Uganda Northern Region

Now she’s encouraging other young ladies to move into agriculture through this year’s contest, which has a new theme, “Promoting agriculture entrepreneurship among the youth”.

The 2014 Miss Uganda pageant is particularly trying to recruit women aged between 18 and 25 into farming. There’s also a new, unlikely sponsor: the Ugandan army.

According to the State of Uganda Population Report 2013, four out of every five of Uganda’s 17.3 million women are employed in agriculture, the majority of whom work as subsistence farmers.
But Nassaka says many young women turn up their noses at working in the sector, despite the fact that youth unemployment is said to be as high as 62 percent, according to “Lost Opportunity? Gaps in Youth Policy and Programming in Uganda” by ActionAid International.

“Women think agriculture is only for the older people, they think it’s not profitable,” Nassaka says. “But most of the rich people in the world are related to agriculture.”

“At the end of the day we’re going to fight poverty. We’re all going to be happy,” she adds.
The new direction for Miss Uganda has raised some eyebrows. But organisers insist it is all about encouraging young women to develop skills to take care of themselves and their families, boosting the economy, and of course, in pageant speak, “beauty with a purpose”.

Brenda Nanyonjo, the chief executive of Miss Uganda Ltd, says in the lead-up to the winner being crowned the 20 competition finalists will take part in a cattle and poultry farm boot camp and visit the marketplace to gain hands-on agricultural experience. Eventually, many could get good jobs in what is the biggest industry in Uganda.

“You feed the nation, you feed the community. You make a bigger difference than having a boutique,” Nanyonjo says.

“That’s why we chose the theme. To some people it was weird, funny, ‘it can’t happen’. But it’s going to happen because we are going to run this campaign for the rest of the year and it’s not a one-off campaign.” 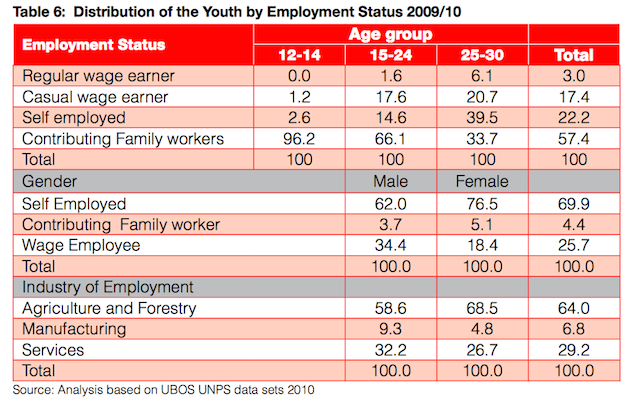 Dr Kihura Nkuba is the chief strategist at Operation Wealth Creation (OWC). It’s an initiative spearheaded by the army and tasked by the presidency to galvanise production in rural areas.
‘We can start industries, we can increase our foreign exchange revenue,” Nkuba said speaking the launch of the Miss Uganda contest on Monday, Sept. 15.

“We can become food secure. We can have seeds, we can grow our own food and have granaries and silos.”

OWC will fund Miss Uganda and four winners to market Uganda’s local produce within and outside Uganda for two years, he says.

Miss Uganda contestants could eventually market products the country is already producing, such as juice, cornflake and honey.

The competition organisers and sponsors aren’t the only people talking up agriculture.

“The ones living in the paradise called Uganda are having food shortages,” the country’s President Yoweri Museveni told 200 Ugandan students as they left for agricultural apprenticeships in Israel, the Daily Monitor newspaper reported over a week ago.

“People don’t know they can get money from agriculture. The problem is not skills but attitude.”
Nassaka says she was “so supportive” of her leader, because “agriculture is our backbone in Uganda”.

“So we need to go back to our roots and say what can we do best? Planting, rearing cattle. At the end of the day we are fed and hunger and poverty is eradicated.”
But those women already working in the sector struggle compared to their male counterparts, many point out.

Most engage in small-scale farming and business activities which earns little money, and few know the market dynamics of what they’re selling, often underpricing their produce, a “clear case of poor returns for the months of labour spent in the fields,” according to the State of Uganda Population Report.

Some women sell their produce and are then forced to surrender the money to their husbands, it says.

“They’re just in the background digging and growing the food crops, not going to the market to sell them,” Bridget Mugambe, a policy advocate from Alliance for Food Sovereignty in Africa (AFSA), tells IPS.

“The lucky ones will have maybe a few roadside stalls. But if you actually visited a lot of the rural gardens the women do a lot of farming. But for cash crops like maize and coffee, all that harvesting will be done by the men.”

Nancy Mugimba, the National Coordinator at Eastern and Southern Africa Small Scale Farmers’ Forum Uganda, tells IPS that she doesn’t think it’s women who have a negative attitude towards agriculture.

“It is not that they don’t want [to engage in the sector] but they’re dealing with issues of land ownership, how do I get access to products and resources, land, water?”

Mugambe says the questions needs be asked about how to “bring women to the forefront of the sector where they are the majority?”

This could also be where the 2014 Miss Uganda beauty contest comes in.

“Women are the ones who do the work and then the men take the output,” Judith Acayo, 24, a records officer, poultry farmer and the current Miss Uganda Northern Region, admits to IPS.

“I entered Miss Uganda to speak out about their rights.”

Edited by: Nalisha Adams
The writer can be contacted on Twitter @amyfallon