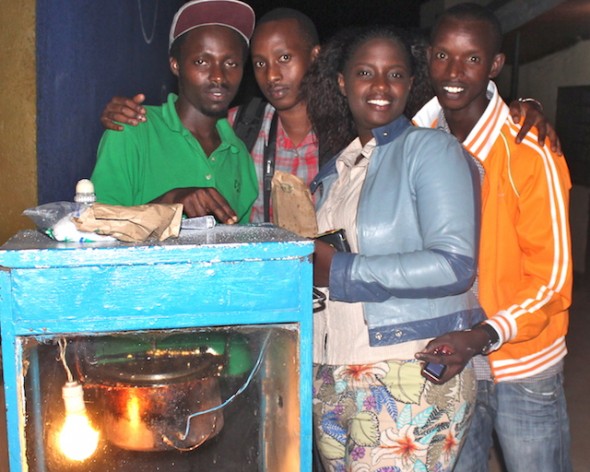 KIGALI, May 14 2014 (IPS) - Twenty-year-old Fabrice Shyaka sells popcorn in brown paper bags five nights a week from his stand in a small alleyway, situated next to a DVD shop blaring loud music, and a supermarket. Here in Kanombe, a suburb in the Rwandan capital of Kigali, he is the only person selling popcorn in the area.

Shyaka was able to get permission to set up his business on the side verandah of one of the local shops and his popcorn machine is easily visible and accessibly to pedestrians and shoppers.

“Popcorn was a new business in the country. We [Shyaka and other youth] thought there would be a market for it,” he says.

“Unemployment is a general problem in many developing countries but it has particular consequences for a post-genocide situation." -- NAR executive director Eric Mahoro

Shyaka was born in 1994, the year of the Rwandan genocide, in Uganda. His Rwandan parents had fled the country after the killings began during which an estimated that 800,000 minority Tutsis and moderate Hutus lost their lives.

His family later returned home and Shyaka is now a member of the Voice of Peace Association, a youth club working with Never Again Rwanda (NAR). NAR, a human rights and peace-building organisation founded in response to the genocide, is a platform for young people from different backgrounds to talk about the issues they face.

NAR funds six youth-initiated projects that positively contribute to the community. They aim to educate young people with the leadership skills they need for identifying, developing, and implementing a project.

Besides receiving training and on-going technical support, NAR youth members can apply for project seed money to help them start their businesses. Two years ago, with NAR’s support, Shyaka and a few other young people began to make and sell popcorn.

“I was unemployed until I started selling popcorn. I now make a profit of at least 2,000 Rwandan Francs [three dollars] a day.”

He says selling the popcorn has helped him to earn money on a daily basis. However, it is just enough to cater for his basic needs.

Richard Manzi, a social economic development programme intern with NAR, tells IPS that the popcorn business here is taking off.

”The number of the customers keeps improving. People are getting more interested in popcorn as they walk across the streets of Kigali, where it is now commonly sold. This is unlike two years ago when it had just been discovered by a small number of people in the country,” he says.

“On the weekend a big number of people usually take evening walks and end up buying popcorn.”

According to 2014 statistics from the National Employment Programme (NEP) for Rwanda, about 77 percent or five million of the working population, aged 16 and over, are farm and informal sector workers.

Many of these workers are engaged in extremely low productivity activities that generate low earnings, making them underemployed.

Only about seven percent of the entire workforce here have stable jobs. And of the country’s unemployed, some 67 percent are youth.  According to a World Bank report entitled “Rwanda: Rebuilding an Equitable Society – Poverty Reduction After the Genocide”, of  the country’s 11.5 million people, 53 percent live below the poverty line. 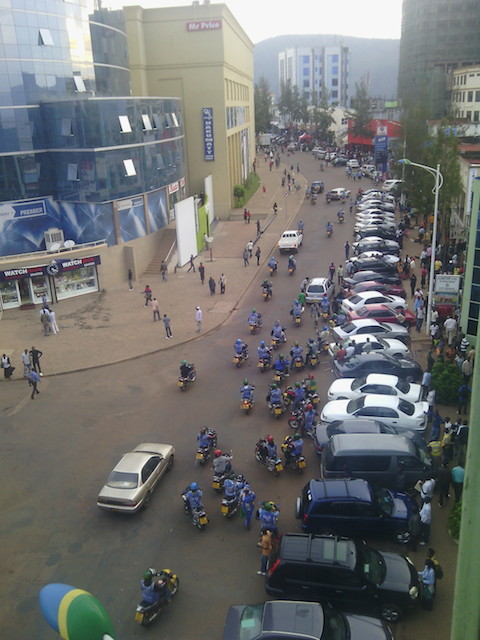 “Unemployment is a general problem in many developing countries but it has particular consequences for a post-genocide situation. That’s why we’re especially focused on it,” he tells IPS.

NAR says it is engaged with over 97 clubs and associations made of up youth in and outside Rwanda, reaching over 7,000 Rwandan youth.

“You have a lot of orphans who are helpless and schooling is particularly very difficult for them.

“You have a number of youth who are traumatised and are looking back on their past experience, which might affect the way they look at employment.”

Bosco Bahati, 23, is one of those young people still affected by the trauma of his past.

Bahati weaves thin wool wristbands, in the back garden of the brick house that he shares with three other people, as chickens opposite him stand in mud puddles. One, in black, white, red and blue bears the initials RFP, in reference to Rwanda’s ruling party, the Rwandan Patriotic Front. Another says Liverpool, referring to the English football team.

“It takes me two hours to make them,” Bahati tells IPS, through a translator in the local Kinyarwanda language, about the wristbands which have different embroidered writing on them.

“After making them I try to find someone who likes them,” says Bahati who earns between 300 and 500 Rwandan francs (less than one dollar) for each bracelet.

Unlike Shyaka he has no set place to market his wares. Making these bracelets is the only thing he can do to earn a little bit of money.

Even now he’s lucky if he sells even a few bracelets a day to go towards paying his rent. Each month he pays 4,333 Rwandan francs (6.35 dollars) to rent a room with a mattress here.

After losing his parents in Rwanda’s 1994 genocide when he was just four-years-old, Bahati escaped with his older sister to neighbouring Burundi, where they stayed with relatives.

Two years later his sister became ill and died. When Bahati’s family, who were poor and couldn’t afford his school fees, started mistreating him, he fled. In 2004, aged just 14, he crossed the Burundi-Rwanda border on foot and reached Nyamata, a town in eastern Rwanda. From there he hitchhiked to the capital.

With no highschool education and no family, life has left Bahati behind.

“If god wishes, I will go back to school and study like others and learn English, so I can have some hope for my life.”

He joined World Mission, a club affiliated with NAR. While NAR only supports the club, Bahati has not applied for funding from them for his business efforts.

Bahati “lives [in poverty] because of the genocide,” Grace Usanase from NAR tells IPS. His life, Usanase says, is a reflection of what the life of genocide survivors is often like.

It’s also a life filled with uncertainty. “I don’t know what I’m going to do in the future,” Bahati says.