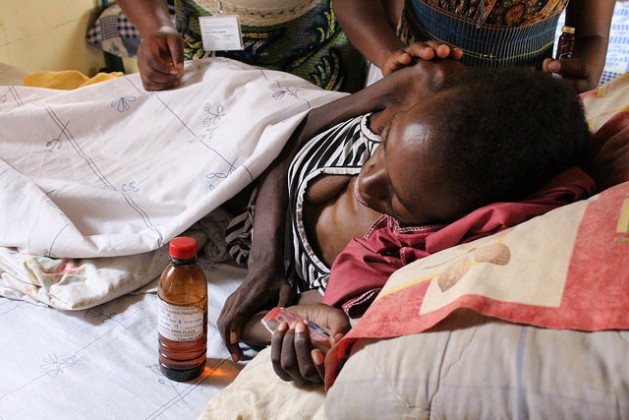 Jovia, who died on Apr. 29, 2016, suffered from both HIV/AIDS and cervical cancer, a deadly combination affecting thousands of women in Uganda. Credit: Amy Fallon/IPS

KAMPALA, Uganda, Jul 25 2016 (IPS) - Lying on a dirty bed in a crowded, squalid hostel in Kampala, emaciated Jovia, 29, managed a weak smile as a doctor delivered her a small green bottle containing a liquid.

“I’m so happy they’ve brought the morphine,” the mother told IPS, just about the only words she could get out during what would be the last weeks of her life. “It controls my pain and makes my life more bearable.”

“As long as radiotherapy is not available in Uganda many more patients will die.” -- Dr. Anne Merriman

Jovia was suffering from both HIV/AIDS and cervical cancer, a deadly combination affecting thousands of women in Uganda. While the east African country had huge success in the battle against the HIV virus in the 1990s, cervical and other cancers are the new health crises gripping the developing nation. One in 500 Ugandans suffers from cancer. But only five per cent of patients will get any form of treatment, facing an often tortuous death.

Thanks to Hospice Africa Uganda (HAU), founded 23 years ago by the 2014 Nobel Peace Prize Nominee, British-born Dr. Anne Merriman, patients like Jovia are given not only affordable pain-controlling oral liquid morphine, but comfort, hope and dignity in their last days.

At 81, Dr. Merriman is credited with introducing palliative care to Africa. HAU has cared for a total of 27,000 seriously ill and dying people since 1993, the vast majority with the morphine made at its Kampala headquarters for just two dollars a bottle, with government funding.

In Uganda, cancer is usually diagnosed quite late, due to poor screening and lack of health services. According to the country’s Uganda Cancer Institute (UCI), 80 per cent of sufferers die because of late diagnosis.

For patients like Jovia, who passed away peacefully on Apr. 29, leaving a daughter, 14, radiotherapy can cure or extend life when treated in early stages. 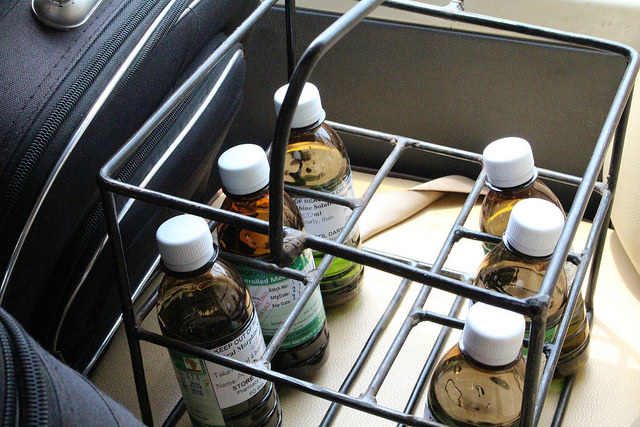 But in early April, Uganda’s only radiotherapy machine broke beyond repair. It was used by about 30,000 cancer patients annually. Since then, thousands in need of radiotherapy to cure their cancer, or extend their lives, have been left without vital treatment.

The Ugandan government had purchased a new machine, worth a reported 500,000 dollars, three years ago, but it could not be delivered as special bunkers needed to house the machine had to be built.

Facing an uproar from within Uganda at the lack of radiotherapy services, the government promised a new bunker would be built within six months. Aga Khan University Hospital in Nairobi, Kenya, offered free treatment for 400 Ugandan cancer patients. The plan was that they would be sent there by the Ugandan government through the UCI.

But more than three months later there is still huge confusion and contradictory reports and statements about the delivery of this promise, and controversy over the delay in getting desperate patients. Despite repeated requests for clarification the UCI nor Uganda’s ministry of health are able to state exactly how many patients – if indeed any – have yet been sent to Kenya for treatment.

Christine Namulindwa, UCI’s public relations officer, pointed out patients going to Nairobi have to go through an “evaluation”, and be approved by a board.

“So far we’ve submitted 15 names to the ministry of health and more are yet to be submitted,” she said last month. The pledge for free treatment from Aga Khan did not cover the cost of transporting patients and upkeep while in Nairobi, she said.

She said there were “patients who are still waiting” and referred IPS to the health ministry for further questions.

On July 1, Professor Anthony Mbonye, Acting Director General of Health services, told IPS via email the ministry of health had “received a budget for supporting patients to Aga Khan and will provide transport and funds for maintenance”.

A lawyer had “cleared a memorandum of understanding between Aga Khan and UCI,” he said.

“The radiotherapy machine was bought, but the bunker is yet to be rehabilitated. In two months’ time the machine will be installed and services will resume.”

Stories in East African papers in early July reported that the “long wait” was “over” for patients, after Aga Khan signed an MOU with UCI, allowing 400 out of 17,000 patients to “receive treatment”. But they did not give a date for when they would go to Kenya.

Another report said only tumour patients with chances of survival, but including those suffering breast and cervical cancer, would be transported to Kenya using government vans. It said accommodation and other support services were being organised by Uganda’s High Commission in Nairobi, and 20 patients have been approved to go. But again it gave no specific date for their transportation.

Two of seven patients have been treated at Aga Khan not through the UCI and the Ugandan government, but through a partnership with HAU and Road to Care, a programme developed by Canadian doctor Joda Kuk. He set up scheme in 2011 after he witnessed women with cervical cancer in rural areas of Uganda needing desperate assistance to get to Kampala for radiotherapy.

Mary Birungi and Mary Gahoire, a mother of three, both from western Uganda, returned home the week of July 21 after travelling to Kenya by road, being housed by Road to Care and completing radiotherapy treatment there. They are now back with their families.

Two more patients are in the middle of treatment this week and and two more will travel to Kenya. The seventh patient is due to go there in the first week of August.

Dr. Anne Merriman pleaded with the Ugandan government to do all in its power to complete the building of the new bunkers so the new radiotherapy machine can be commissioned as soon as possible.

“We are so happy that under Road to Care seven of our patients will be treated in Kenya, but this is just a drop in the ocean,” she said. “The need is huge. There has been so much confusion since the machine broke down, causing huge stress to patients and families. “

“As long as radiotherapy is not available in Uganda many more patients will die.”

On July 23, Professor Mbyonye told IPS that “some” patients have gone to Kenya and had already come back through the agreement between the health ministry and Aga Khan, but couldn’t give more details.

For many though, it’s too late.

Vesta Kefeza, 49, a mother of seven, has advanced cervical cancer. Lying on a mattress on the ground of her one-room home in Namugongo slum, Kampala, she is immobile, as her leg has ballooned due to a complication from the cancer.

She has been on HAU’s programme since 2011 and is administered morphine by their nurses. Uganda became the first country in the world to allow nurses to prescribe the drug in 2004. The hospice team also provides food and spiritual support.

In June, thanks to a donation from Ireland, Kefeza received a wheelchair, allowing her to get out into the fresh air and go to church.

“Until then I lay in bed all day,” she said. “I thank God for my blessings. I am lucky to have HAU caring for me.”