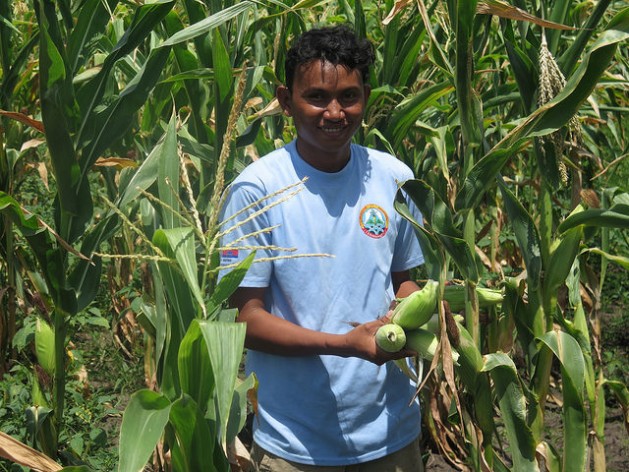 Phal Vannak, a farmer from Amlaing commune in Cambodia, who has benefitted from the rehabilitation of a water irrigation scheme by FAO. Credit: Amy Fallon/IPS

KAMPONG SPEU PROVINCE, Sep 26 2016 (IPS) - In Kampong Speu province, when the wet weather doesn’t come, as in other parts of Cambodia, it can affect whether food goes on the dinner table.

“When there’s drought, it strongly affects crop production,” Vann Khen, 48, a married father of three from Amlaing commune, who farms corn for his family’s consumption, and rice, cattle, pigs, chickens and ducks to sell, told IPS.

Tens of thousands of households are thought to be affected by drought every year, with "millions" spent saving lives and recovering livelihoods, according to FAO Cambodia.

What has been worsening the situation for farmers in Kampong Speu, some 40 miles west of the country’s capital Phnom Penh and with a population of at least 700,000, was that a 770-metre water canal, made during the reign of dictator Pol Pot, needed urgent restoration, so when it did rain farmers could access water.

In each irrigation scheme, a command area normally allows all farmers access to water. But in many instances lack of maintenance, destruction due to floods or animals, and culverts or other gates not working properly can prevent farmers from accessing water, stress officials with FAO Cambodia.

In other cases, if the irrigation scheme is not built correctly or if there is ineffective land levelling, the water won’t flow. Those not having water access, in both cases, rely mainly on rain patterns. During long dry spells and drought, they suffer more than farmers who have access to irrigation water.

“Last year wasn’t a good harvest, I got only about 500 dollars in total,” Phal Vannak, 28, a married father of three, who mainly farms corn and rice, told IPS.

For corn alone, he earned only about 100 dollars due to the delay in rainfall.

Kampong Speu has been on the other end of extreme weather, suffering from floods and storms.

“In 2015 and 2016, as in other countries, Cambodia has been hit by El Nino, affecting crop production,” Proyuth Ly, from FAO Cambodia, told IPS.

The dry periods are the “most prominent hazard” threatening the agriculture sector in Kampong Speu, says FAO Cambodia. The industry is one of the sectors most impacted by drought, and smallholder farmers particularly suffer. Tens of thousands of households are thought to be affected by drought every year, with “millions” spent saving lives and recovering livelihoods, according to FAO Cambodia.

Vannak is the president of a Farmer Water User Group (FWUG) for the Kampong Speu irrigation scheme.

There are 500 households from six villages who are members.  To effectively manage water use, they established six sub-committees (one for each village), and a sub-committee of between four to eight people.

“The farmers weren’t happy (last year) because they needed the water to get into the rice field,” said Vannak.

After a request for help from Cambodia’s ministry of Agriculture, Forestry and Fisheries, FAO Cambodia, with funding from the European Commission’s Humanitarian Aid and Civil Protection (DIPECHO), rehabilitated the canal.

“Livelihoods would be affected as they could not grow intended crops,” Etienne Careme, in charge of operations at FAO Cambodia, told IPS. “FAO Cambodia rehabilitated the canal to ensure correct flow of water to needy farmers. It meant rehabilitating canal corridor, strengthening slopes, constructing or rehabilitating culverts.”

The irrigation scheme is connected from a stream located about 20 miles from the Aoral mountain, the main source, and can supply water to 400 ha of paddy fields.

“This water has really saved this rice crop,” said Ly on a recent field trip to Kampong Speu to monitor the irrigation scheme and the farmer’s needs, trips conducted regularly, as water rushed past him.

Vannak said this season’s harvest was already an improvement on last year.

“When I heard this (canal) was being fixed I was very happy because some people didn’t have water to save their crops,” he said, clutching a handful of corn in a field.

Khen said he was also happier. “We can open or close the water gate,” he said. “Also the small water gate is allowing us to better regulate water and better distribute it to farmers in the commune.”

Careme said the restoration of the irrigation scheme had improved rice yields.

“It allows better production and therefore increases incomes through sale of rice,” he said.