PHNOM PENH, May 10 2011 (IPS) - The rains were kind to Cambodian farmer Tep Van last year, when the monsoon season doused his land with enough water to soak his fields and grow his precious rice crop. But he’s not sure he can count on the same luck this year. 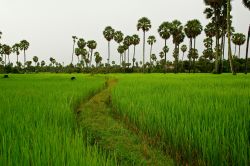 “In the past, we didn’t have to worry about the weather,” Van said, standing beside his field several kilometres outside the Cambodian capital, Phnom Penh. “But lately, it’s been a big problem.”

A few seasons ago, the rains were scarce. His parched crop withered without the moisture; nearly one-third of his seedlings didn’t make it to harvest.

Such patterns of irregular, unpredictable weather are what many climate scientists believe to be the effects of climate change. One season, there might be drought when rains should have fallen. The next, there could be more rain than the fields could handle.

Across the highway, farmer Yu Sok said people in his village have heard about climate change, but not all comprehend what it implies.

“Many people don’t understand climate change, but they understand the weather,” he said. “In the past, Cambodian farmers always planted rice according to the weather. But now the weather changes from year to year.”

New research released this week suggests such opinions are widespread in this South-east Asian country. The national study, which aims to quantify public perceptions of climate change in Cambodia, suggests that the majority believe it is affecting the country today, but do not necessarily understand the phenomenon.

The release of the climate change study comes as world leaders gather this week in Istanbul for a United Nations conference on least developed countries (LDCs), the first major summit of its kind in 10 years. Climate change is seen as a growing barrier to development in the world’s poorest countries.

Cambodia is one of the 48 LDCs recognised by the U.N. as “the poorest and weakest segment of the international community.”

Roughly 80 per cent of the population here lives in rural areas, and the majority of them rely on agriculture for their livelihoods.

Ninety-five per cent of respondents to the survey reported that weather changes had “affected” or “badly affected” their lives.

“Cambodians say that their weather and environment are changing and that they are feeling the effects,” the study concluded. “They report that extreme weather events, particularly drought, are more frequent and more intense than they once were and that temperatures have increased.”

Proponents of the study see it as a baseline assessment of where the country is in terms of climate change knowledge and where future efforts must be directed.

Yet most have a poor understanding of what’s causing it and, more crucially, how to adapt to its potential consequences.

“There were a lot of misunderstandings and gaps about climate change,” said Charles Hamilton, country director for the BBC World Service Trust, which implemented the survey for the country’s Environment Ministry. “It is a relatively new concept for Cambodia.”

For example, many respondents in the study also believed climate change to be a local issue caused by deforestation, as opposed to a global problem. And many appeared unsure about how to respond to the resulting consequences.

When asked what could be done to reduce climate change impacts on their livelihoods, one-quarter of the respondents said they did not know. Other common responses included “ask for donations” and “get air-conditioning.”

But the question of how to adapt to the effects of climate change could be one of the most crucial issues facing Cambodia over the long-term.

Recent studies have called Cambodia one of the countries in the world most vulnerable to the effects of climate change—it relies heavily on agriculture and inland fisheries to drive its economy and food supply, and has a low capacity to adjust if there are sudden changes to these sectors.

Cambodia has one of the lowest rice yields in the region. In 2009, the most recent year for which comparative statistics are available, Cambodian farmers produced an average of 2,836 kilograms of rice per hectare, according to the Food and Agriculture Organisation. In comparison, Vietnam produced almost double, at 5,228 kilograms.

If climate change, as some researchers have predicted, reduces crop yields in Cambodia, the country would be far less prepared than its neighbours to absorb the losses.

That’s why knowing where and how to target strategies to adapt to climate change is crucial, says Brian Lund, the East Asia regional director for Oxfam in Cambodia, which helped fund the national survey.

“The largest part of the community here are farmers, and they need to be able to adapt their farming systems so that as we see changes in climate, their systems are changing and keeping pace with the changes and then they can continue to farm effectively,” Lund said.

“If we don’t tell them, if there’s no information provided, then suddenly their systems start to fail and then you’ve got a major issue for the country. So from an LDC’s point of view, it’s about getting that capacity up so that you can properly respond.”

“We make the argument practically every six months or so. There’s a major meeting of heads (of state) around the world and we argue very strongly that at least 100 billion dollars should be made available to climate change adaptation,” Lund said. “The big piece is that development partners around the world are not contributing enough.”

A 2010 World Bank study estimating how much money developing countries would need to adapt to climate change pegged the figure at between 70 and 100 billion dollars a year, an amount comparable to the total yearly foreign aid budget of the world’s developed countries today, the report stated.