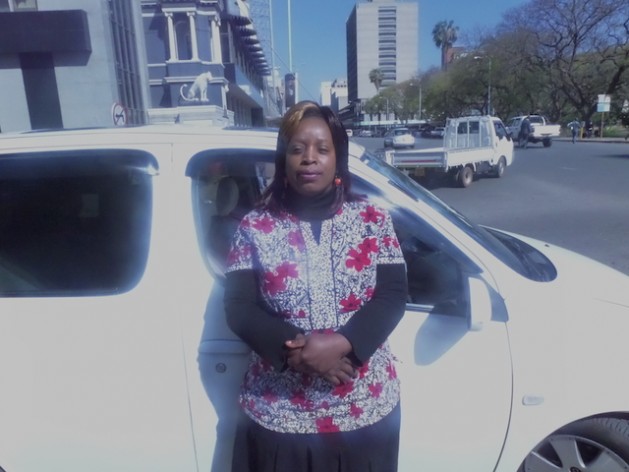 Taxi driver Jesca Machingura is one of the few women who has been involved in the industry for 15 years. With the income she earns she has been able to send her daughter to university in South Africa. Courtesy: Jeffrey Moyo

HARARE, Aug 8 2014 (IPS) - Mavis Gotora from Mabvuku high-density suburb, in Zimbabwe’s capital, Harare, walks up and down, as she persuades one passer-by after another to board the private taxi cab she drives.

But eight years ago when she first started in this industry things weren’t so easy for her. “I had to fight hard [and was] competing against verbally-abusive male taxi drivers who envied how I easily got clients,” she tells IPS.

“The male taxi drivers who felt challenged by my presence on the streets where we scrounged for clients would call me all sorts of names, at times labelling me a whore. But I remained unbreakable as I fought my way through to live on in the industry,” says Gotora.

Gotora says eight years ago she was unemployed and had no other option except to try taxi driving.

“Most women scramble for jobs as hairdressers and as vendors on street pavements. But hit hard with joblessness, I said let me try taxi driving after I had obtained a driver’s licence in 2005,” explains Gotora.

Now she says her fortunes have turned around.

“I’m now a proud owner of a housing stand, with my new home at foundation level. I also bought my own car, which is still being shipped from Japan, which I’m going to convert into a taxi and [start my own business],” adds Gotora.

But she is not the only woman who has turned to the transport sector looking for a job.

According to the Female Drivers Association of Harare (FEDAH), an independent organisation of women drivers, there are currently 3,200 women drivers in public transport countrywide, with 22,5 percent of these driving private taxis cabs.

FEDAH chairperson Lynette Muzondiwa attributed the presence of women in what was formerly a male-dominated job to the harsh economic conditions in this southern African nation.

“For over a decade the Zimbabwean economy has been shrinking, leaving many people including women out of employment and consequently forcing women to turn to any jobs even those dominated by men. That is why today other women have turned to driving taxis,” Muzondiwa tells IPS.

Surveys conducted by FEDAH from 2007 to 2013 shows that the number of female taxi drivers has been steadily rising.

“As taxi drivers, we are obliged to meet a weekly target of 250 dollars, which is submitted to the taxi owner and whatever remains is the driver’s commission and this is unlike the little moneys women vendors make daily on the streets,” Murwira tells IPS.

But she agrees with Gotora that its not always an easy environment for women to work in.

“We have to outdo each other on the streets as private taxi drivers, mostly against our male counterparts begrudging us for being more appealing to customers than them.

“On the other hand some of our unscrupulous clients at times pester us for sexual favours,” Murwira says.

But Murwira said she used to make about 25 dollars a week selling sweets and mobile phone recharge cards. But now her earnings have increased.

“Each week I make about 400 dollars, out of which I take 250 dollars to surrender to my employer, meaning every week I often carry home 150 dollars, adding to 600 dollars in monthly earnings,” says Murwira.

“Women are quite rare in terms of being taxi drivers. In business you have to introduce newness always for a business to survive. The taxi business is a money-spinning venture where you have to entrust your resources on trustworthy characters, and women drivers fit easily into that bracket,” Dlamini tells IPS.

“Women again are not reckless drivers unlike their male counterparts,” he adds, adding that passengers feel safer with women drivers.

For Gotora and many other female drivers here, with government behind them, better days may be looming.

The writer can be contacted at: moyojeffrey@gmail.com