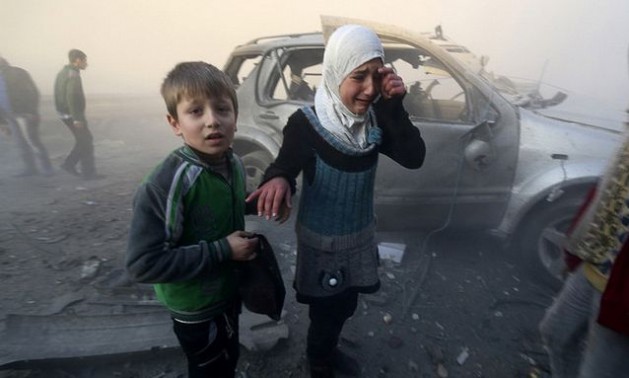 A girl cries near a damaged car at a site hit by what activists said were barrel bombs dropped by government forces in Aleppo's Dahret Awwad neighbourhood Jan. 29, 2014. Credit: Freedom House/cc by 2.0

UNITED NATIONS, Feb 24 2015 (IPS) - The warring parties in the brutal four-year-old military conflict in Syria, which has claimed the lives of over 200,000 civilians and triggered “the greatest refugee crisis in modern times,” continue to break every single pledge held out to the United Nations.

Despite Secretary-General Ban Ki-moon’s plea for a political rather than military solution to the country’s ongoing civil war, both the Syrian government and the multiple rebel forces continue to escalate the conflict with aerial attacks and artillery shelling, hindering the delivery of humanitarian aid.

“Amid talk of a possible temporary cessation of strikes on Aleppo, the question is whether Russia and China will finally allow the U.N. Security Council to impose sanctions to stop barrel bombs.” -- Nadim Houry

But the worst of it, says Human Rights Watch (HRW) in report released Tuesday, is the use of locally improvised deadly “barrel bombs.”

By examining satellite imagery, HRW said, it has identified at least 450 distinct major damage sites in 10 towns and villages held by rebel groups in Daraa and over 1,000 in Aleppo between February last year and January this year.

“These impact sites have damage signatures strongly consistent with the detonation of large, air-dropped munitions, including improvised barrel and conventional bombs dropped by helicopters. Damages that possibly result from the use of rockets, missiles, or fuel-air bombs are also likely in a number of instances,” the group said.

According to HRW, barrel bombs are unguided high explosive weapons that are cheaply made, locally produced, and typically constructed from large oil drums, gas cylinders, and water tanks, filled with high explosives and scrap metal to enhance fragmentation, and then dropped from helicopters usually flying at high altitude.

Asked if the explosives in the barrel bombs originate either from Russia or China, two strong political and military allies of the regime of Syrian President Bashar al-Assad, the United Nations Director of HRW Philippe Bolopion told IPS: “We are not in a position to say where the high explosive is coming from but barrel bombs are pretty primitive and made from commonly found materials.”

With the 15-member Security Council deadlocked over Syria, there is little or no hope that Russia and China, two members with veto powers, will ever relent or penalise the Assad regime despite several resolutions.

“We certainly hope they will stand by their own resolution and impose consequences on the regime for thumbing its nose at the Security Council,” Bolopion said.

Asked if protests by HRW and other human rights organisations will be an exercise in futility, he said: “Sadly, when thousands of civilians are being slaughtered, we have to continue to place the Security Council, and Russia and China in particular, in front of their responsibilities, no matter how futile it may sound.”

“Amid talk of a possible temporary cessation of strikes on Aleppo, the question is whether Russia and China will finally allow the U.N. Security Council to impose sanctions to stop barrel bombs,” Houry said.

The Security Council is expected to meet Thursday for its next round of reporting on resolution 2139 of Feb. 22, 2014, which demanded that all parties to the conflict in Syria end the indiscriminate use of barrel bombs and other weapons in populated areas.

The Security Council should impose an arms embargo on the government as well as rebel groups implicated in widespread or systematic indiscriminate attacks, HRW said.

The government attacks have led to the death and injury of thousands of civilians in rebel-held territory, according to HRW researchers.

During the same period they have documented 2,576 civilian deaths in Aleppo governorate from aerial attacks, including 636 children and 317 women.

While deaths from aerial attacks are not exclusively from barrel bombs, residents from rebel-held territory in Daraa and Aleppo told HRW that barrel bombs account for a majority of air strikes.

Last week, Ban appealed to all parties to de-escalate the conflict in order to provide a reprieve for the long-suffering civilians of Syria. An immediate de-escalation is a much needed step towards a political solution to the conflict, he added

U.N. Special Envoy Staffan de Mistura told the Security Council last week that the Syrian government has committed to suspend all aerial attacks and artillery shelling over the entire city of Aleppo for a period of six weeks.

This is in order to allow the United Nations to implement a pilot project of unhindered delivery of humanitarian aid starting with one district in Aleppo and building incrementally to others.

Ban said Security Council resolution 2139 called for an end to the indiscriminate employment of weapons in populated areas in Syria, including shelling and aerial bombardment, and expects the Syrian government to follow through on its commitment.

The secretary-general also appealed to all armed opposition groups in Aleppo to suspend their shelling of the city.

He pointed out that the last four years of war have led to the deaths of over 200,000 civilians, the greatest refugee crisis of modern times and created an environment in which extremist groups and terrorist organisations such as ISIL/Daesh flourish.

The secretary-general recalled Security Council resolutions 2170 and 2178 and stressed that there is no military solution to this conflict.

“This is a political conflict. Ending the killing, reversing the increasing fragmentation of Syria requires a political process, based on the full implementation of the Geneva Communique of 2012, that addresses the deep roots of the conflict and meets the aspirations of all Syrians,” he added.