NEW YORK, Apr 22 2015 (IPS) - On Earth Day, Apr. 22, Kenyan activist Phyllis Omido takes the stage in Washington DC to receive the Goldman Environmental Prize for her efforts to defend her community from lead poisoning and force the closure of a lead smelting plant that was emitting fumes and spewing untreated acid wastewater into streams, poisoning the neighbourhood – including her own baby. 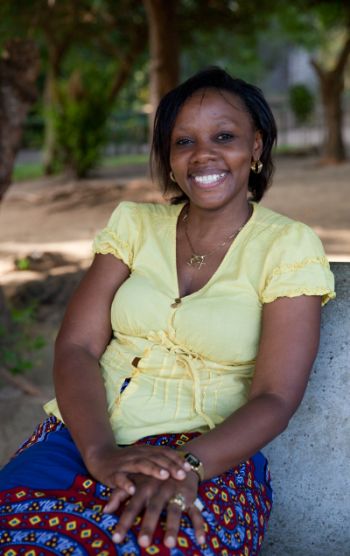 Courtesy of the Goldman Prize.

“At first we thought he had malaria or typhoid, but doctors found he was suffering from lead poisoning,” Omido recalled. The lead was traced to a smelter where Phyllis had recently started work as a community liaison officer.

“The doctors said the lead reached my baby through my breast milk,” Phyllis said in London last week as she made the trip to the U.S. to receive the Africa award of the prestigious Goldman prize.

The smelter – built in the heart of Owino Uhuru, a densely-packed slum in Mombasa, Kenya’s second city – extracted lead from used car batteries. Lead is a potent neurotoxin. It damages the development of children, targeting the brain and nervous system.

The smelter began operations in 2009 without any environmental impact assessment (EIA). One of Phyllis’s first jobs was to commission one. The findings revealed that the smelter was poisoning the neighbourhood, but the company was unwilling to move.

“I went to the company’s directors and the government’s environment agency, which had licensed the smelter. I showed them reports from lead experts. But nobody wanted to listen,” she says. Meanwhile, children were getting sick; women were having miscarriages; even the neighbourhood chickens were dying.

She claims that the company routinely sacked workers after a few months because it knew their exposure to lead was unsafe. But after a worker died, the community held a demonstration. A local MP, who was also a minister for the environment, came. “We hoped he would help. But he said we should keep quiet because the company brought jobs. He accused me of being in league with his political opponents.”

After a long struggle, with help from Human Rights Watch and the U.N. special rapporteur on toxic waste, she was able to see the company close the plant in 2014.

Since then, she has set up a local NGO, the Center for Justice, Governance and Environmental Action, to fight other causes like salt miners who are damaging Kenya’s nearby coastal fisheries. And she has more work to do in Owino Uhuru.

Omido and the other prize recipients – from Myanmar, Canada, Haiti, Scotland and Honduras – will each receive 175,000 dollars for their ongoing work. Dana King and conservation scientist Dr. M Sanjayan will be Masters of Ceremonies. For more information about the prize, visit the website.