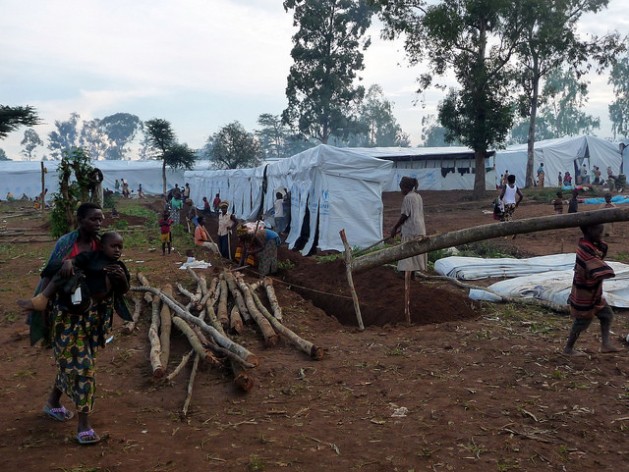 Burundi refugees at the transit centre of Busegera in Rwanda. Credit: EU/ECHO/Thomas Conan

UNITED NATIONS, Jun 4 2015 (IPS) - As the U.N. Security Council met to discuss the ongoing political crisis in Burundi Thursday, a rights group says violence has intensified in the capital Bujumbura, with individuals and groups close to the presidency and the ruling party targeting civil society activists, journalists and opposition members.

Presidential and parliamentary elections were postponed this week after almost daily protests in the capital since April over President Pierre Nkurunziza’s bid for a third term in office.

On June 2, U.N. Spokesperson Stéphane Dujarric told reporters that the Secretary-General’s Special Envoy for the Great Lakes, Said Djinnit, had returned to the capital after attending the East African Community Summit on Sunday. But diplomatic efforts have so far failed to resolve the standoff.

Since early April, nearly 100,000 Burundians have fled their country, according to U.N. estimates, including many staff from independent media organisations. Meanwhile, those who stayed say they fear for their security if they continue to do their jobs.

“They want to break the journalists’ morale. There is harassment, phone calls, threats, blacklists,” Innocent Muhozi, the head of the Burundian Press Observatory, told the Guardian. “Some have gone into exile, others are in hiding.”

According to another media analyst and blogger in Bujumbura, “As an activist active on social media, I cannot sleep at my house any more, I cannot even stay there anymore. If I continue to work the way I did before, I risk death…The Imbonerakure have weapons and their verbal assaults spread terror.

“They say, for example: if you don’t vote for the party, we will slit your throats. They sometimes wear police uniforms, sometimes the t-shirts of the ruling party. I was personally assaulted three times. The first time, I was verbally assaulted, along with my team, by Imbonerakure bearing sticks and clubs. The second time, they broke my equipment. The third time, in the city center, a police officer hit me twice and told me: ‘If you don’t leave the area, I will shoot you down.’”

A journalist working for a radio station burned down after the coup attempt says, “The slogan of the Imbonerakure, which has even became a song, is ‘we are going to wring you out’ [tuzobamesa]. When they sing this song, they most often burst a balloon with a needle, to imitate the noise of a gun. They call the people who do not follow their group ‘Ivyitso’, literally ‘the enemies’, ‘those who are against us.’”

According to Cléa Kahn-Sriber, head of the Africa Desk, Reporters Without Borders, “A war of information is being played out in Burundi. Reporters without Borders calls on the Burundian authorities to provide credible guarantees for the protection of journalists and the reopening of what remains of private media.

“Returning to free and pluralist information is essential to avoid disinformation and de-escalate rumors which only fuel conflict. Legitimate elections wouldn’t be conceivable unless media outlets can work without restriction and journalists can report and inform the population freely.”

Calling for stepped up efforts by the U.N. and others, Thierry Vircoulon, project director for Central Africa at International Crisis Group, said, “The international community has invested so much in negotiating and implementing the Arusha agreement. If Burundi returns to conflict, it will be a terrible blow for the region but also for the credibility of all peacebuilding processes in the world.

“It will send the message that peacebuilding is just a waste of time and money.”